Tetrarc calls upon the inherent power that shimmering and shiny things have over most observers’ eyes and uses bold metallic and reflective features to make an impact on the developing neighbourhood of Port Marianne, at the eastern edge of Montpellier. 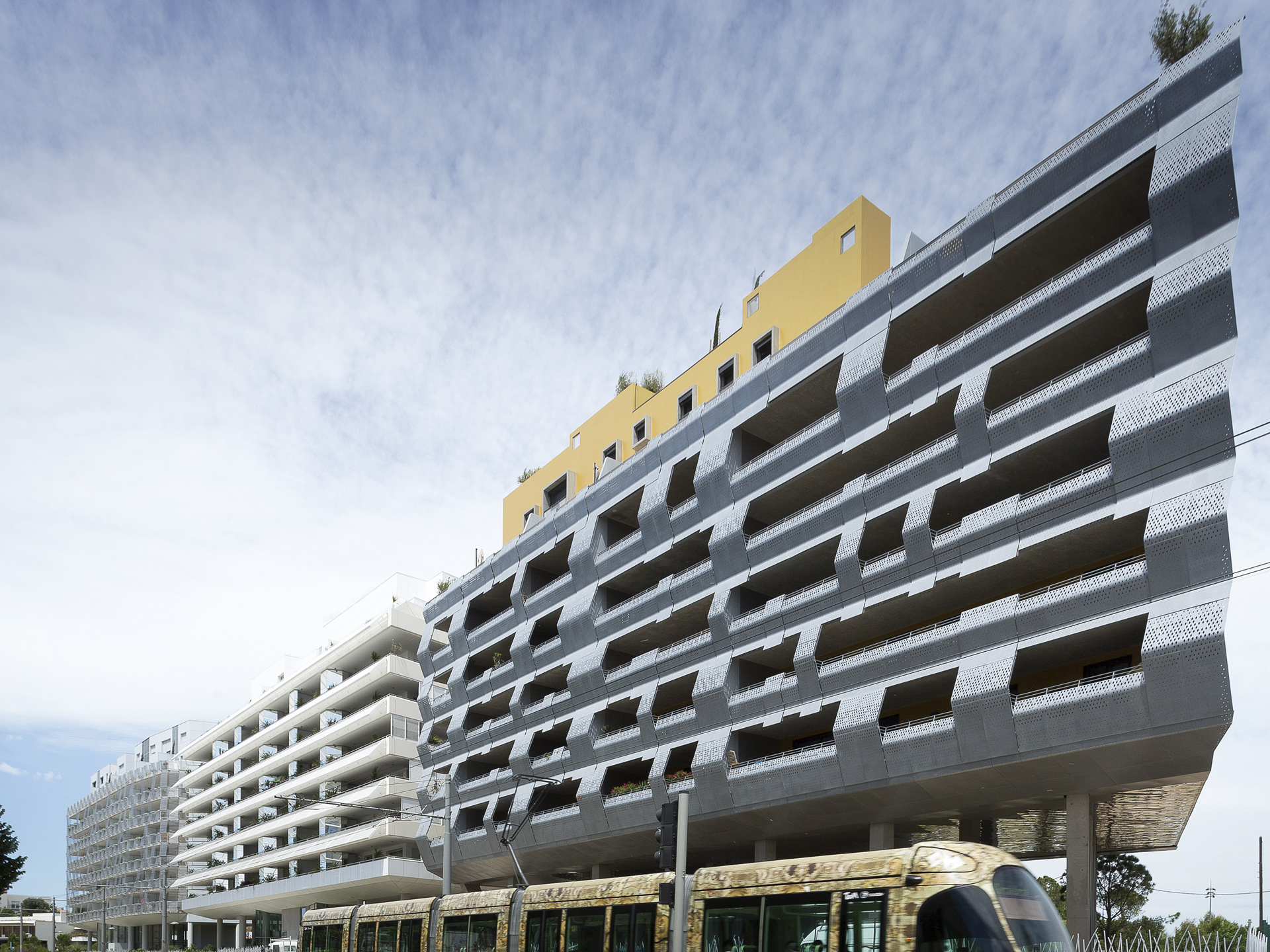 Although the residential block has similar volumetric features as the two residential buildings beside it, the multiplicity of Platinium’s façades steals visitors’ gazes away. 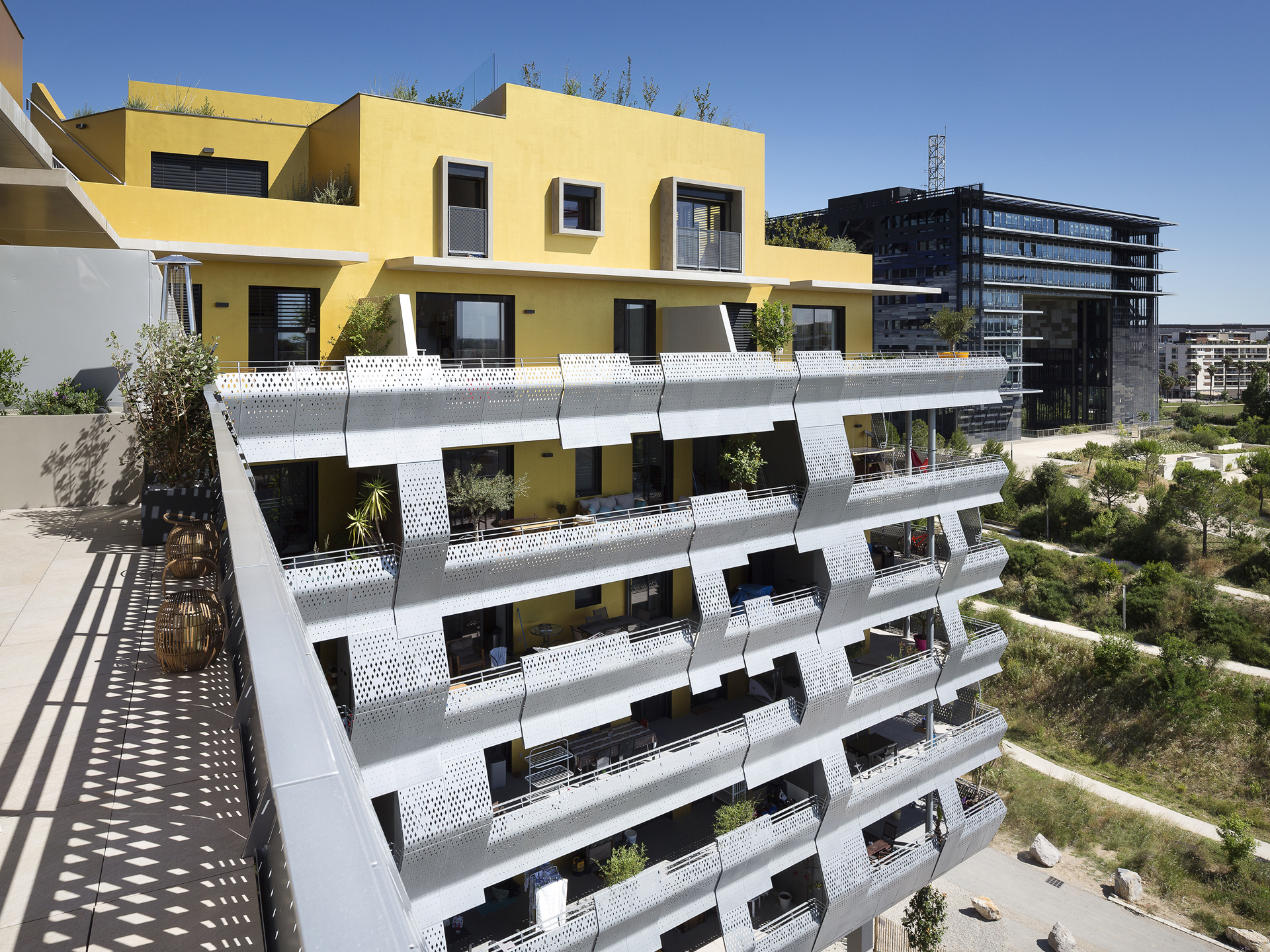 The gold-based building takes an L-shaped form, leaving a fourth of the plot as a garden. Tapered beams and concrete piers under the first storey hold up the seven-storey block to open up a generous 6-m high entrance lobby towards the park behind, giving a sweet little glimpse at Jean Nouvel’s Hotel de Ville, featured in Mark #41.

Colourful pendant lighting welcomes residents and visitors, with a mirror-finish cladding the soffit – warped in a fashion to distort the landscape of the ground floor. 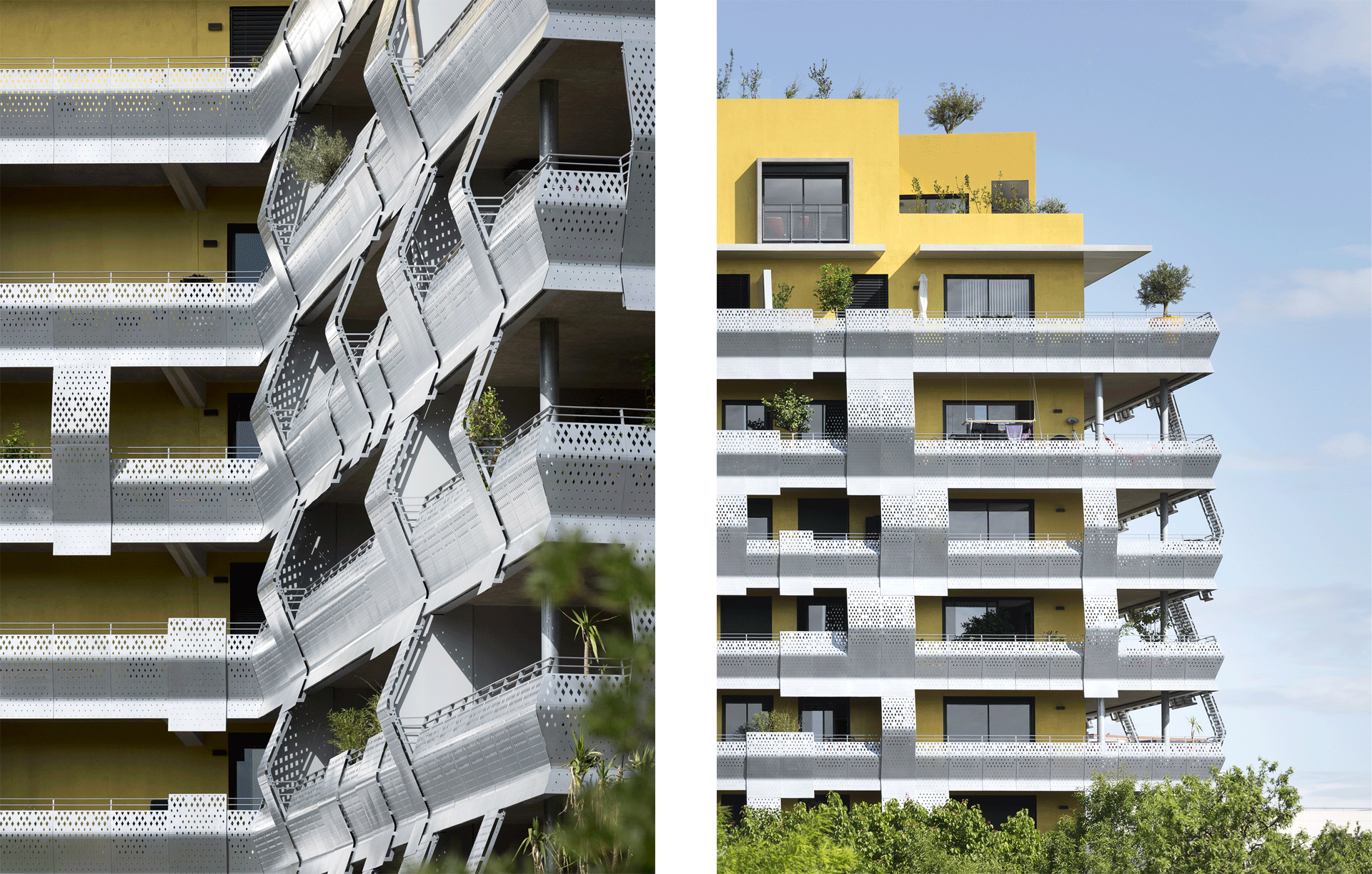 The floorplates jut out and create well-shaded exterior spaces for each of the 60 apartments. The undulating metallic façade elements are draped over as additional coverage from the sun-soaked Mediterranean setting. Perforations on these panels let the golden core seep out. The gold coating of the walls gives the entire building an exotic touch and compliments the cool and harsh silver colours of the second exterior ‘skin’. 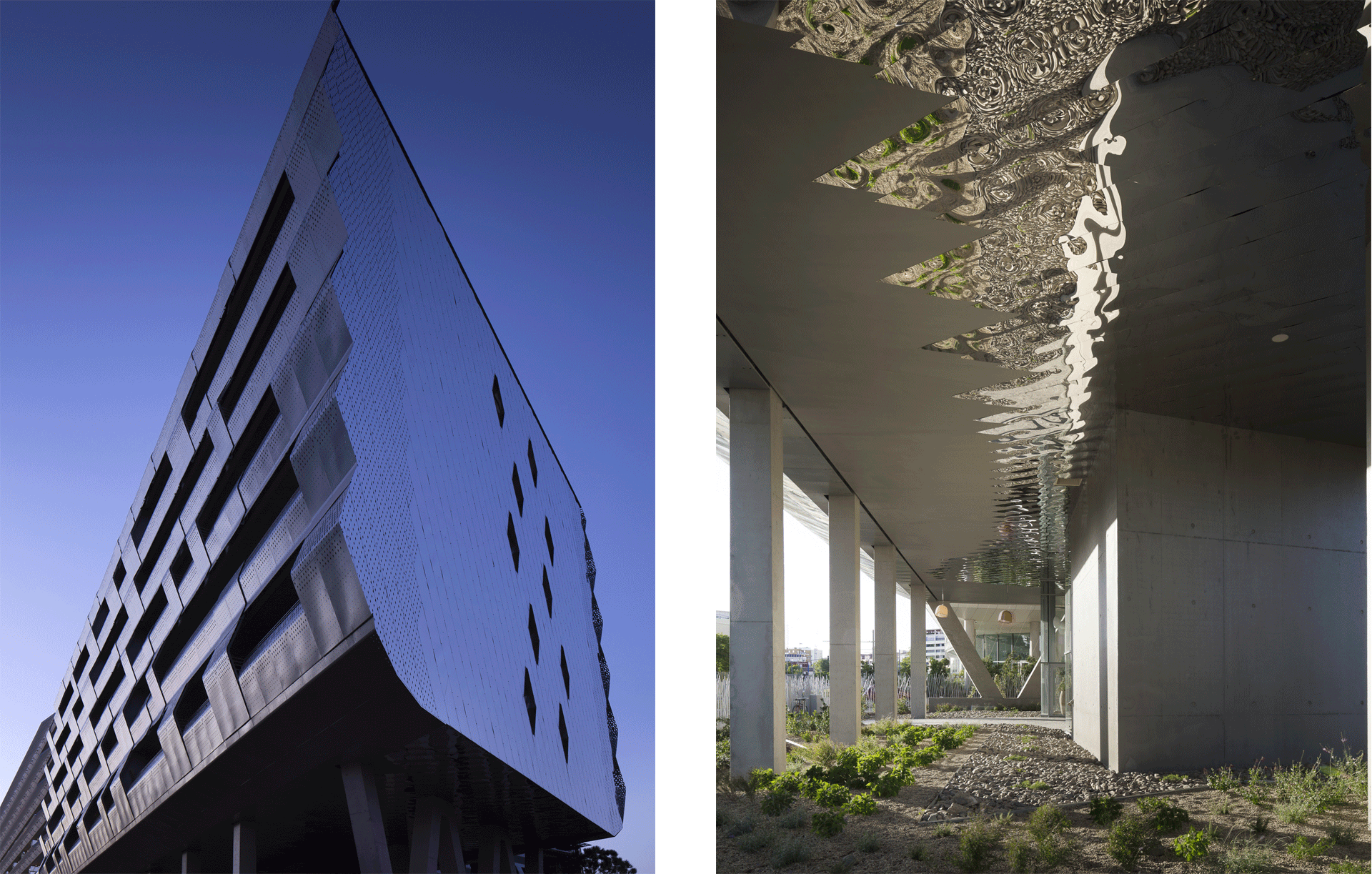 A mirror cladding slithers from underneath the first floor and takes over the entirety of the South façade. Diamond-shaped openings are formed by the layout of the finishing. Although at the moment it reflects the sky, in the not-so-distant future, new developments on the southern end of Port Marianne will come up to look at their own reflection. 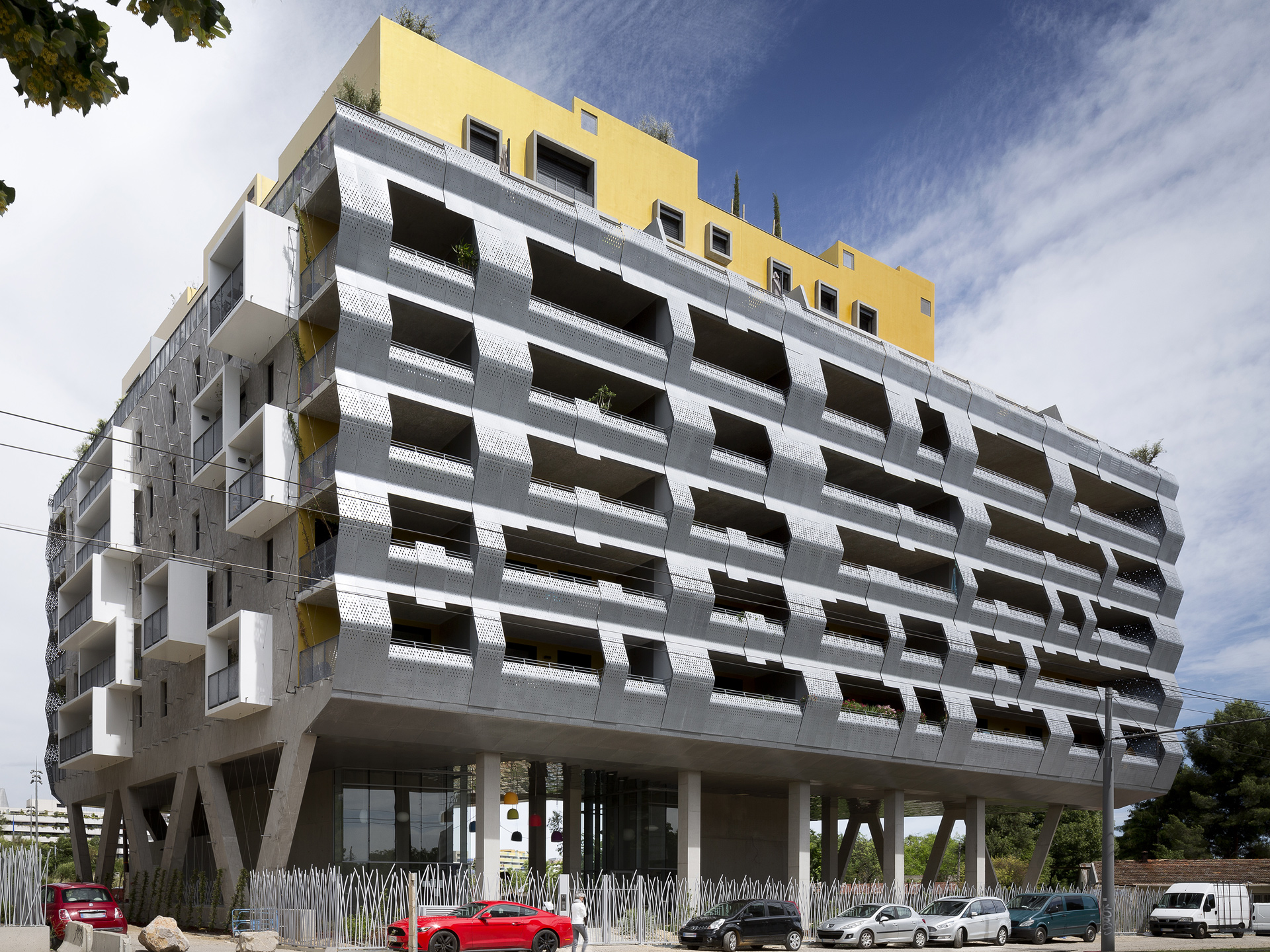 Tetrarc has big plans for the northern elevation, which will be home to a future green wall. At the moment the façade is defined by the protruding white openings and balconies. Vegetation takes centre stage already on the roof where every available area is filled in as a roof garden.

Each façade gets a distinct identity, but the entire project is crowned by the last two storeys of residences – a final moment where gold is unbound and unchained, the metallic hues captivating visitors. 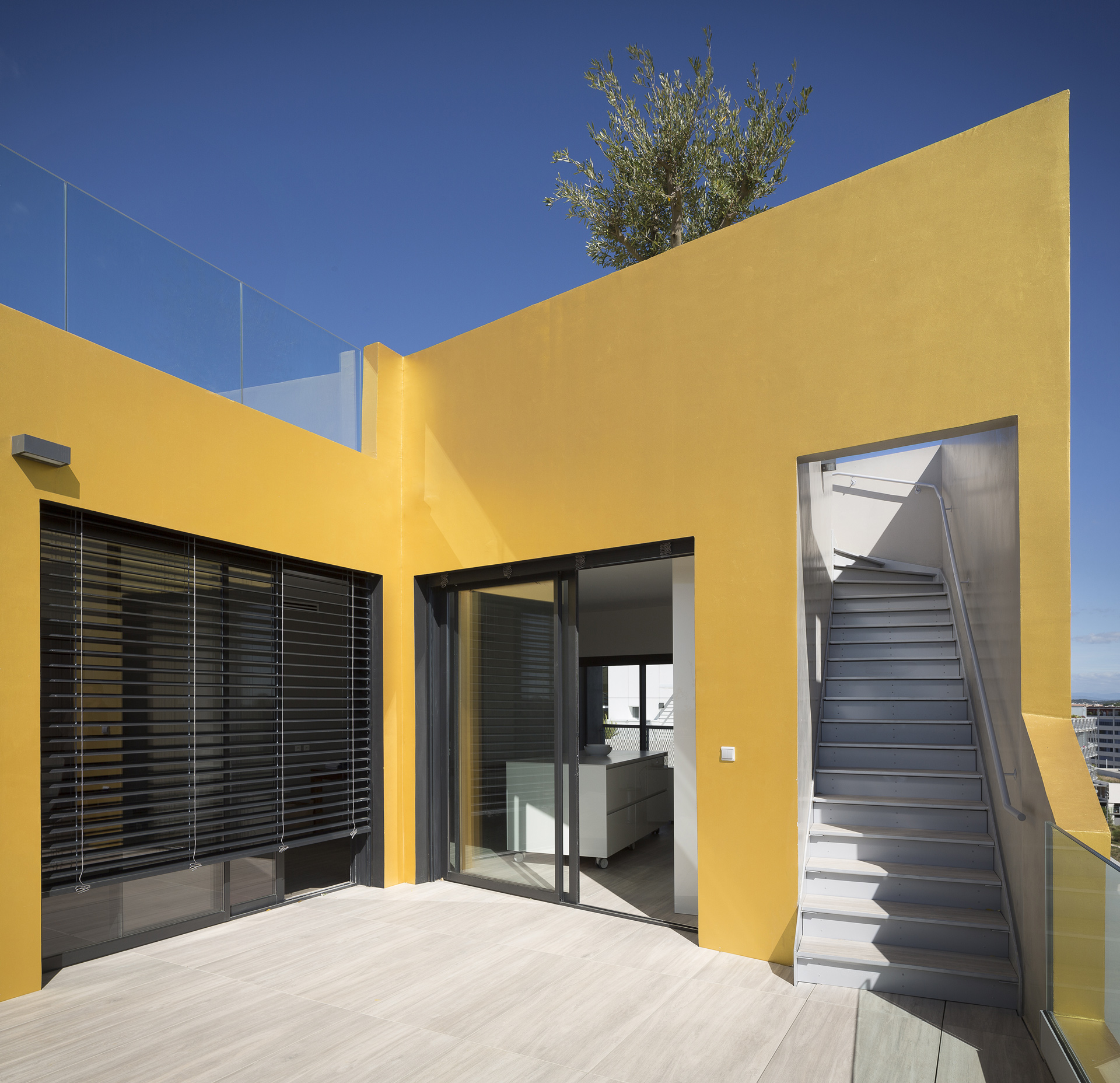