How can design open the door to diversity?

With only three per cent of all practitioners across industries being Black, according to The American Institute of Graphic Arts, design exhibits the same biases, stigmas and stereotypes as most other professions. Worse, it often does so from behind an outwardly liberal and inclusive facade. How do we create redress, and, importantly, make it last longer than one news cycle? That was the question Frame founder Robert Thiemann wanted to bring to the latest #FrameLive panel, including Bhavin Taylor, founder of the eponymous London-based interior-design studio, and Stephen Burks, founder of New York-based practice Stephen Burks Man Made.

Taylor opened with an image from the 2016 film Hidden Figures, which showed actress Octavia Spencer as mathematician Dorothy Vaughn, standing in the centre of a room of white males. Taylor felt that Vaughn’s struggle as a black woman trying make herself visible within her industry resonated with BAME designers’ experience of entering the creative arts. ‘When I grew up there were never any role models, be that in magazines, TV, or in the industry itself,’ he explained. ‘I had no one to look up to.’ Taylor noted that when he studied interior design, he was one of only two people of colour in his class, something that he links directly to this lack of aspirational figures. ‘Coming from an Indian background, a career in a creative field isn't the norm – it’s not seen by our parents as offering enough security’.

The question of why there aren't more people with a BAME background in our industry is a bit ridiculous. . .it’s a question of the advantage versus the disadvantage

Burks thought ‘the question of why there aren't more people with a BAME background in our industry is a bit ridiculous. . .it’s a question of the advantage versus the disadvantage,’ he stated. ‘And the disadvantage has been being disadvantaged for hundreds of years.’ He agreed that media does – or rather should – play an important role in resolving this, though too often the press pay little more than lip service to the issue of diversity. ‘If we look at this panel, if we look at the way the media, and let's say, white people in general, approach this problem, it’s always to make it the black man's responsibility to answer the question. Why, why, why? And it's always the white man's responsibility to apologize.’

Retelling one of his early encounters with the press, Burks demonstrated how ingrained the marginalization of Black creatives really is, even when dealing with publications seemingly intent on promoting them. ‘I'd only been working a few years and I had reached a point of success that was somehow notable to The New York Times,’ he explained. ‘At the time I didn't see myself as a Black designer. I just saw myself as a designer coming from New York, and wanting to make my way in the world of design.’ When the article came out, he was shocked at how the piece was positioned, running under the tagline ‘Puff Dada’. ‘From the point of view of the editorial staff of The New York Times, I had to be associated with Puff Daddy and with the rap industry. . .it’s almost as if you can't see us unless we exist in those stereotyped industries – in entertainment and athletics. Otherwise, there's no room.’ 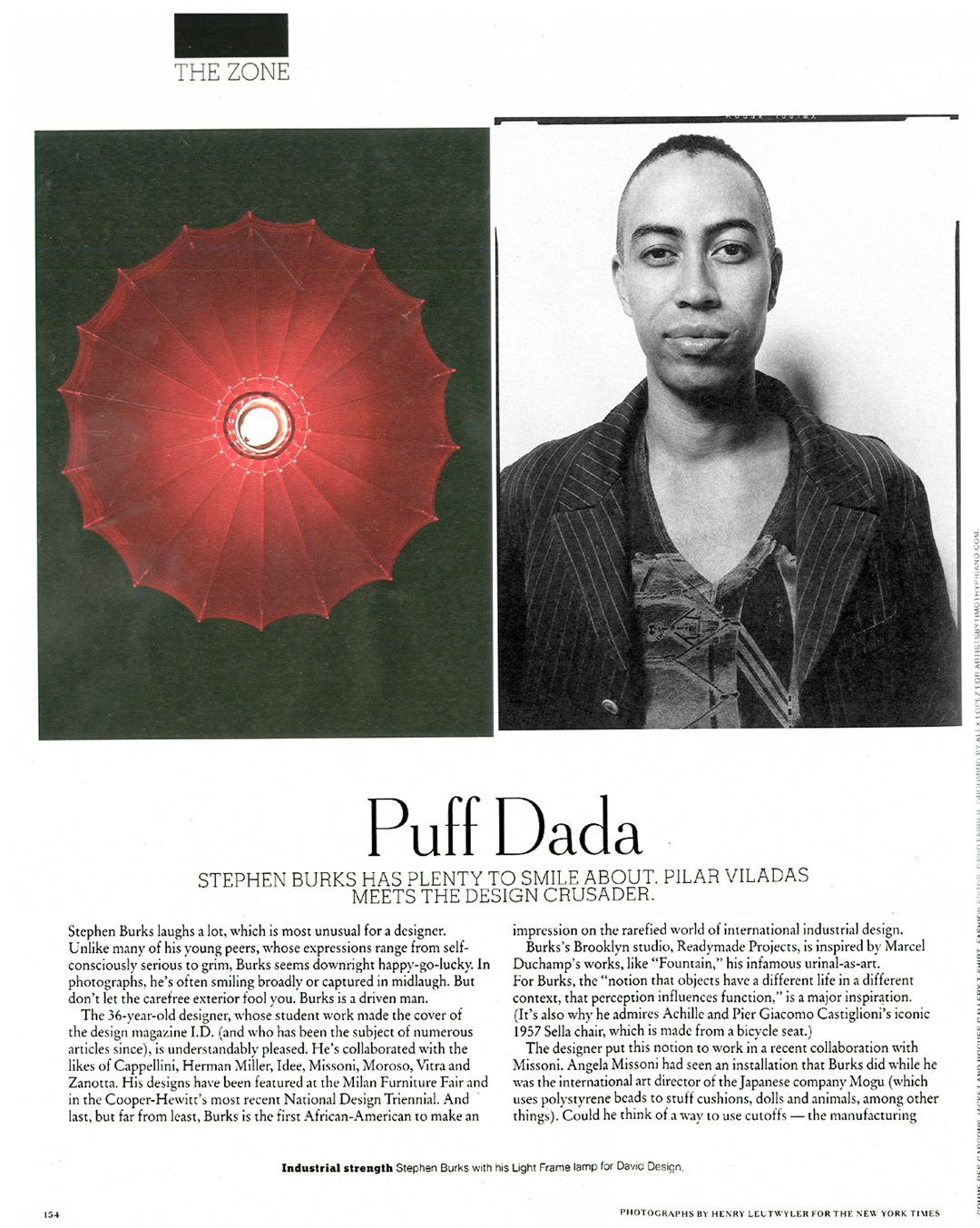 Though the ability to broadcast has now been somewhat democratized, new media remains a difficult landscape in which to host these conversations. Sharing a picture of his niece holding up a handmade Black Lives Matter poster, Taylor talked about his anger at how some had taken the protest as a marketing opportunity. ‘I posted [the picture] on social media a few weeks ago saying that, you know, this topic of discussion isn't something for influencers to use for popularity. It's an actual topic that affects many people. It's not to create any form of fame.’

[The major and trade media outlets] need to collaborate, employ, contract and, most of all, promote us as designers, so that we educate the new generation that we’re here

In response, Burks highlighted the importance of taking the time to really think about what you want to communicate, and how you should communicate it. ‘I was asking myself at that moment, what can design do? And what do I want to say, as a designer?’ For him that manifested as a platform which explores the subject of ‘designing diversity’, where people can come together to ‘begin to speak to the need for the collective imagination of the design industry’. This sort of initiative was something Taylor wholeheartedly agreed with. ‘It comes down to everyone needing to make some noise. . .not least the major and trade media outlets,’ he said. ‘They need to collaborate, employ, contract and, most of all, promote us as designers, so that we educate the new generation that we’re here. We're also educating their parents, so that they can understand what the creative industry is.’

The conversation wrapped up with Thiemann reversing roles and inviting questions to him as a member of an industry that has, thus far, failed to make many truly positive steps towards diversity. Burks pointed out that ‘everyone's probably wondering how many people of colour Frame currently employs. It's great to listen to the voices of people of colour, but I think you also have to be questioning yourself, because you have to open that door.’

People of colour have to rise to positions of ownership

As business founders, both Burks and Taylor concluded the talk by illustrating how they and others had already forced their way through that gap – however small – and that more would have to do so in order to make it wider. ‘I'm the kind of personality that, even if there was a closed door, I’m going to push really hard,’ said Taylor, citing the importance of more people committing to taking ‘the first few steps to then create a path for everybody else’. ‘People of colour have to rise to positions of ownership,’ echoed Burks. He explained that, while becoming a successful independent was hard-fought – especially without the sort of familial support often available to white counterparts – it could prove crucial in accelerating change within the design industry. ‘It's not about waiting for inclusion – waiting for that door to be opened from people outside. It’s about owning the position ourselves, owning the media outlets and owning our own studios.’

Read about more past and upcoming #FrameLive events here.