If the walls of Milan’s Kursaal Diana Theatre could talk, they’d tell a story even richer than that of Desdemona and Othello, of Helena and Bertram – they’d tell the story of a city. Designed by Achille Manfredini in Italian Liberty style in 1908, Kursaal Diana was one of the most important entertainment venues in Milan, a setting rife with history. After playing a second act as a cinema in the latter half of the 20th century, the building still stands today, albeit for different type of theatre – retail.

Inside the landmark – which also houses a Sheraton hotel – local firm Storage Associati revamped 2,400 sq-m for Bally’s new offices and showroom. The team’s design intentions coincided seamlessly with the building’s history: the Swiss luxury fashion house wanted to create a showroom akin to an open-space amphitheatre, a place in which the brand’s modernist heritage could be effortlessly translated.

That’s why the team at Bally calls the entrance lobby their theatre foyer – upon walking in, one’s eye is first caught by a round, neon logo chandelier hanging from a striking domed roof. Raw white-washed walls give way to three passages made of red marble and brass with revolving doors that lead into the showroom. Blacked out windows were exchanged for transparent, frameless ones, dousing the space in natural light. It’s a cinematic entrance, but not an exclusive one: the foyer was designed to also act as a gallery with rotating displays, so as to convey Bally’s aesthetic ethos to the community. 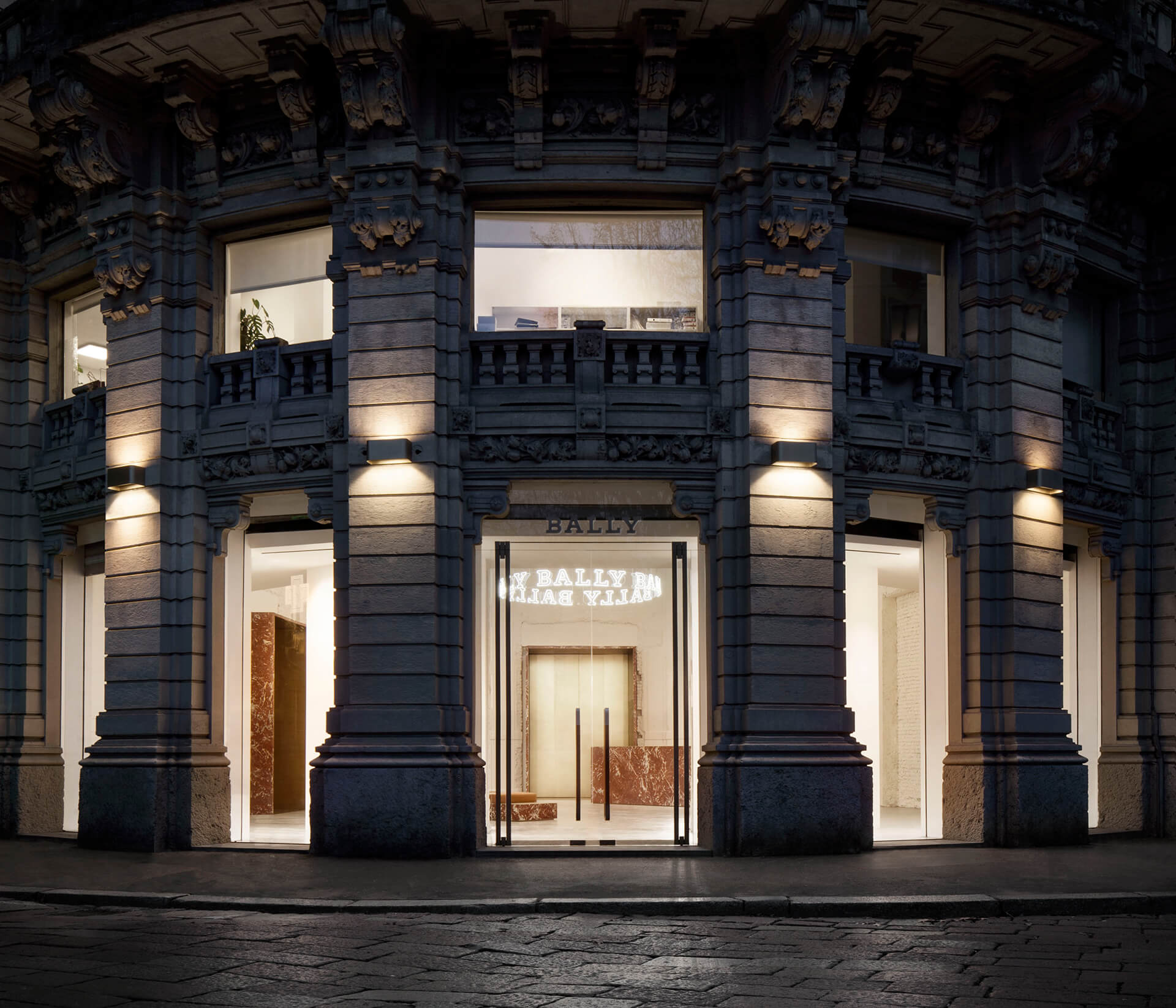 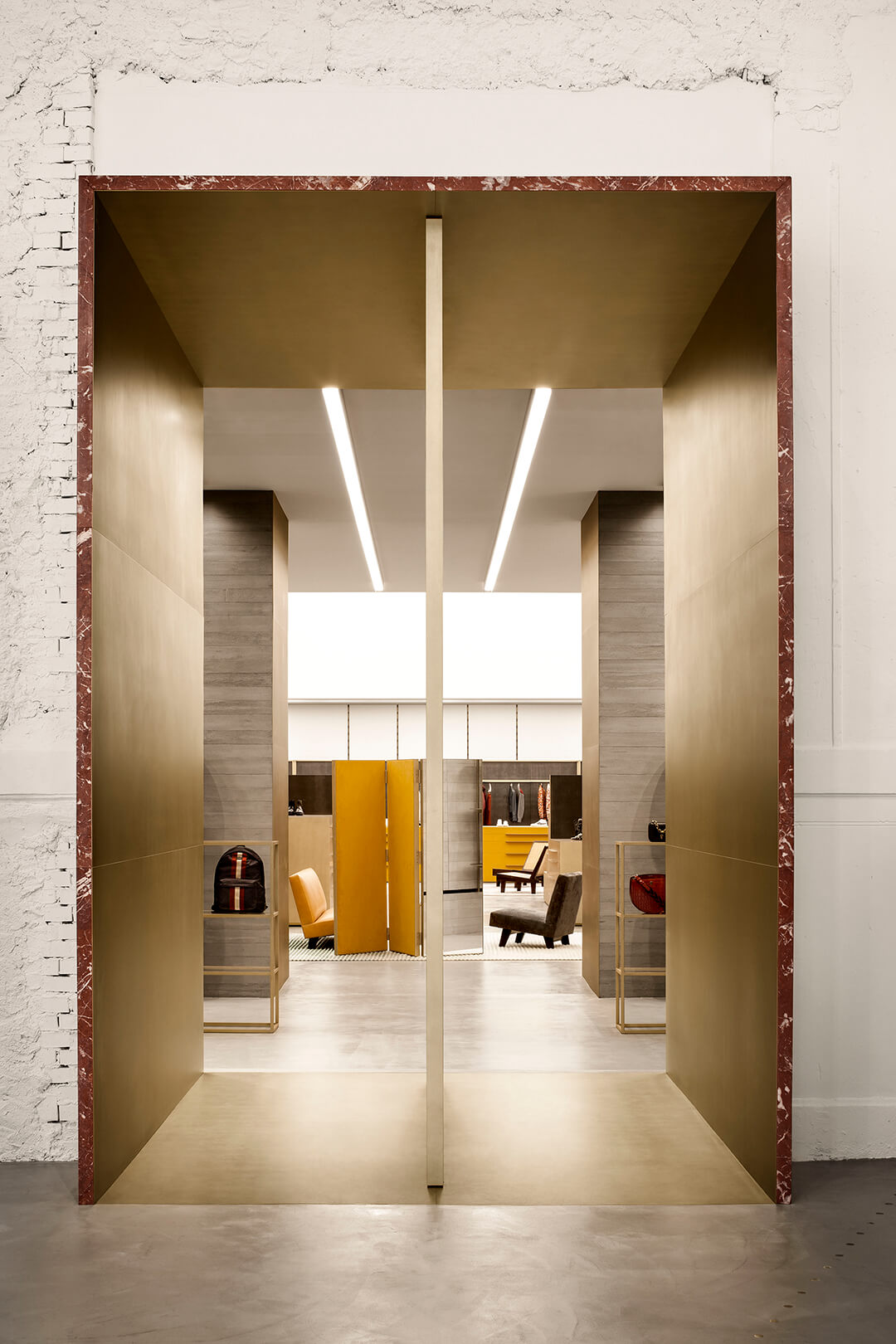 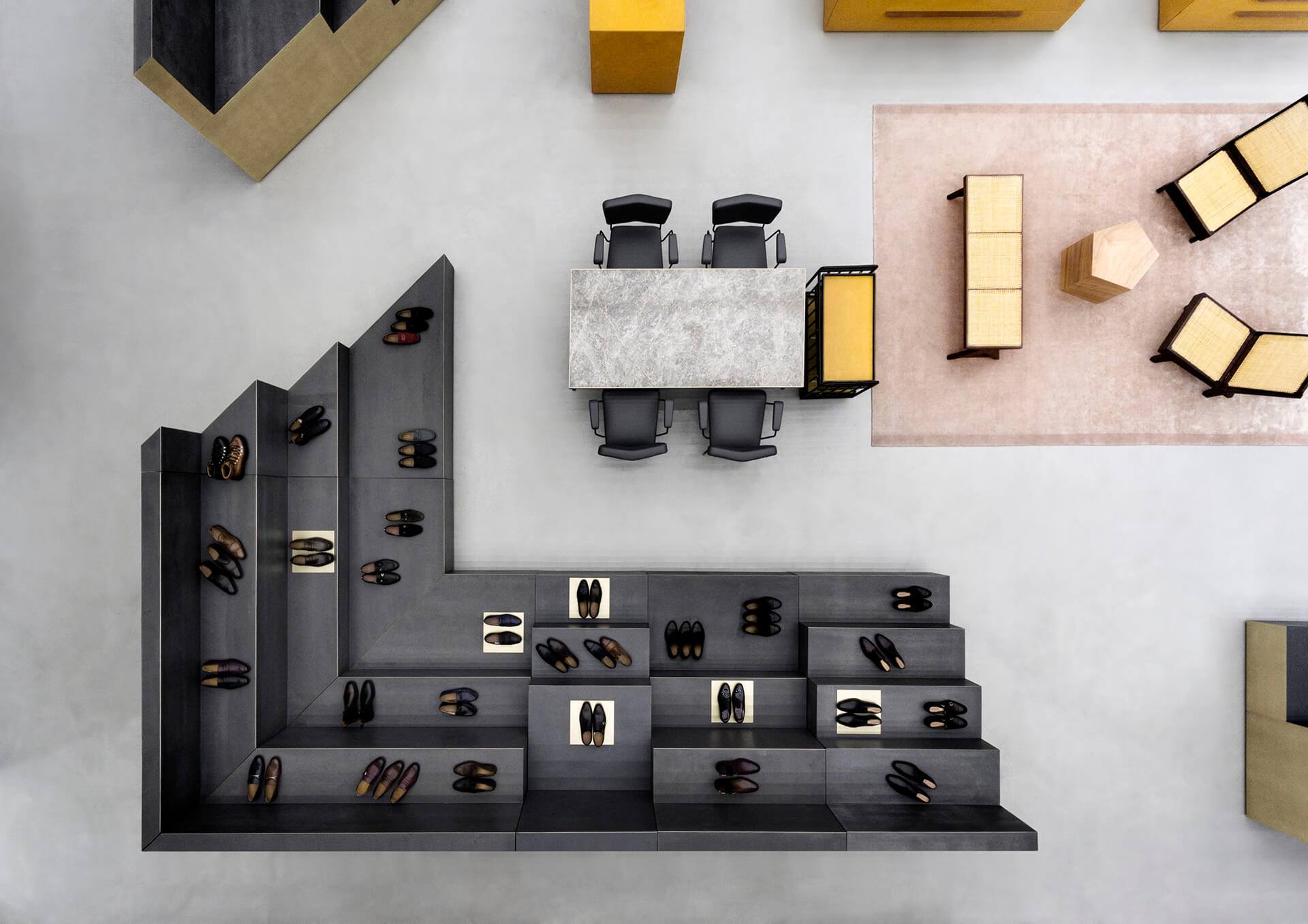 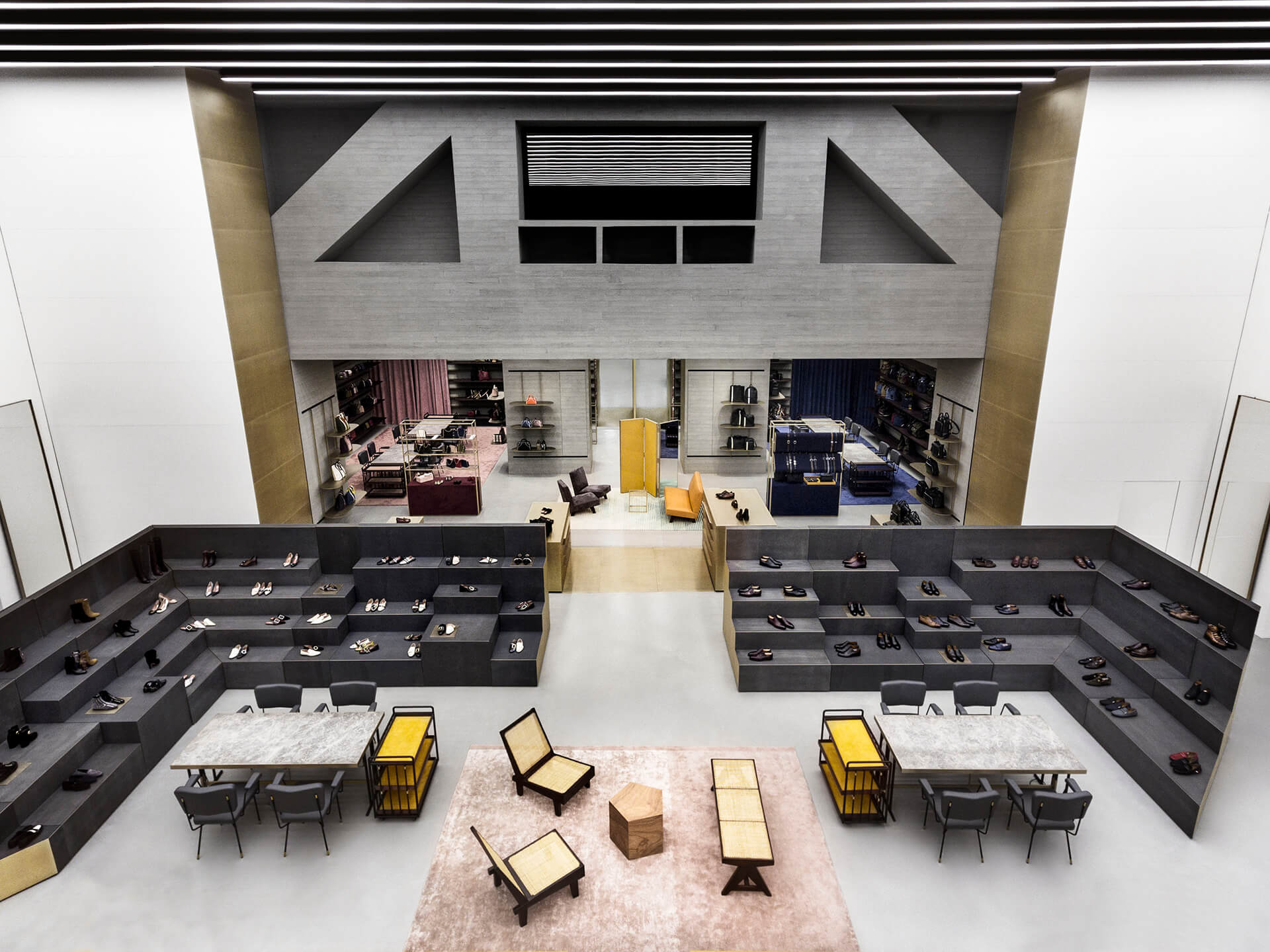 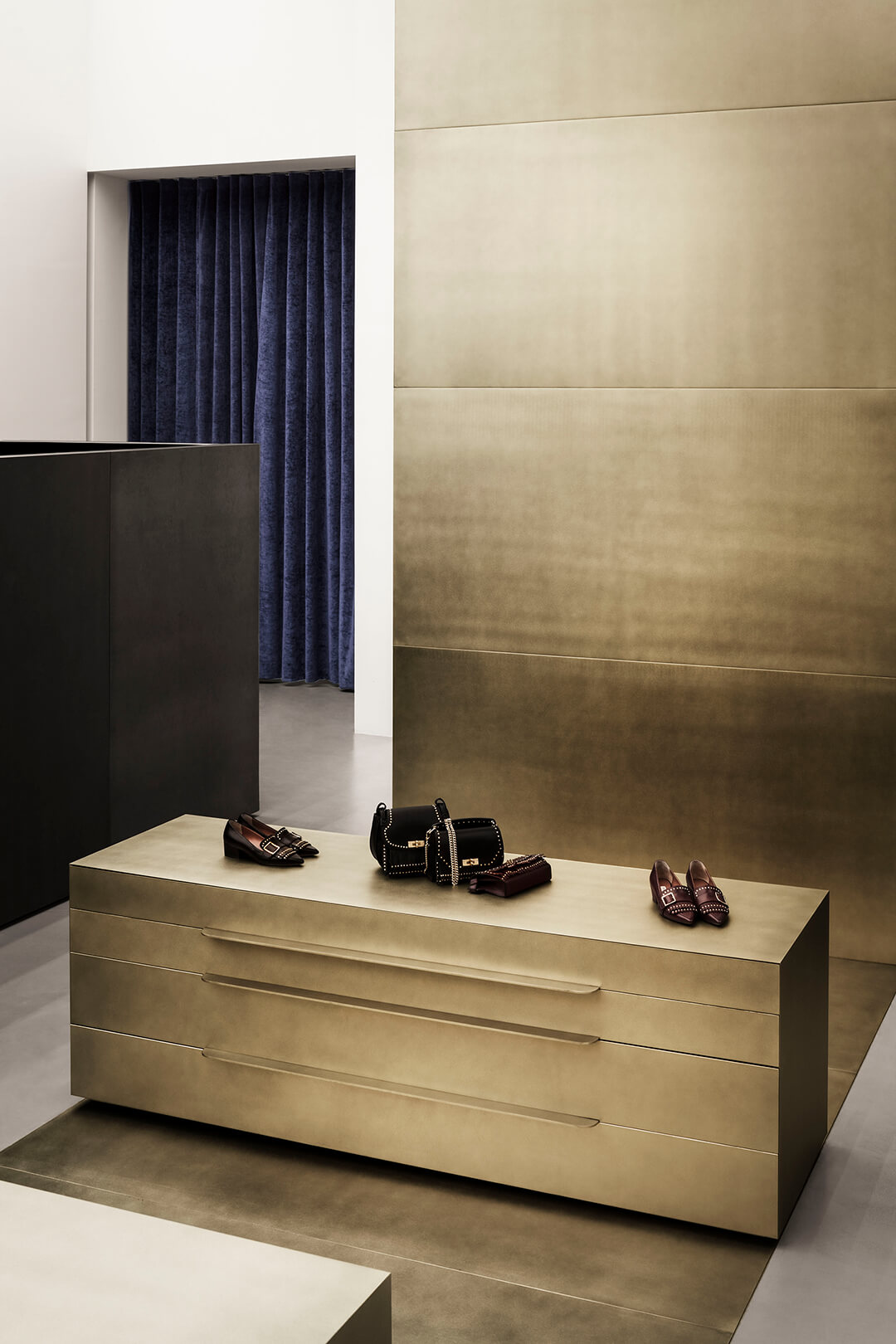 The modular showroom is built in two sections, one graduated for spatial emphasis. The floors – as in the lobby – are grey resin, and the walls in the first section are cast concrete, an ode to Swiss architecture. Throughout, original Jean Prouvé chairs act as another reference point to Bally’s past.

And, strongly in the spirit of set building, each element in the space – from the dark Okumè wooden shelf systems to the black-and-brass custom designed furniture – is moveable. Naturally, rough velvet was the textile of choice for the rugs and curtains, though not in the expected Bordeaux red – rather, light pink and an inky blue.

While the Kursaal Diana Theatre no longer sets the stage for Shakespearean comedies and tragedies, there’s still a standing ovation in order: it’s admirable for a heritage company like Bally to continue playwriting when they could have simply bid adieu to the building’s cultural memory.