2017 was the best year on record for Scotch whisky tourism, with 1.9 million enthusiasts visiting the nation’s distilleries – and even though the final numbers aren’t in yet, the industry expects a 10 per cent increase in 2018. In other words, as consumers are increasingly interested in confirming the sourcing of products and given the fact that process knowledge has become a form of cultural currency – having seen in person how something exquisite is made is the ultimate cocktail-party trump card – there is no better time to hold a guided tour at one of the 40 distilleries in the Scottish Whisky Association.

But with this panorama, how does one stand out in a sea of whisky? London-based designer Florian Dussopt has an answer: you turn the didactic path of blending and smelling and tasting into a memorable interactive activity. 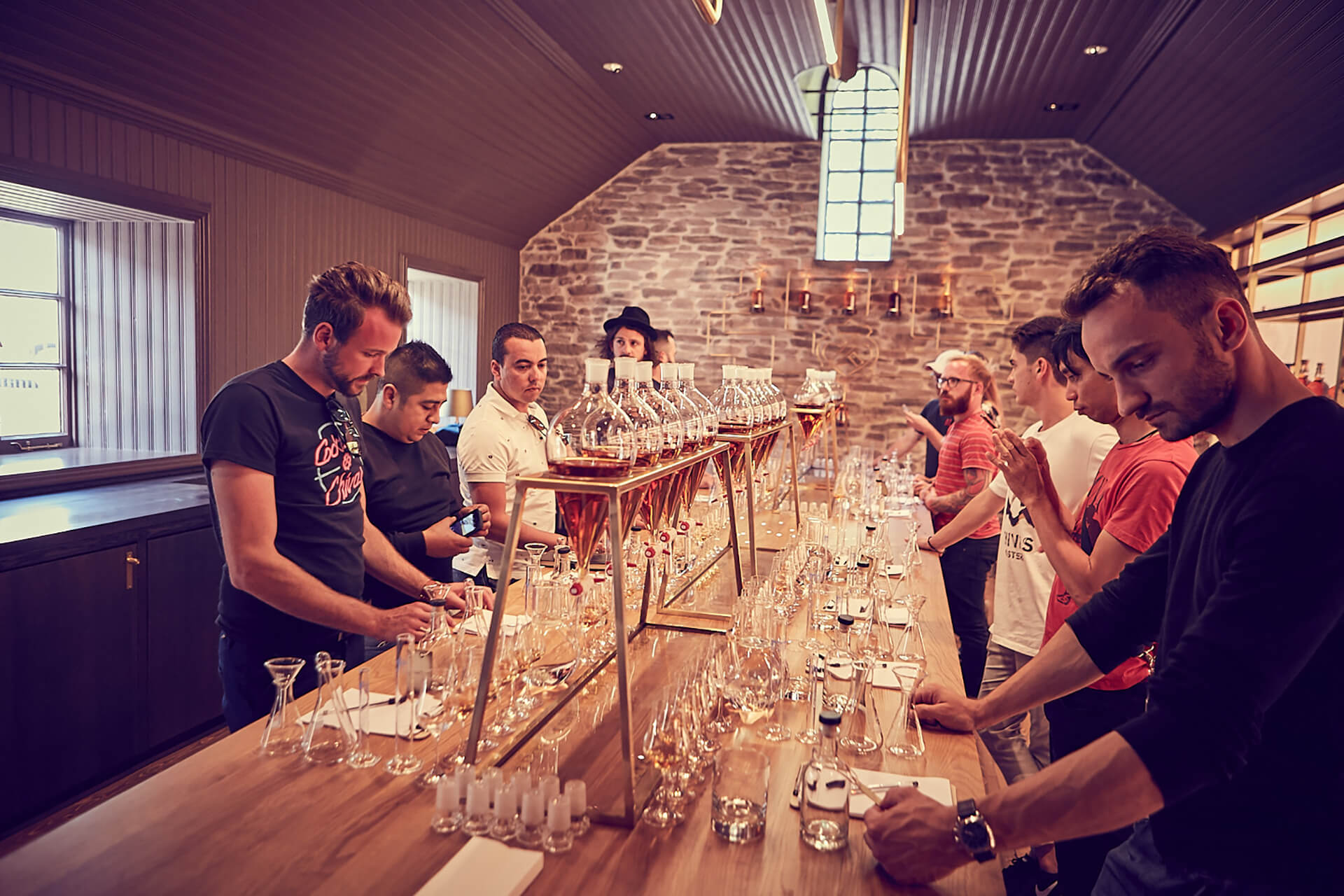 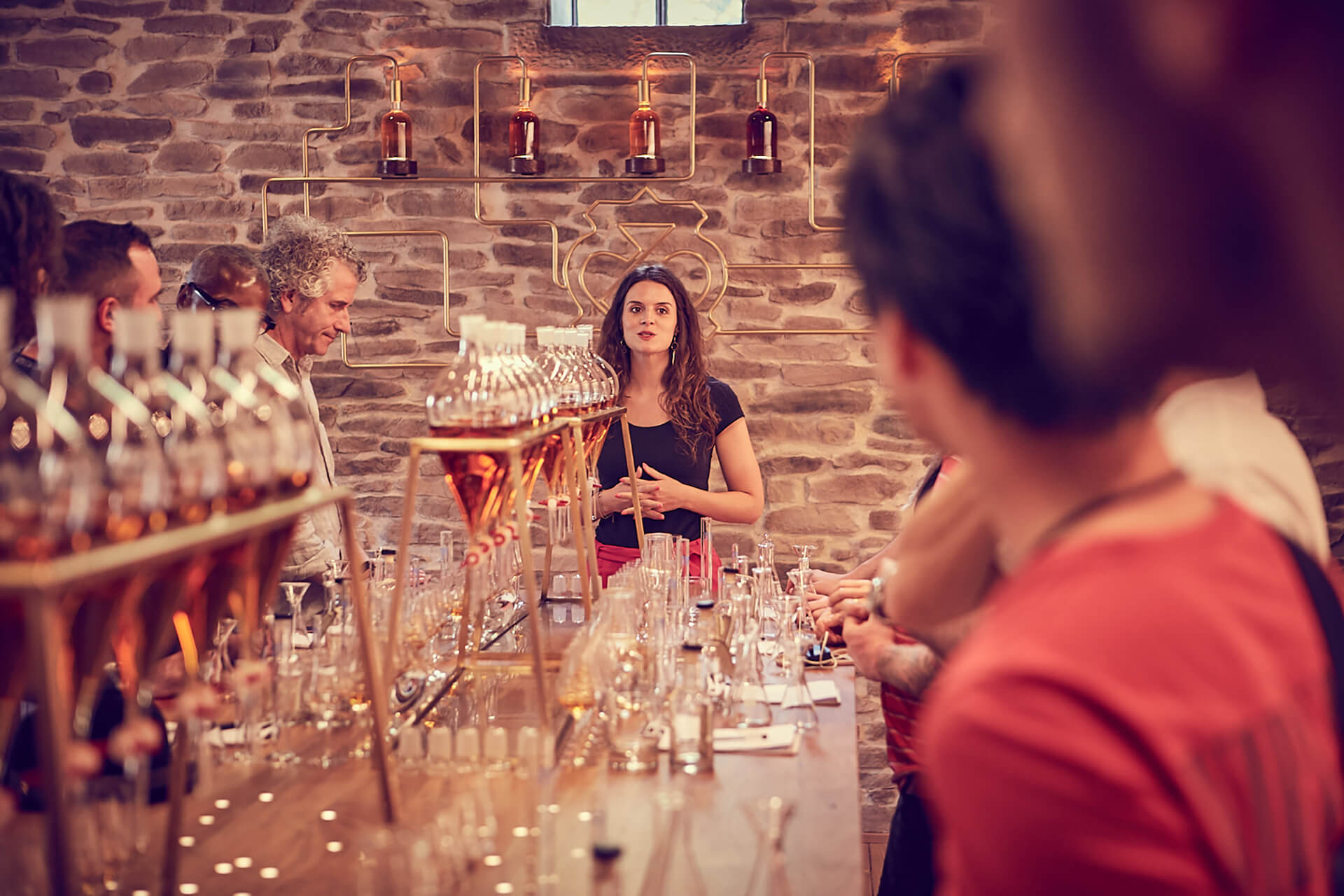 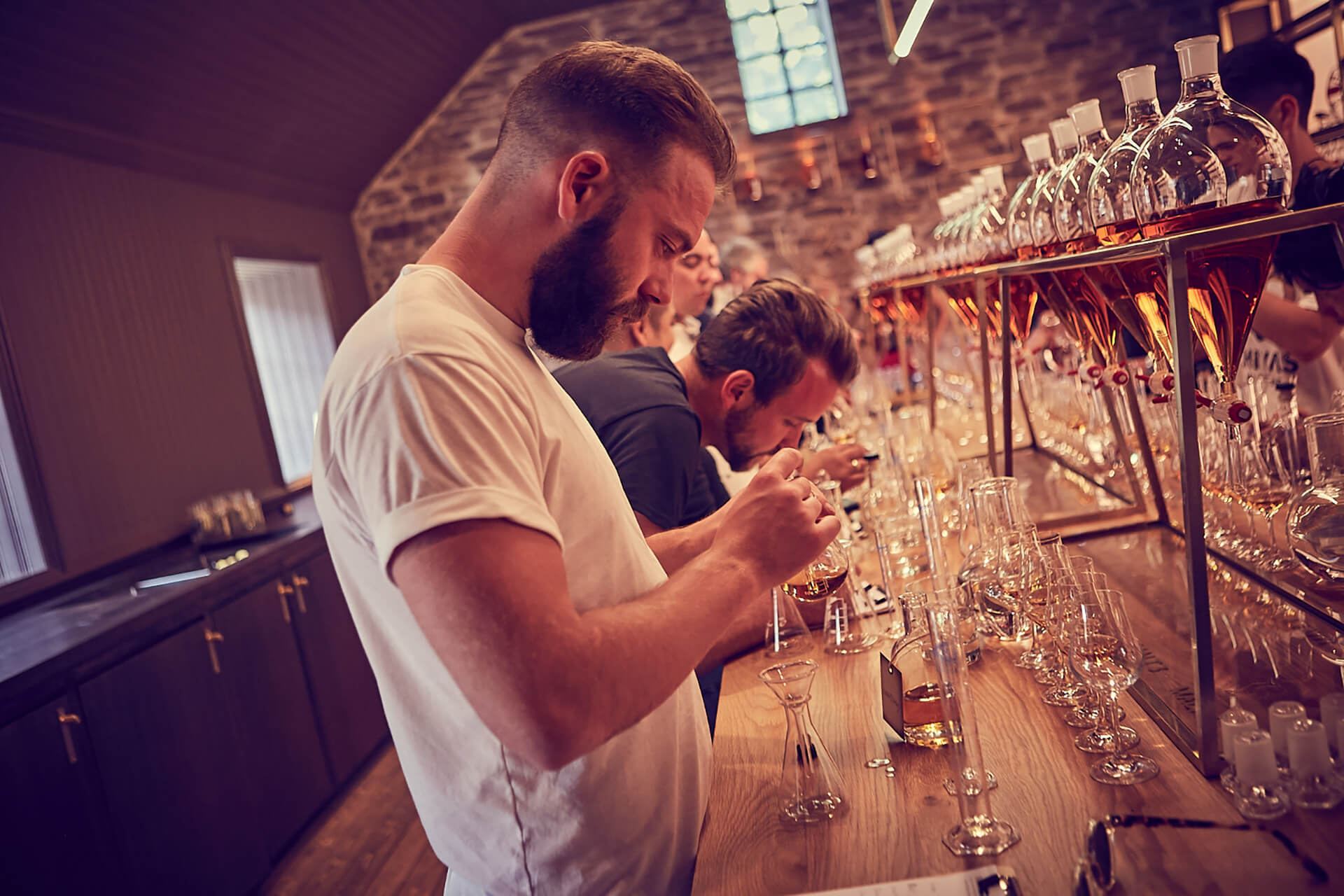 The Blending Room, an experience that ends with a personalized whisky combination and label

That’s what Dussopt and his team at the FDDS creative studio did at the newly refurbished Strathisla Distillery, home of Chivas Regal Whisky.
To understand how single-malt whiskies are made, visitors start their journey at the Tasting Room… where a chandelier takes the spotlight. The bespoke piece of art, called The Constellation, is made of separate light bubbles that light up with each keynote experienced by the taster. It then animates itself, linking one flavour to another. ‘It’s similar to being around a bonfire,’ explained Dussopt.

A photogenic room triggers curiosity, but this is something that needs to be lived instead of photographed

In the Blending Room, visitors share a communal table where they learn how to combine malt and grain whiskies using the adequate lab tools; they end up with their own whisky combination, featuring personalized labelling. In other words: it’s a highly photogenic environment that at the same time offers something so deeply intimate that it cannot be Instagrammed, as it engages senses beyond the visual and the auditory. Strathisla by way of FDDS is now a card-carrying member of the you-had-to-be-there experiential retail trend. ‘Yes, a photogenic room triggers curiosity, but the guidance and the tasting and the pride of making your own blended whisky is something that needs to be lived instead of photographed,’ stated the designer. ‘Ensuring that there is a strong, real content and storytelling behind the photo makes for long-lasting memories.’ 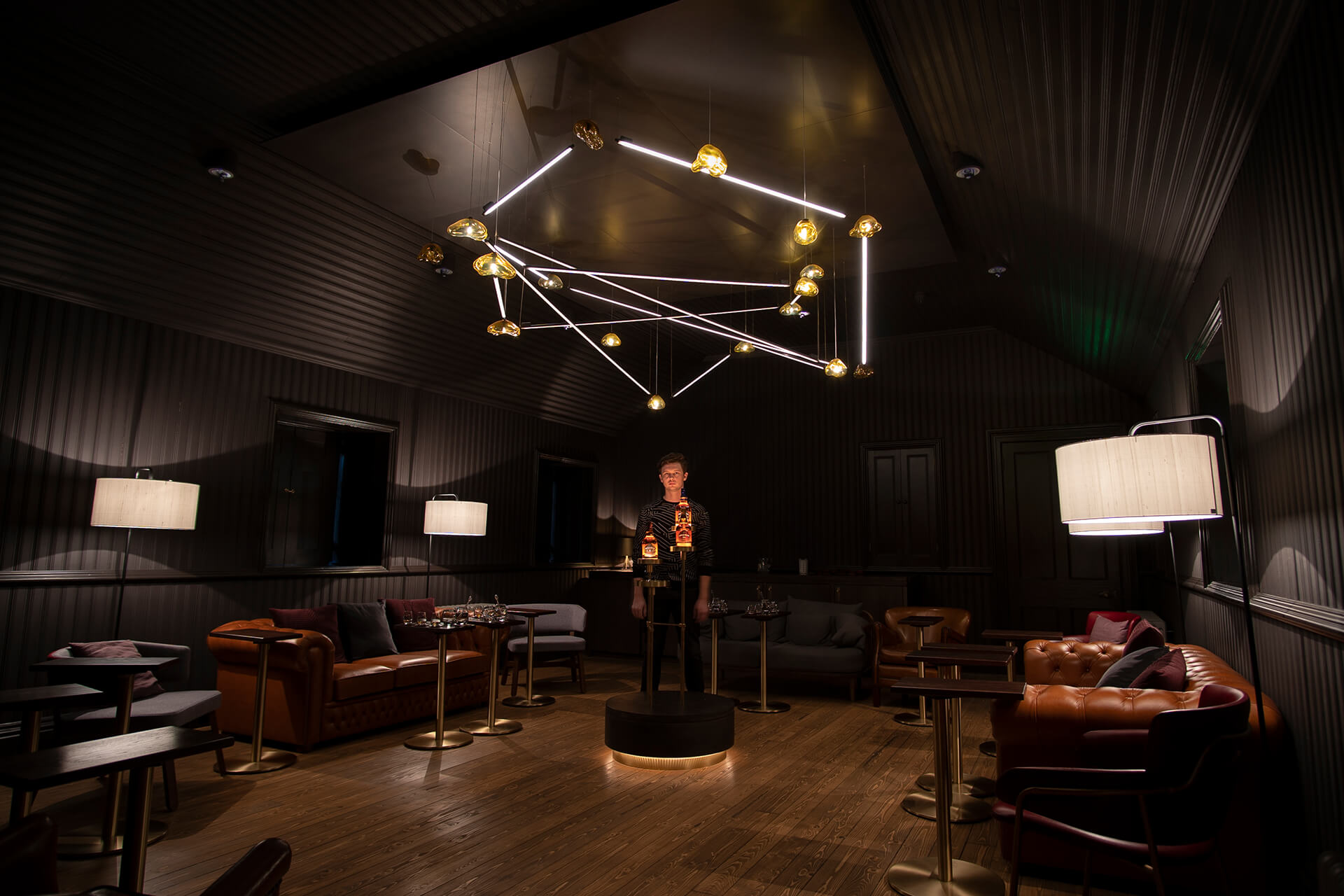 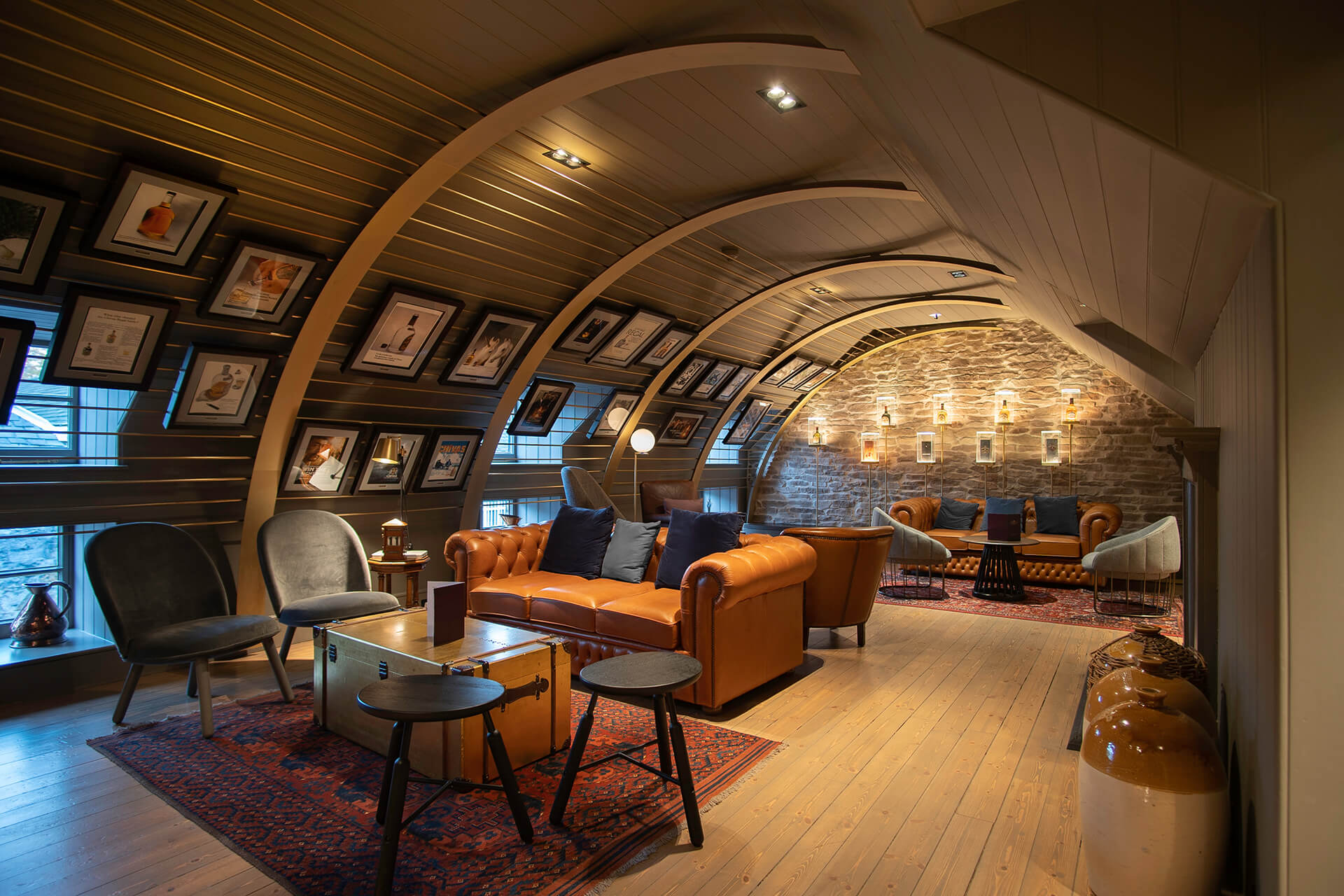 Above, The Constellation at work inside the Tasting Room; below, the Lounge

And then there’s the Lounge, where visitors can relax around a whisky dram, surrounded by a collection of historical bottles – founded in 1786, Strathisla is the longest-running distillery in the country, although the Chivas Regal brand is now owned by Pernod Ricard.

The new Blending Experience takes two hours in total, and due to its high level of detail and immersion, in the past few months Strathisla has been consistently rated by visitors as the favourite distillery in the region. As expected, the tour’s popularity has increased. The average spend per visit in Scottish distilleries – €39 – is currently lower than in its American and Irish counterparts – €44 and €70, respectively – but this is precisely the type of design investment that could change that. After all, when the product already has a positive reputation, spatial storytelling is one of the most effective ways of making it even better.