Bangkok is flourishing. SeARCH Office designed two new addditions to the Nai Lert Heritage Home with one of them housing a reception hall and gift shop that lets the existing trees define its architecture. The other houses a restaurant opening up to the park. Quirky and playful, it portrays exactly the light touch current Thai architecture seems to diverge towards.

The Thai developer Lursakdi Sampatisiri, at the root of the Nai Lert group, was known for innovating the Thai transport and real estate industry in the first half of the 20th century. He was also celebrated for his love of nature and philanthropy. The new project is within the park that housed both the Nai Lert family home and the Swissotel Nai Lert Park, which the family built in 1984 and has recently been sold to be converted into a hospital. 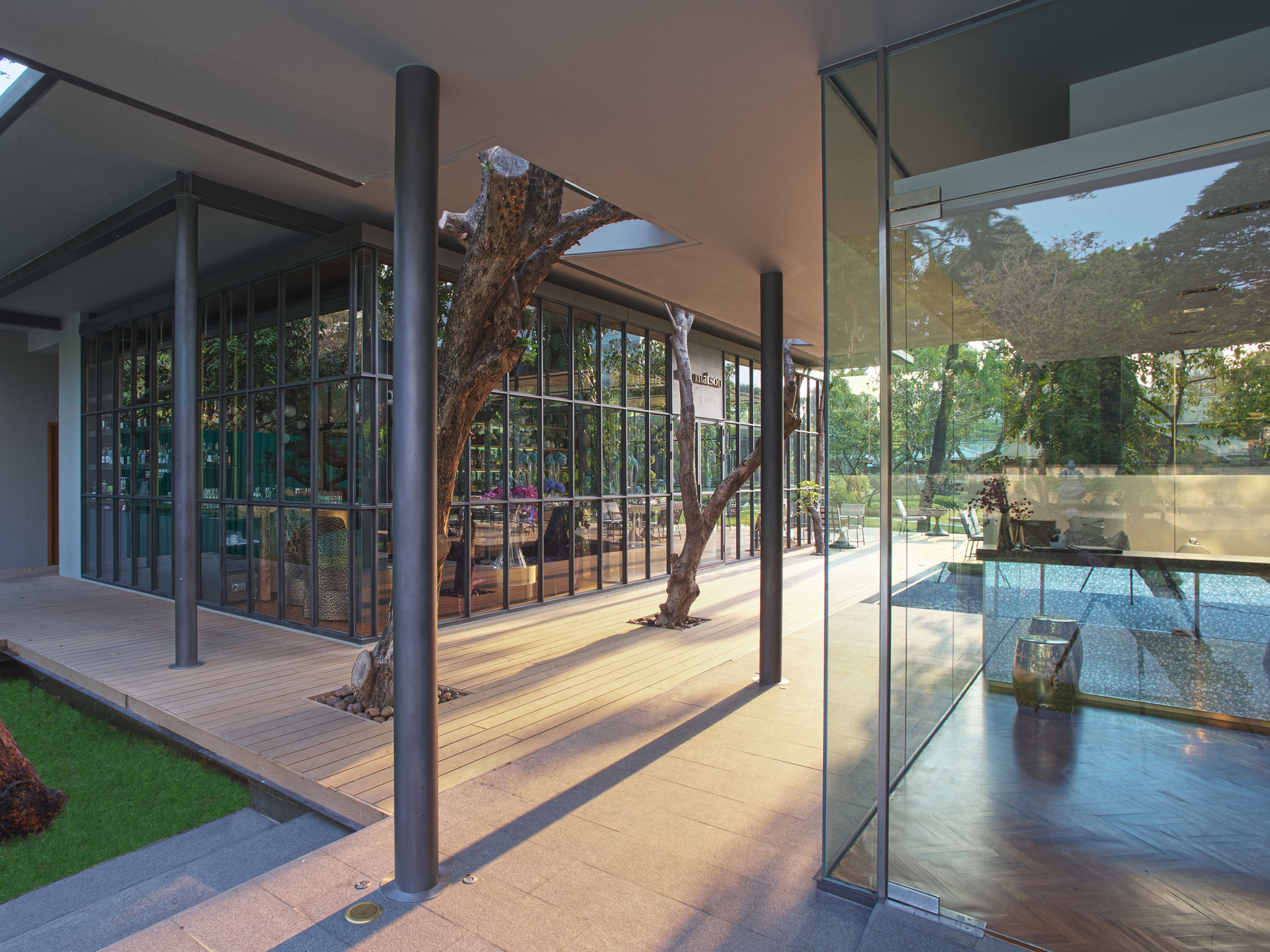 The first pavilion visitors encounter at the park – the reception hall and gift shop - consists of thin horizontal planes, as if SANAA and the Farnsworth House had a beautiful bouncing baby. Two glazed rooms are sandwiched between concrete slabs, one rectangular and the other free-form. The slabs have circular openings to allow the growth of the trees, inviting it to be an active participant in the space. As the vegetation branches out, so do the cut-outs, creating several oddly placed and sized openings. The projects sit atop slightly elevated platforms, giving visitors the impression that it only grazes the landscape lightly. 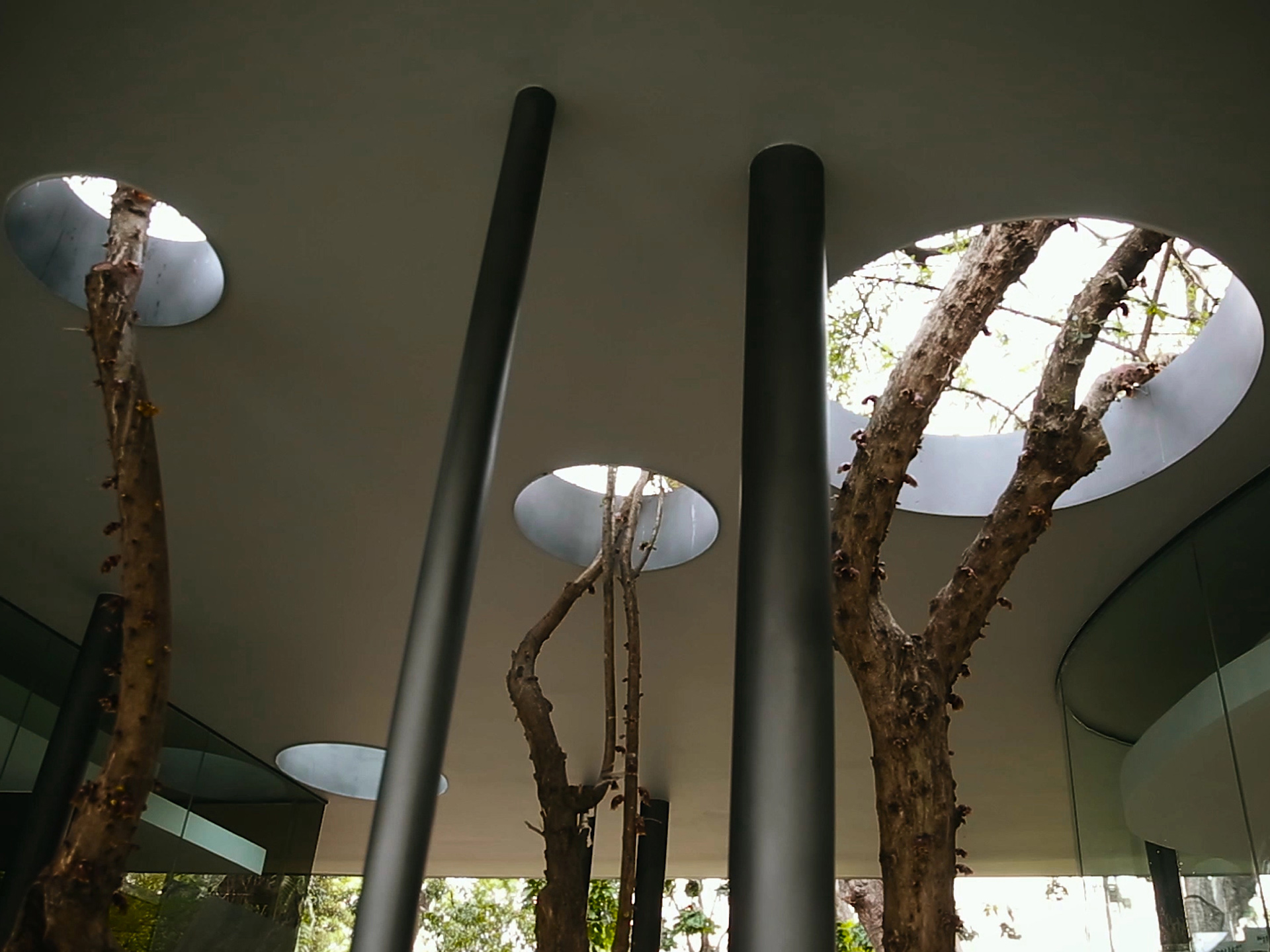 The other pavilion, hosting a high-end restaurant, is more traditional in its architecture with its fully-glazed facades and roof structure that extends past the glass box shading the extensive patios surrounding it. Even here, the roof accommodates the greenery, designed with an outline that leaves the trees untouched. Wooden decks connect the different buildings contouring the park and leave ample space between the built areas. 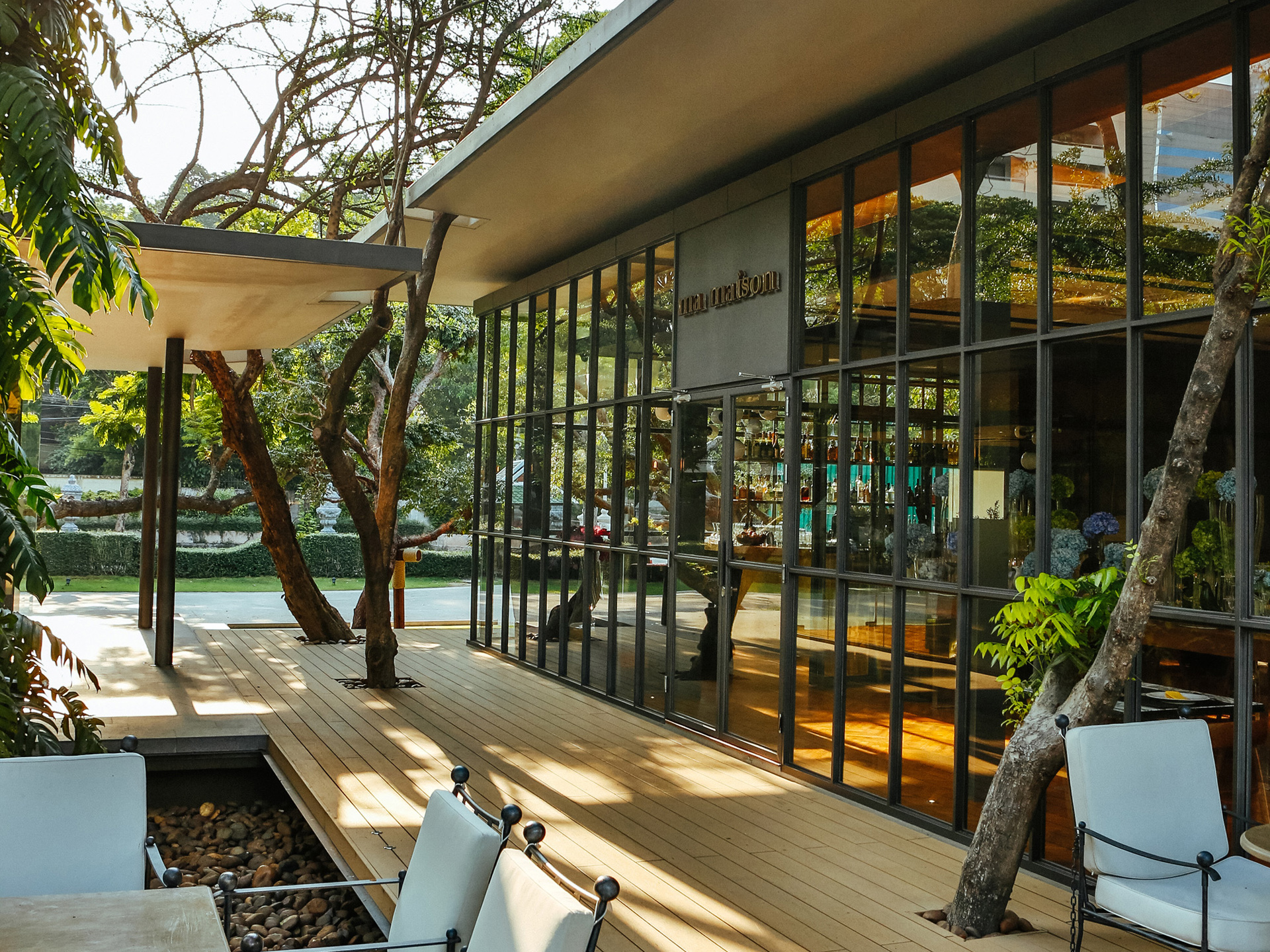 Although the architecture is light and barely touches the ground, the project is visually enriched by integrating and accepting its context. 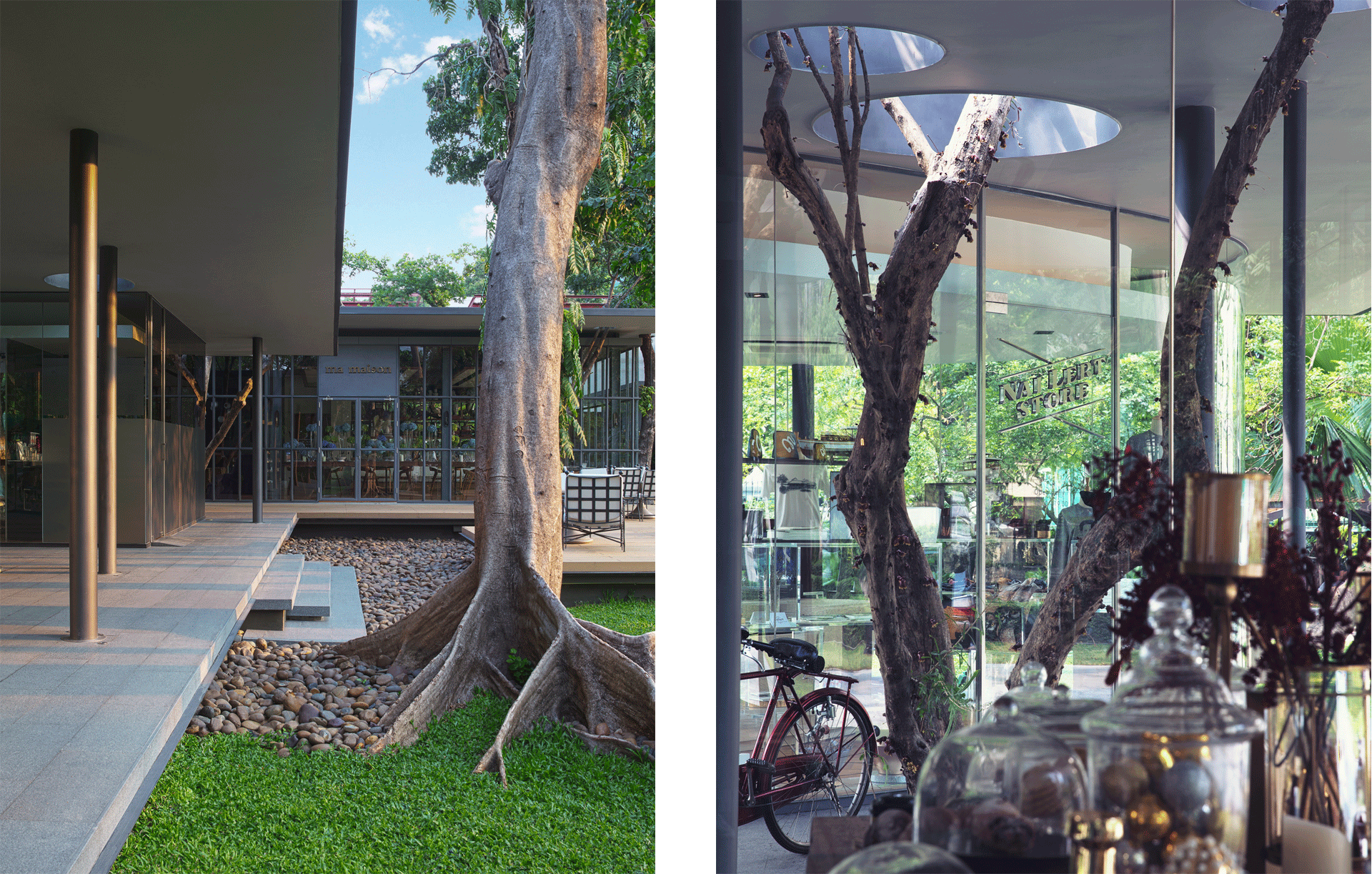 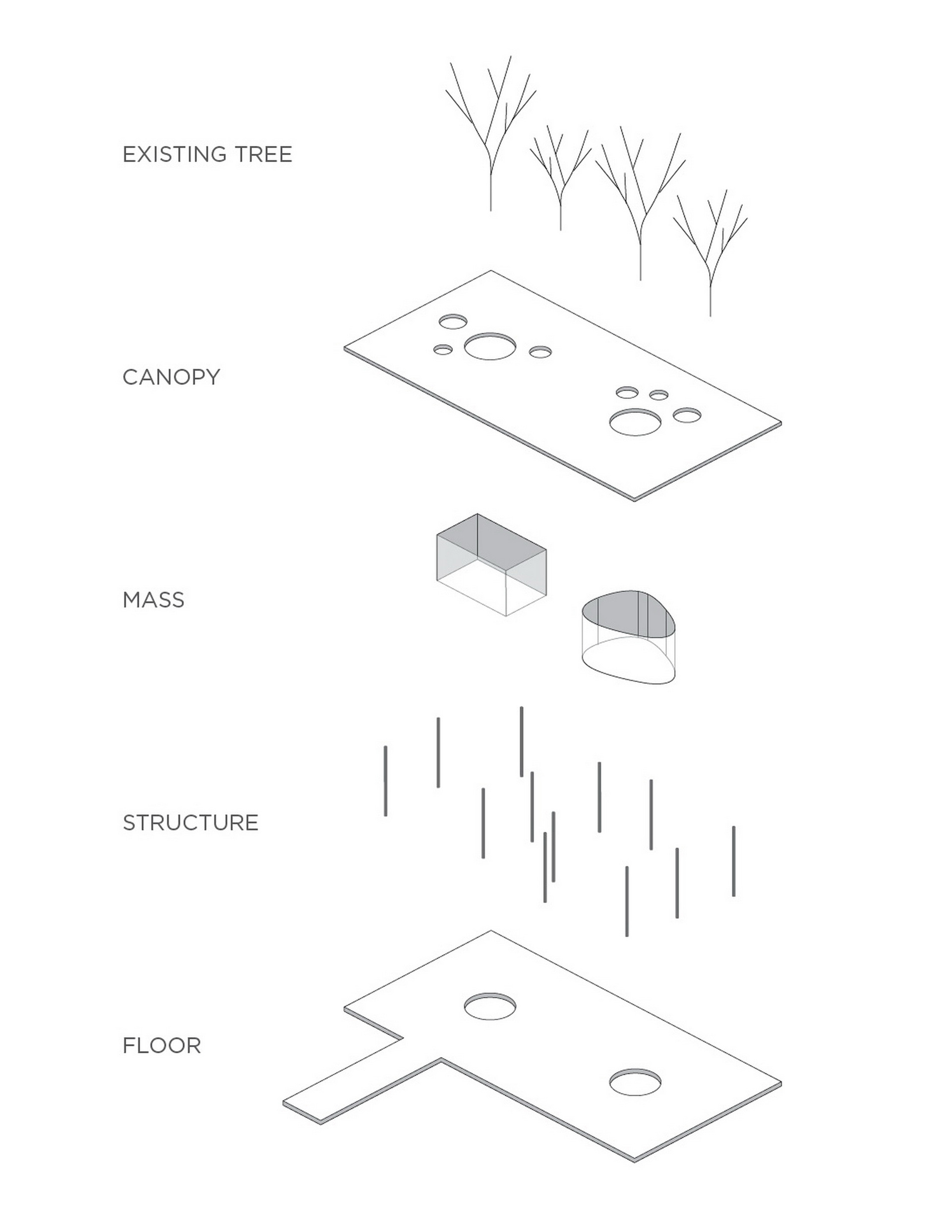