Isabel Gibson and Helen Chesner studied graphic design communication, not spatial or product design, but it’s their quirky and playful installations that have made a splash and shaped the current direction of their eponymous London-based practice Isabel + Helen. After each graduating from Chelsea College of Art with a degree that promises to ‘engage you in the creation and understanding of the rich visual culture that now surrounds us’, they promptly nabbed a project for an institution that – coincidentally? – surrounds us in rich visual culture: London’s V&A. There, the duo developed an interactive installation inspired by the Russian Constructivist design movement: ‘We didn’t want to do a flat piece of work on a wall,’ says Chesner. ‘Even though we hadn’t done much 3D work by that point, it felt like the natural way to go.’ And over the course of the last seven or so years, that performative project has naturally led to the next one – and the one after that.

How would you describe your shared design philosophy?

HELEN CHESNER: It’s hard to boil down, but we combine a playful approach with a direct, graphic aesthetic, often using kinetic elements to create a performance for the viewer.

ISABEL GIBSON: Every project is so different in terms of scale and typology, even though we approach them in the same way.

HC: And we’re responding to a brief each time, of course. Some projects really reflect our ethos and what we’re about, whereas others focus on the rich visuals of a brand. It’s all about marrying those two sides together, which means we naturally end up with different outcomes. 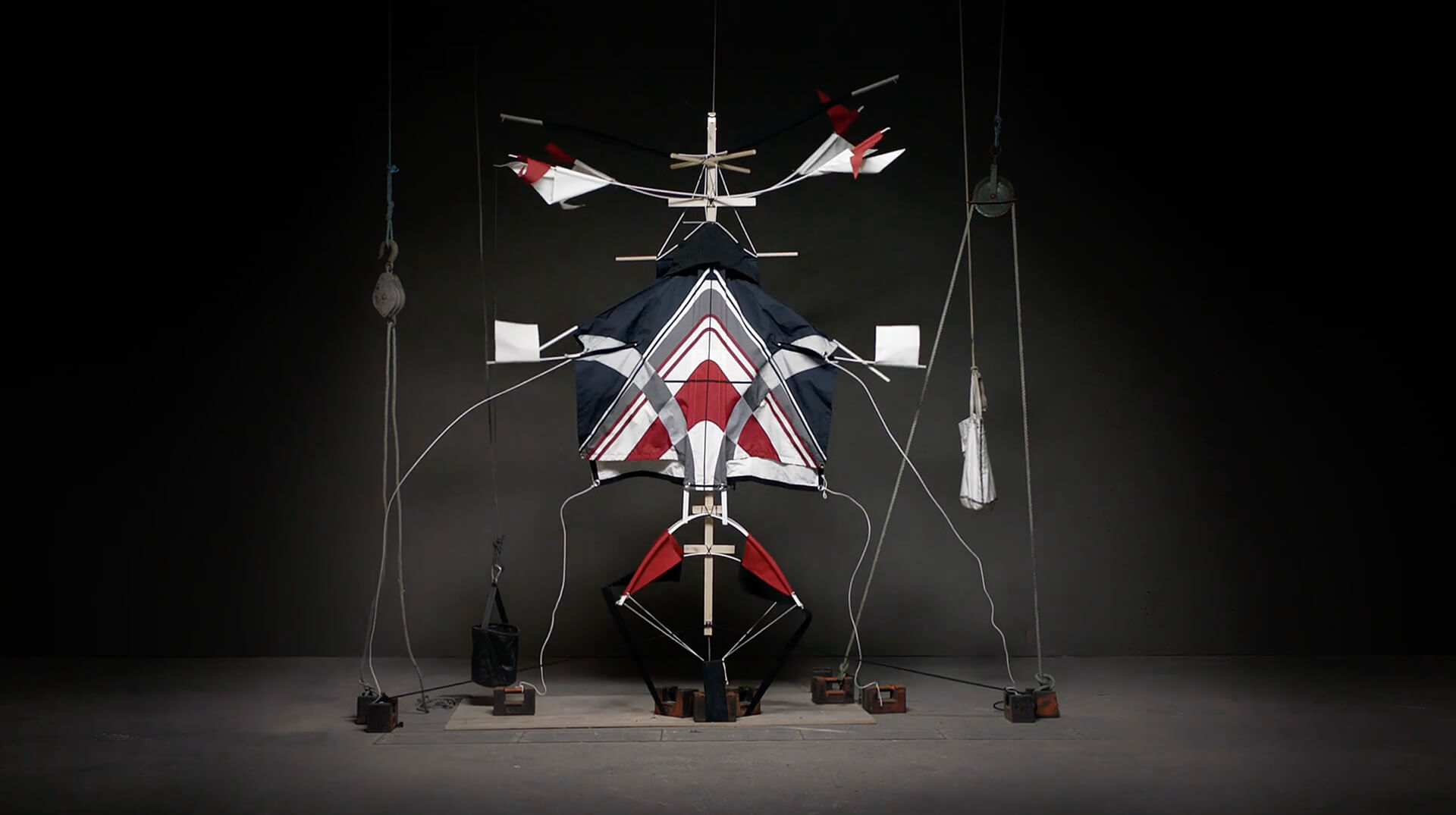 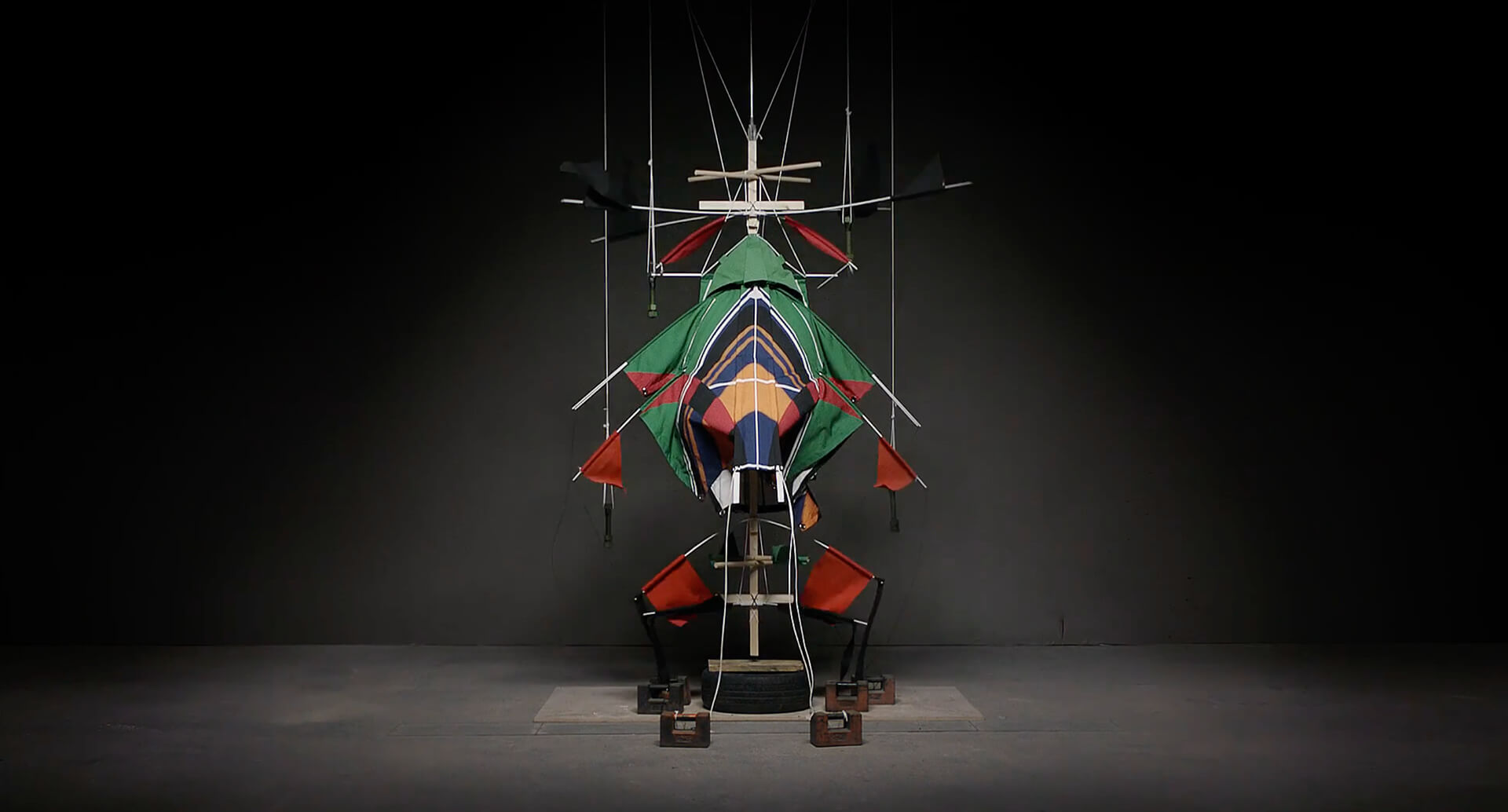 The V&A project was clearly a breakthrough moment. Have there been others?

IG: More recently we did a project for Moncler: two kinetic pumping towers for the Craig Green AW18 Genius collection at Milan Fashion Week. We were inspired by the exaggerated forms of the designer’s puffer jackets, and spent months developing the towers at a 1:4 scale in the studio. It was overwhelming to finally see them standing eight metres tall in Milan, moving exactly how we wanted them to – we didn’t realize quite how impactful they’d be. Their motion was both eerie and somehow human. It was another moment that made us understand how movement can deeply affect an audience.

You designed some recent shop windows for Hermès. How did you approach these projects?

HC: We met the client a few years ago. They’d seen the V&A project, among others, and liked our work. Hermès has an annual theme, which at that point [SS18] was play. It’s such a great brand to work for. The team is really open and lets you run with your ideas.

IG: They’re all about storytelling and narrative; so are we. For these windows, our narrative was mischievous machines. We created humorous scenarios in each window, where machines and white goods played directly with Hermès products. It felt a bit like Toy Story – like the appliances had come to life because they thought no one was watching. The products became part of that story rather than accessories to it. The collaboration led to more Hermès windows in 2019, and we have another series coming up this year.

Do you feel that shop windows should always tell a story?

IG: Shop windows are often part of a series, which can really hit the narrative home. When each window in the series communicates with the others, passers-by get taken on a journey, having to see them all to complete the story. It’s an approach we also took a few years ago for a series of Christmas windows for Selfridges under the theme of outer space.

HC: Hermès also had different stuff going on in other stores across London, but they managed to connect the content together. That way, shop windows can become a citywide public art gallery. 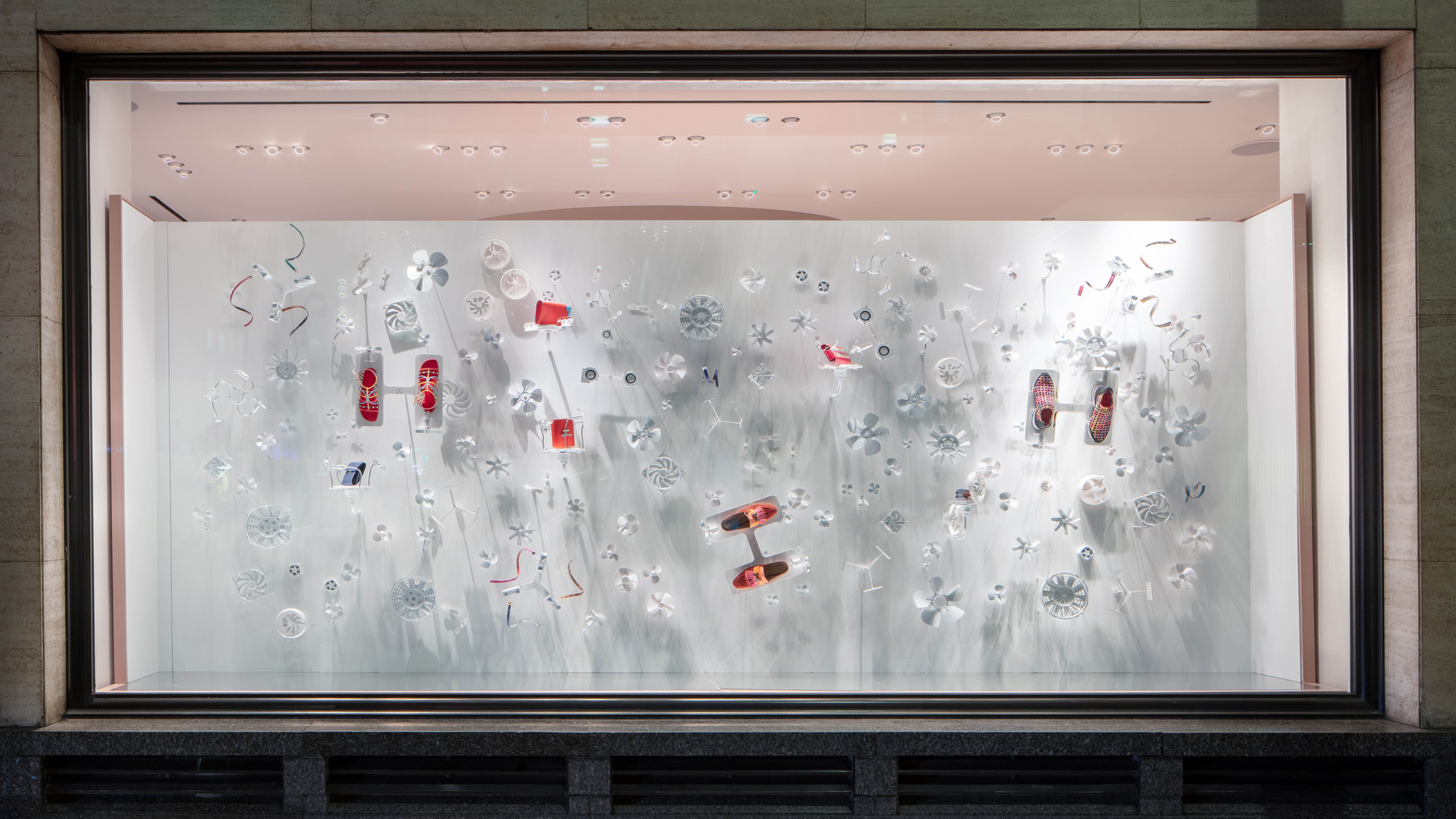 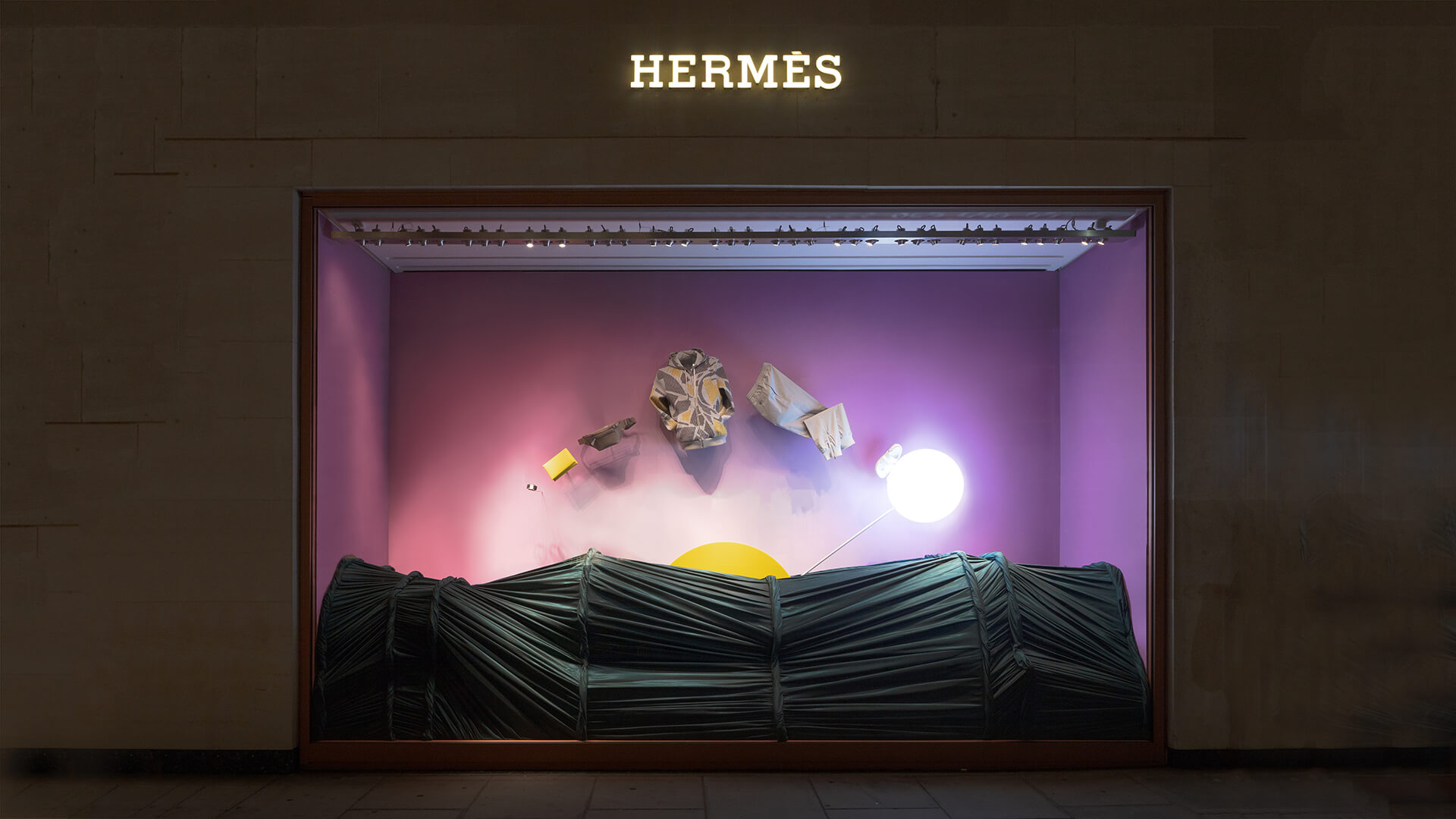 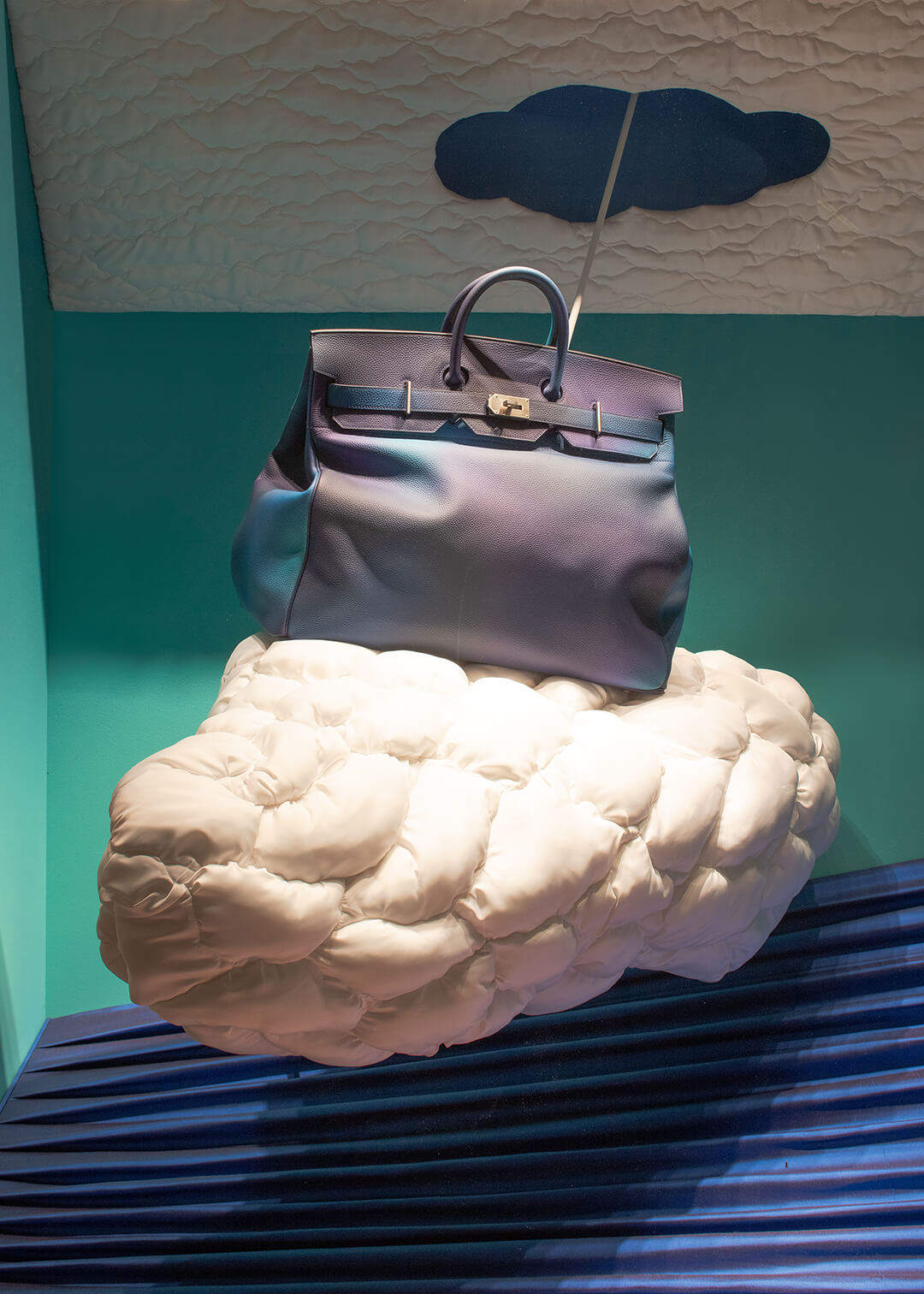 Is the role of shop windows changing?

IG: They’re becoming less about showing products and more about drawing people in. Less about visual merchandising and more about capturing a brand’s ethos. Like the Hermès example, they can function as an art gallery of sorts – people might visit a store just to see the windows. There’s more theatre, more spectacle.

HC: We’re living in a digital world and are used to seeing high-resolution images on screens. This has led to a counteraction: a more physical, analogue approach. It’s refreshing.

If you understand what you’re about, brands will understand, too

Do you feel young designers need to specialize or diversify?

HC: There’s merit in both.

IG: The brands we work with have so many different outputs: windows, online content, campaign imagery. It’s nice to work with them across these channels – that’s what we’re beginning to do for Hermès.

IG: At the end of the day, brands come to you for your aesthetic. If you can communicate that, it won’t matter what channel it’s for.

This is a condensed version of an interview featured in Frame 132. In that issue, you can read more about how Instagram enriches Isabel + Helen's output and why the designers are experimenting with film. Get your copy here.