For the newly presented The Institute of Isolation project, Lucy McRae dedicated six months to designing a physical space which optimises human adaptability for unnatural experiences such as space solitude. We caught up with the body architect as the film made its debut at the London Science Museum:

The Institute of Isolation is connected with humans in space and adaptability in particular, a topic you mentioned way back in our interview featured in Frame 100. For your latest project, could you tell us more about space as the ultimate isolation place?
LUCY MCRAE: I think space is the ultimate challenge because we know so little about living permanently there. Given the way the body has been designed and evolved, we are not ready to live permanently in space. So if you think about space as a kind of atmosphere, it is a vacuum and is extremely isolated compared to what we know as human kind. I haven’t thought about it as the ultimate form of isolation but because we know it is so isolated, how do we prepare ourselves for the isolation while on Earth?

As a self-proclaimed body architect, you are probing the frontiers of human adaptability. Is this project concerned with mental training and adaptability for isolation in space?
For me, there is no separation between mind, body, brain and consciousness, so I am looking at optimisation of the self – or augmentation of the self – through very different techniques of isolation. I am embarking on a quest to understand the consequences of genetic engineering on human health and the body, and how we can use that as a way of steering experiences in order to augment the self beyond genetic engineering. 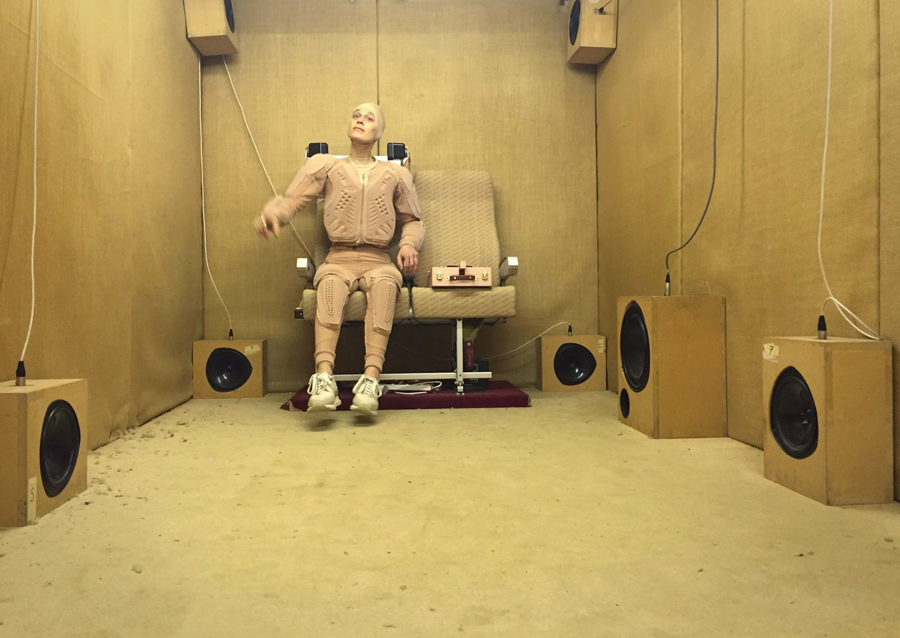 Can you walk us through The Institute of Isolation?
The Institute of Isolation is composed of various chambers that fit within one building, a hybrid between observation, documentary and a fictional organisation. The institute is located at the Le Fabrika in Barcelona, where everything seemingly happens within that extraordinary space. The campus contains chambers of which one is an anechoic chamber, a room designed to absorb sound and situate a person within the sound of silence. For someone who has not experienced that before, the brain begins to mimic and map previous experiences in order to adapt. The sensation is quite bizarre. I used each location as a visual symbol to understand isolation in space.

If you think about the anechoic chamber, and the brain's automatic response to map previous experiences in order to adapt, would the same happen when settling on Mars; mapping previous experiences from Earth to adjust to completely unknown territory? I am really interested in being able to augment and optimise the body and get the best out of it. So could the design of anechoic chambers for the home be an extension of the home which begins to blur domestic boundaries by training the body and mind?

Moving on to the next chamber, the microgravity trainer, is a prop built for the film which takes inspiration from early NASA training techniques where they would monitor biometric data and explore the body while simulating microgravity. This machine functions as weightless ergonomic device blurring familiar notions like exercise patterns, sleep cycles and sexual routines into one and imagining how we might condition our self in the future. This conversation needs to become a public debate as human driven evolution is becoming ever more rapid. 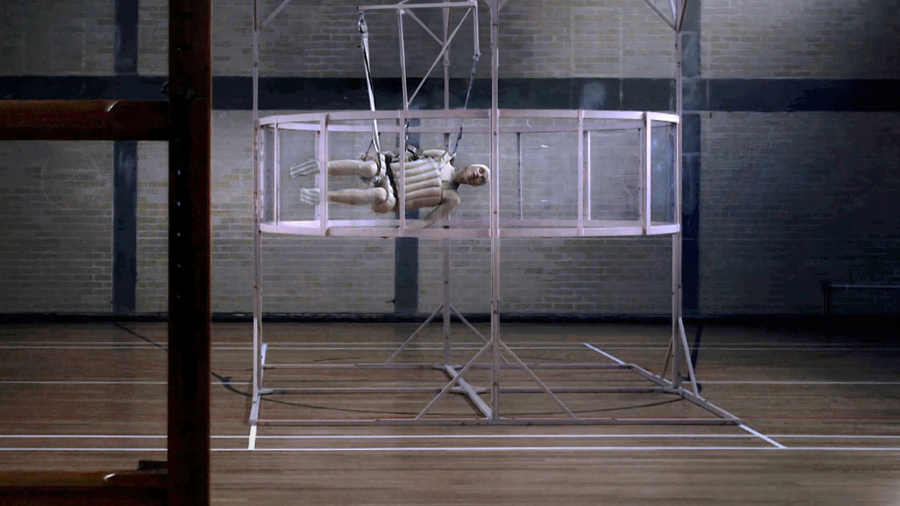 Is the framework intended to be a commercial product?
Yes, I have always been really fascinated with a label and having a product. With my films, I like to be able to extend the film beyond the screen and actually create physical manifestations. The way I approach my work is about initiating conversations around scientific breakthroughs with the public and the consequences these breakthroughs will have on human health and body. 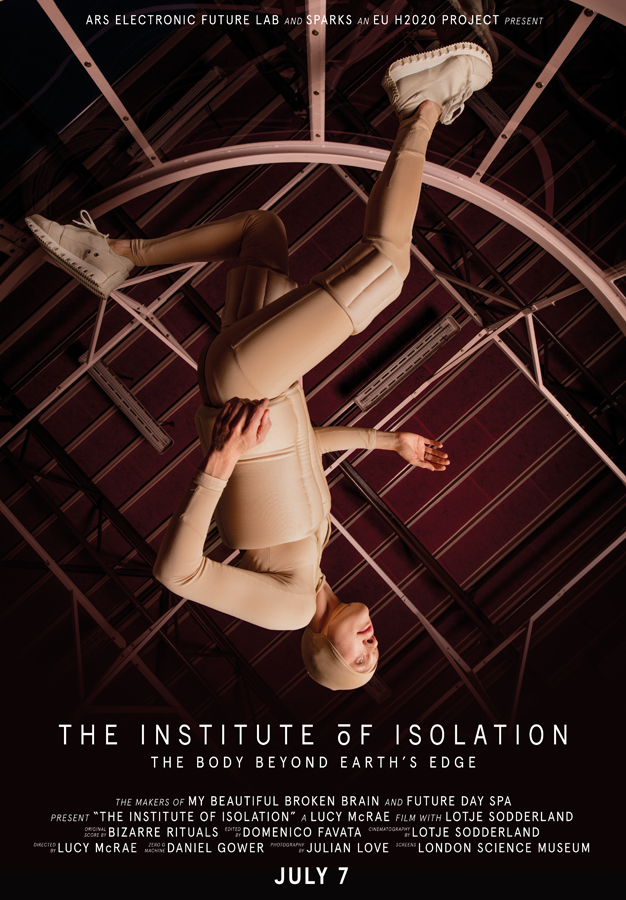 Is the project meant to create awareness?
Yes. It is not about making hard conclusions or results but to inspire questions.

Is space travel still on your bucket list?
The desire is still there, thus I channel that directly into my work. 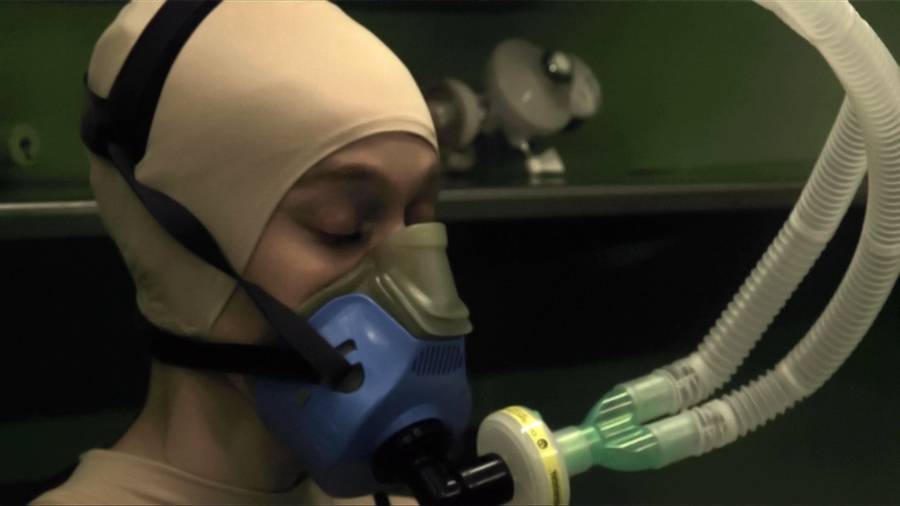 Do you think that humans in general, should be training to go to space?
I think we are likely to continue having these conversations for generations to come, until it becomes the norm. You can't make someone go to the gym if they don't want to. It’s a human desire. I would like to create imagination and possibility but not push people to it.

Do you see how your interests and work evolves? How perhaps, each project leads to the next question, solution, goal?
I intentionally wanted to depart from previous film aesthetics in general and challenge myself to create something that is really quite visually different to what I have done before. I think part of that departure was a conversation that I had with Lotje Sodderland, director of My Beautiful Broken Brain, a film that she did with David Lynch. We were having a conversation on storytelling and decided to collaborate on this project where I would come from a fictional point of view and she would come from an observational. So we would create a documentary that merges and meets in the middle for both two approaches. In terms of process from my previous projects, I collaborated with scientific experts and professors, so I think that the importance of having conversations with experts in that field is always the foundation of how I work. Quite often the previous projects are never finalized or resolved. There is no beginning and no end on what has been started or what is coming.

Could you give a glimpse to what could evolve from this particular project?
I am definitely interested in developing products that follow this line of thinking, they are more tangible than just film. The Institute of Isolation film is not available online, screened only at the museum which is part of getting people to experience the gallery and not just stay in their comfort zone by staying at home with everything so readily available.

The Institute of Isolation is part of the Beyond the Lab exhibition on show until 15 September 2016 at the London Science Museum. the film will then travel to 28 EU cities until July 2017.