As COVID-19 lockdowns are being lifted all over the world, hospitality businesses – and more specifically, restaurants – are looking for solutions to open back their doors while still fearing another disastrous outbreak or in-house infection. Around the world, these businesses are trying to come up with new ways of accommodating their customers while bearing in mind the safety of all.

Perhaps the most publicized alternative is the Serres Séparées project – which seats guests in five small green houses – from the vegan restaurant Mediamatic Eten at the Mediamatic Biotoop in Amsterdam. This project is reminiscent of the glass-domed dining spaces and cafés found all over London in 2019: the CoppaClub’s Tower Bridge, Aviary, Jimmy Garcia’s The Lodge, Fulham Beach Club’s Winterland and the Skylight Rooftop are just a few. Another widely shared solution is Plex’eat, proposed by Christophe Gernigon. Transparent acrylic hoods hang from the ceiling, placed over every seat to protect people while enabling them to enjoy a fine-dining experience.

In the US restaurants are placing dummies to fill up unused tables, creating social distance between occupied ones. The dummies are there to fill in the blanks and make the restaurant feel busy, or lessen the awkwardness of dining in an almost-empty room. The Inn at Little Washington in Virginia – a three-star Michelin restaurant – dresses its dummies in 1940s-era style, to fit in with the interior decoration.

However, these alternatives are mostly pop-ups or temporary solutions that have yet to prove their efficiency and attractiveness over a long period of time.

The Japanese government declared the state of emergency in seven of the most populous prefectures on 7 April 2020 – expanded 10 days later to include the whole country. Following this declaration, most restaurants closed their doors, something that the country had never seen before. Nevertheless a few days after the state of emergency was declared to be over, the spatial design of existing restaurants allowed them to reopen much sooner than peers overseas – without the need to rethink their functioning, except for a few extra serving formalities and precautions.

The key is in the layout of the restaurants and Izakayas: most commonly, the Japanese-style taverns are an aggregation of smaller spaces rather than larger open-space dining areas. Each space in the Japanese restaurants have a specific function for a specific group of people, to enhance the dining experience and accommodate the customers in the most suitable way according to their needs.

The small spaces differ largely from restaurant to another. Regardless they can be classified into several categories or types that fit within a few generic specifications. Following is a trial to illustrate some of the most commonly used types, through recent works of Matsuya Art Works / KTX archiLAB, a design office specialized in commercial spaces with more than four decades of experience in restaurant and hospitality projects.

These are private rooms that accommodate small groups of approximately two to six people. In several cases, the rooms can be combined to fit a few more people. The cell rooms can be separated through walls, Fusuma light panels, Sudare screens, among other elements.

This type of space is completely surrounded by walls and is accessible through a door, usually sliding door, Fusuma, or Shoji Japanese paper doors, as seen in the 2019 Moritomi Restaurant relocation. 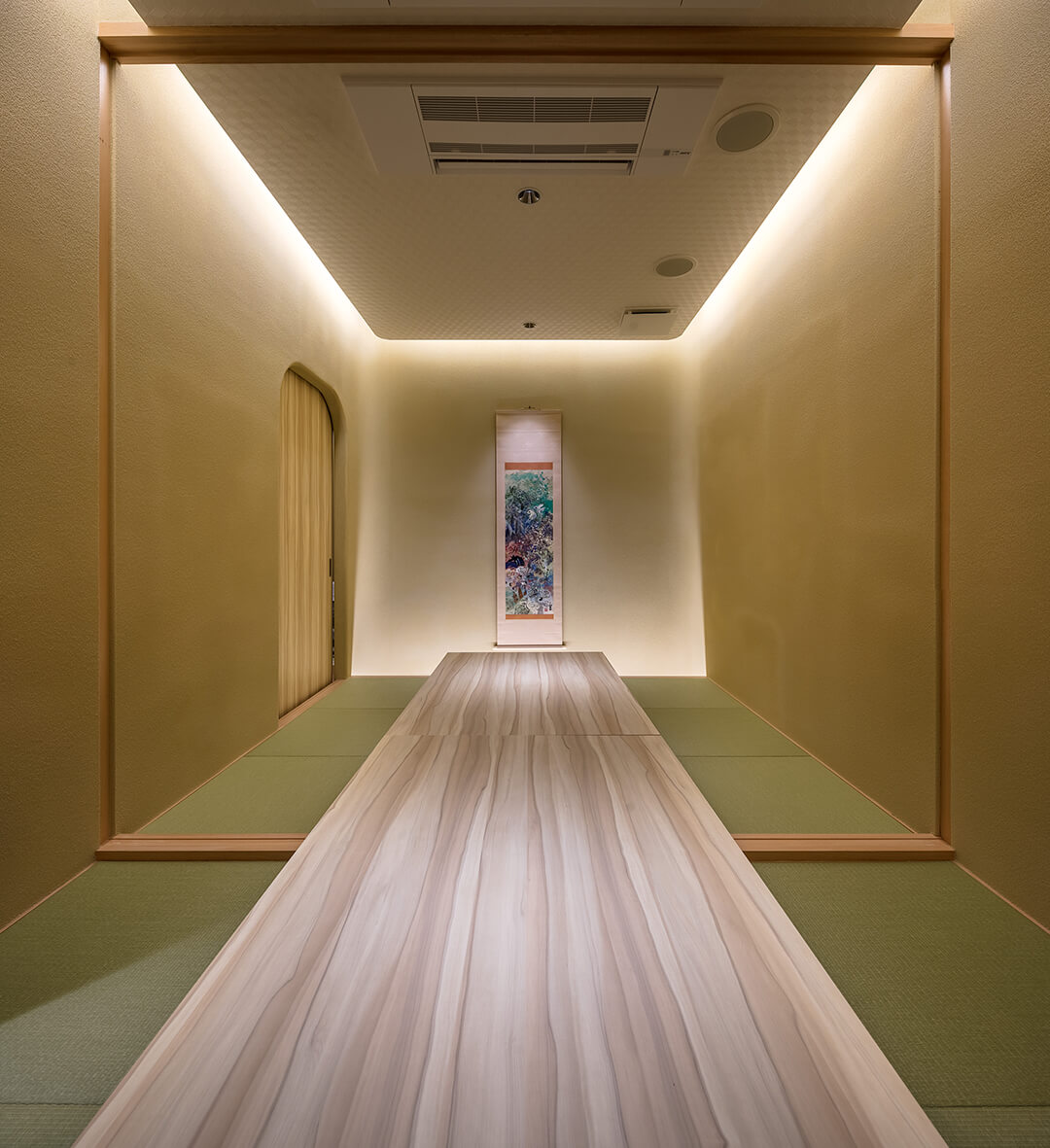 Header: The counter space at Moritomi sits only four people and the available space under ceiling was extremely low. Dark mirrors on both sides were used to visually expand the space. | Above: Two completely closed rooms are separated in the middle using fusuma panels in Moritomi's VIP room. The panels can be easily removed to allow the room to accommodate up to 12 people. Photos: Stirling Elmendorf

The semi-closed spaces are similar to the isolated room, except that they are aligned along a distribution space and are not completely closed. They are, for instance, surrounded by three walls with one open side – with no use of doors to close or open the space.

While the two options above offer a high level of protection, they rely on a rigid spatial layout where each room is designed separately to perform as a self-sufficient dining space. Some restaurants, in contrast, may need a more flexible separation of space, which can be adjusted according to the dining group size and need. The typical separation Japanese restaurants use is a flexible screen called Sudare. Sudare are hung from the ceiling with hooks – they can be rolled or folded up and down, and they can be moved to be placed where needed. The traditional material is usually bamboo or wood, but modern production also offers different material possibilities. Although Sudare do not prevent the virus’ spread, the material can be substituted for a more performant one – transparent plastic, for example – while keeping the same concept. 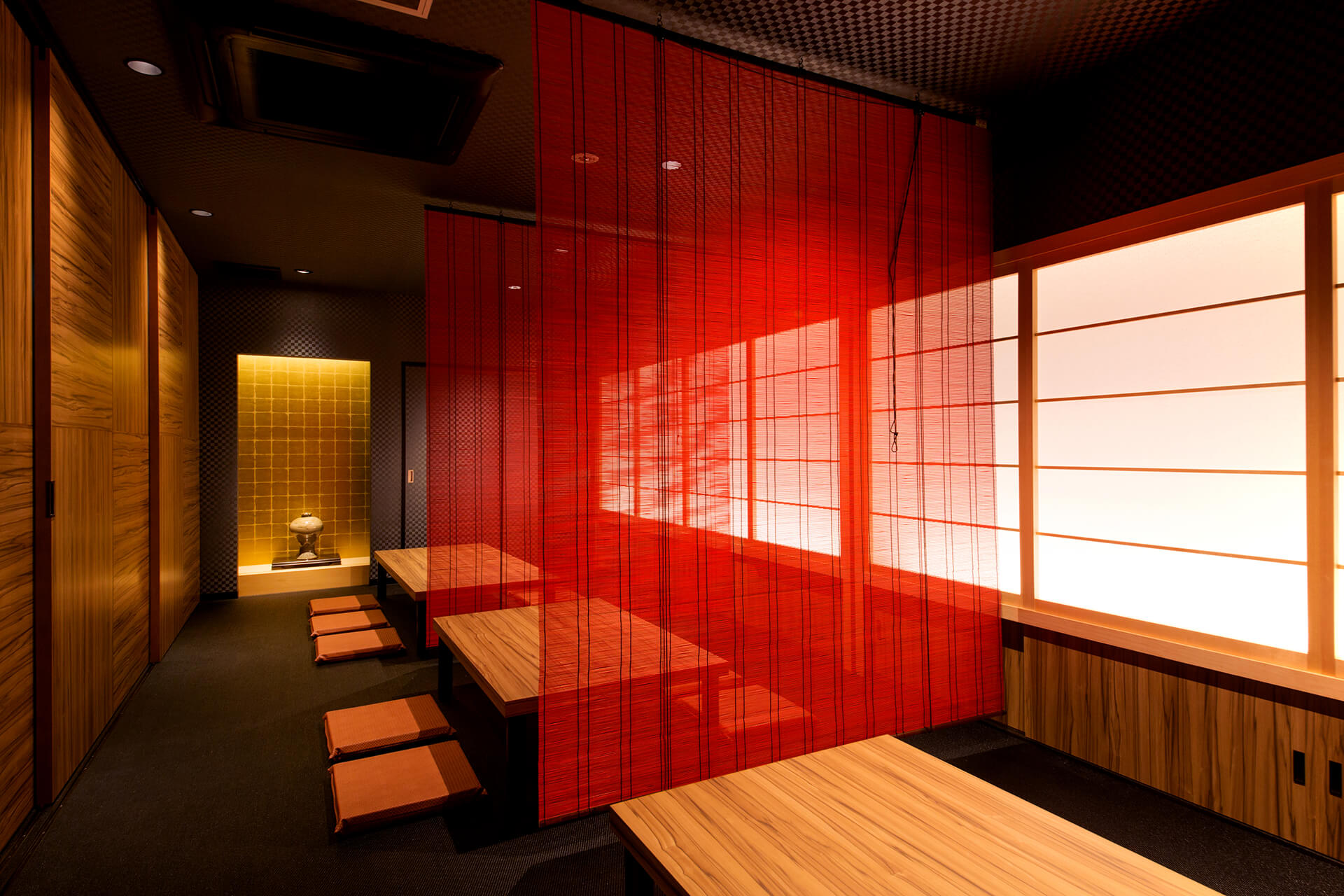 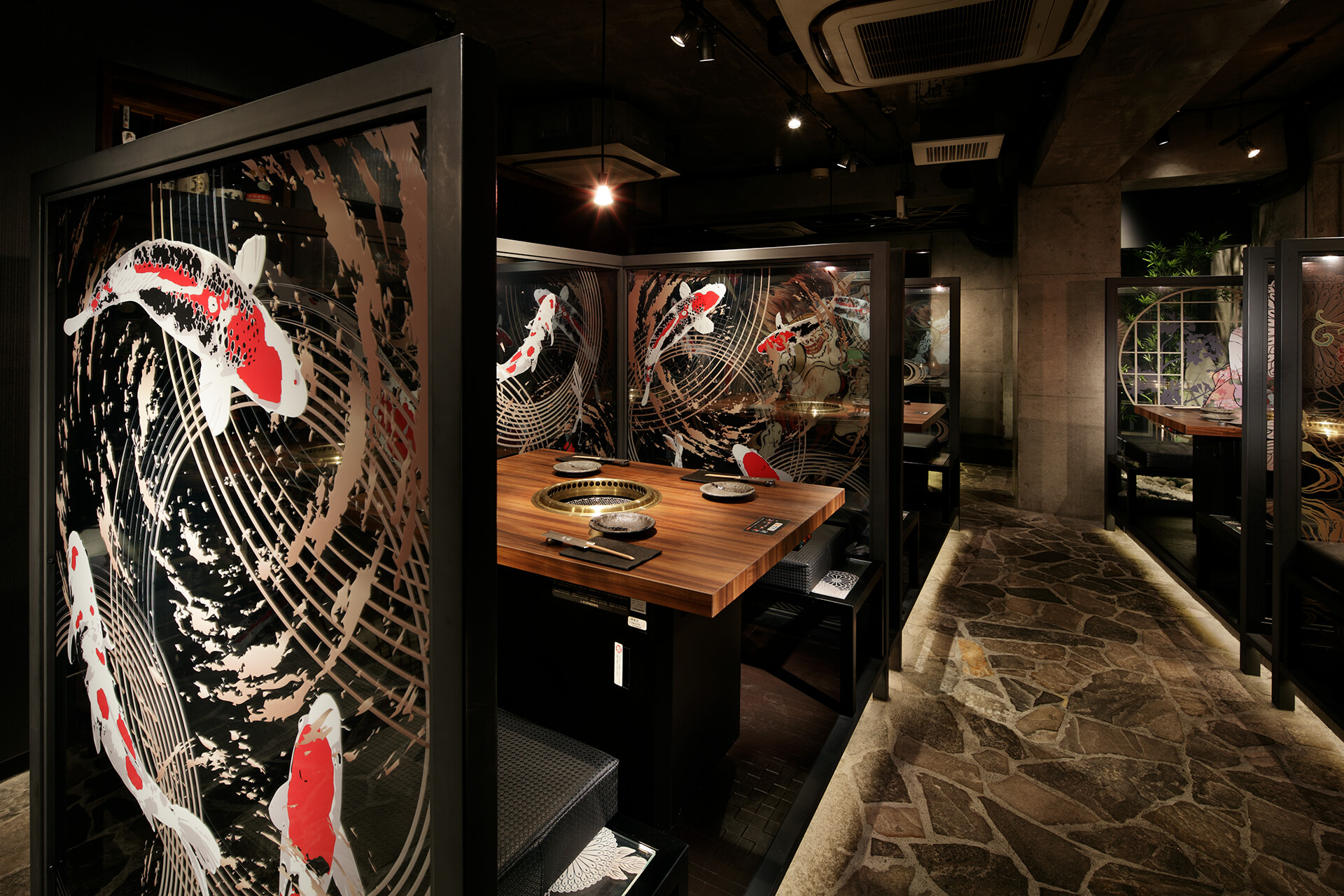 Spatial design varies considerably according to available area. Additionally, to the existing configuration of a building. An ‘island type’ can be used when there is a generous space: it consists of small dining spots – either closed, semi-closed, or open – that are placed individually, separated from each other by a considerable amount of space. This archipelago-like distribution uses the created space in between dining rooms to elaborate upon the design concept.

VIP rooms are cell rooms that fit a larger group – from six to ten people – and are exceptionally designed using the finest materials and the highest standards of comfort. Most Japanese luxury restaurants are equipped with one or two VIP rooms that can also be combined to fit a larger group. 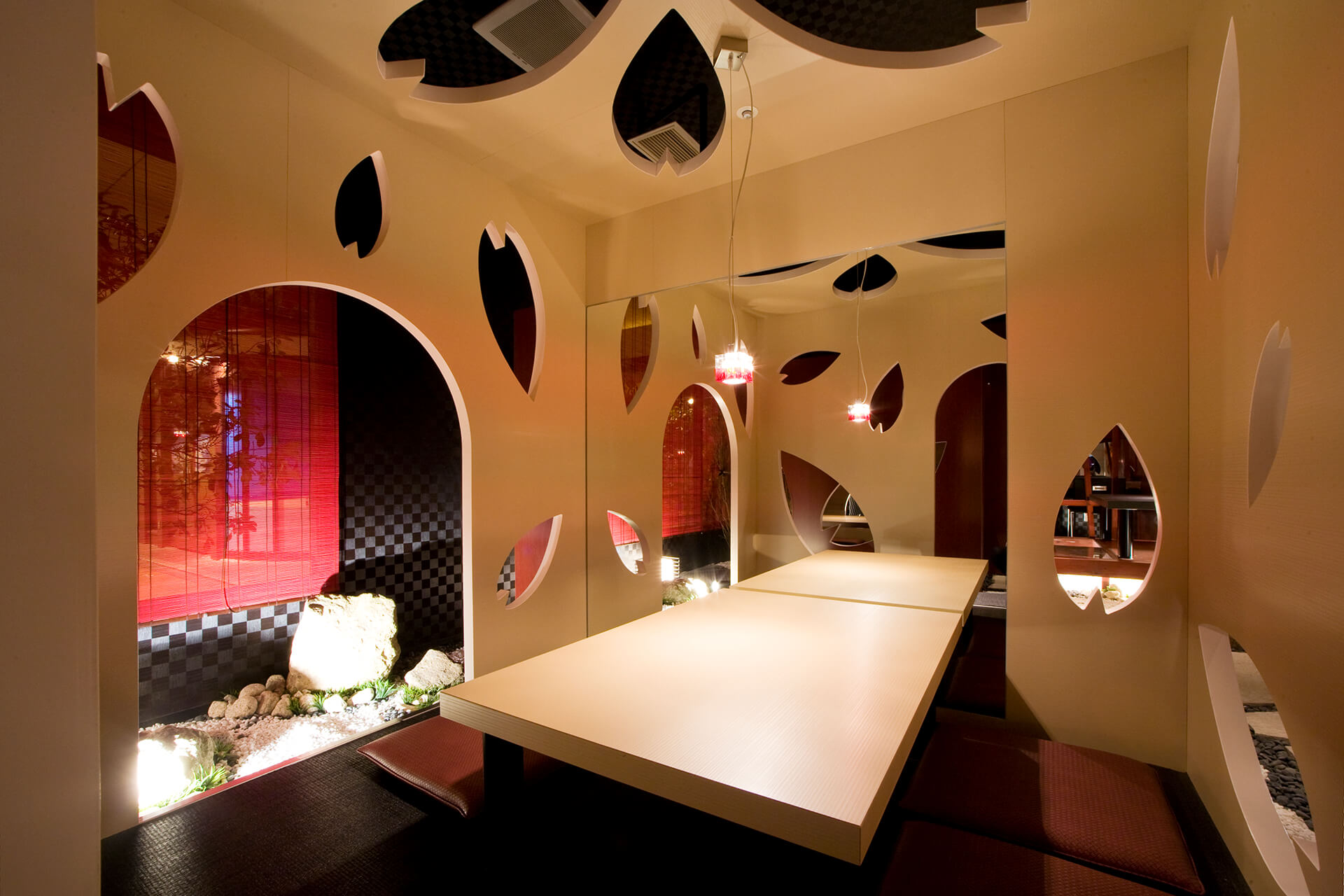 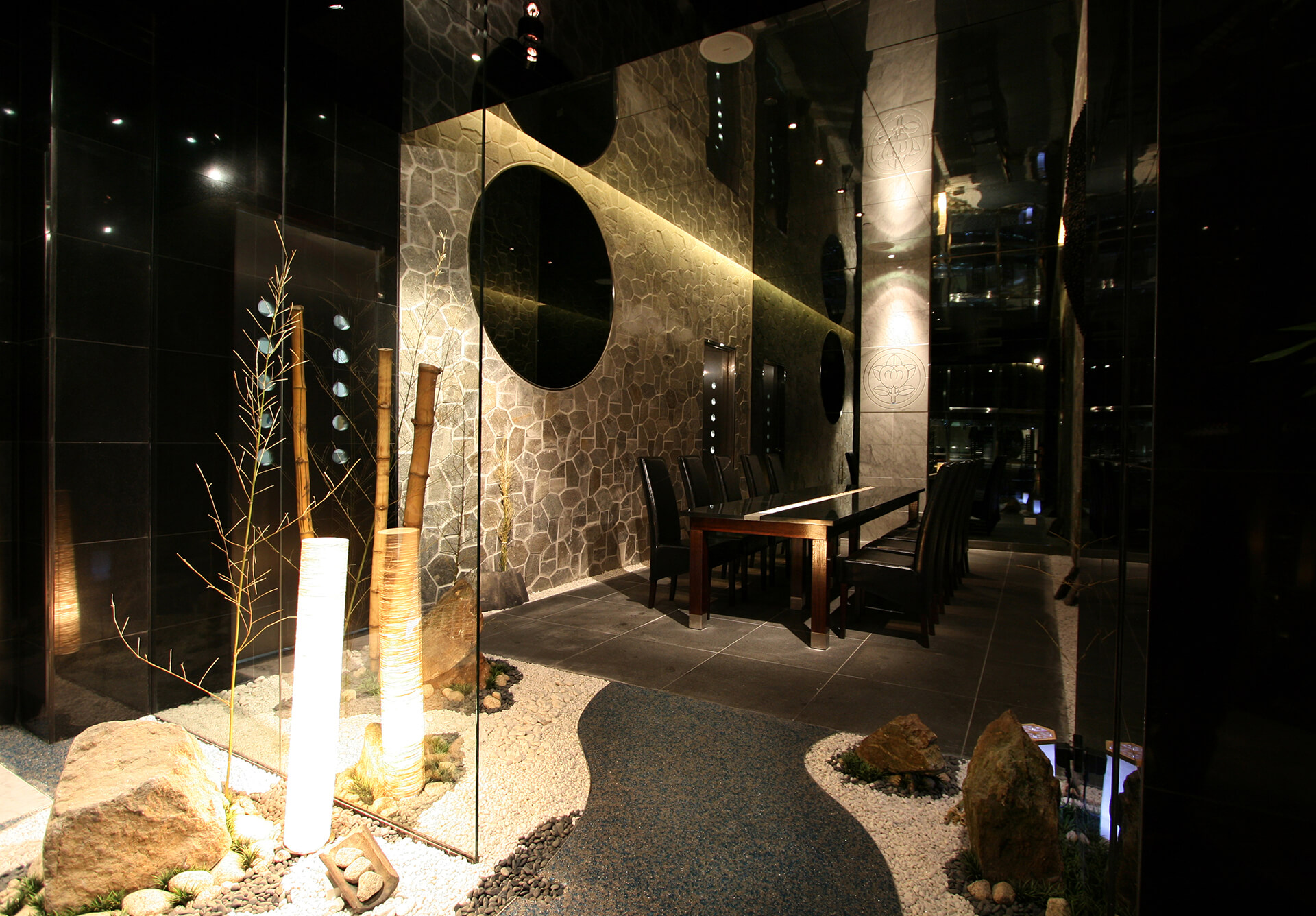 Top: A cell room within a semi-closed room in Sakura Restaurant. | Bottom: The VIP room at the TEN Japanese restaurant in Gold Coast, Australia provides space for ten people. While it is not a completely closed space, it is separated by a path leading to it, surrounded by a small Japanese mineral garden. Photos: Courtesy of KTX archiLAB

The counter space is dedicated to the smallest dining arrangement, from a one-person dining experience to that of two people or a small group. Counter-space dining is unique in that the chef prepares the dishes in front of the customers, showcasing their techniques for an experience almost like performance art. The counters vary in size, seating four to a dozen people.

The banquet hall is the largest room in Japanese restaurants. They are especially made for celebrations and ceremonies, meant to receive considerably large groups and fitting several dozens of people. These big rooms can also be divided using Fusuma panels or Sudare screens to create smaller entities, offering a flexible use of space according to the number and the size of groups using them simultaneously. 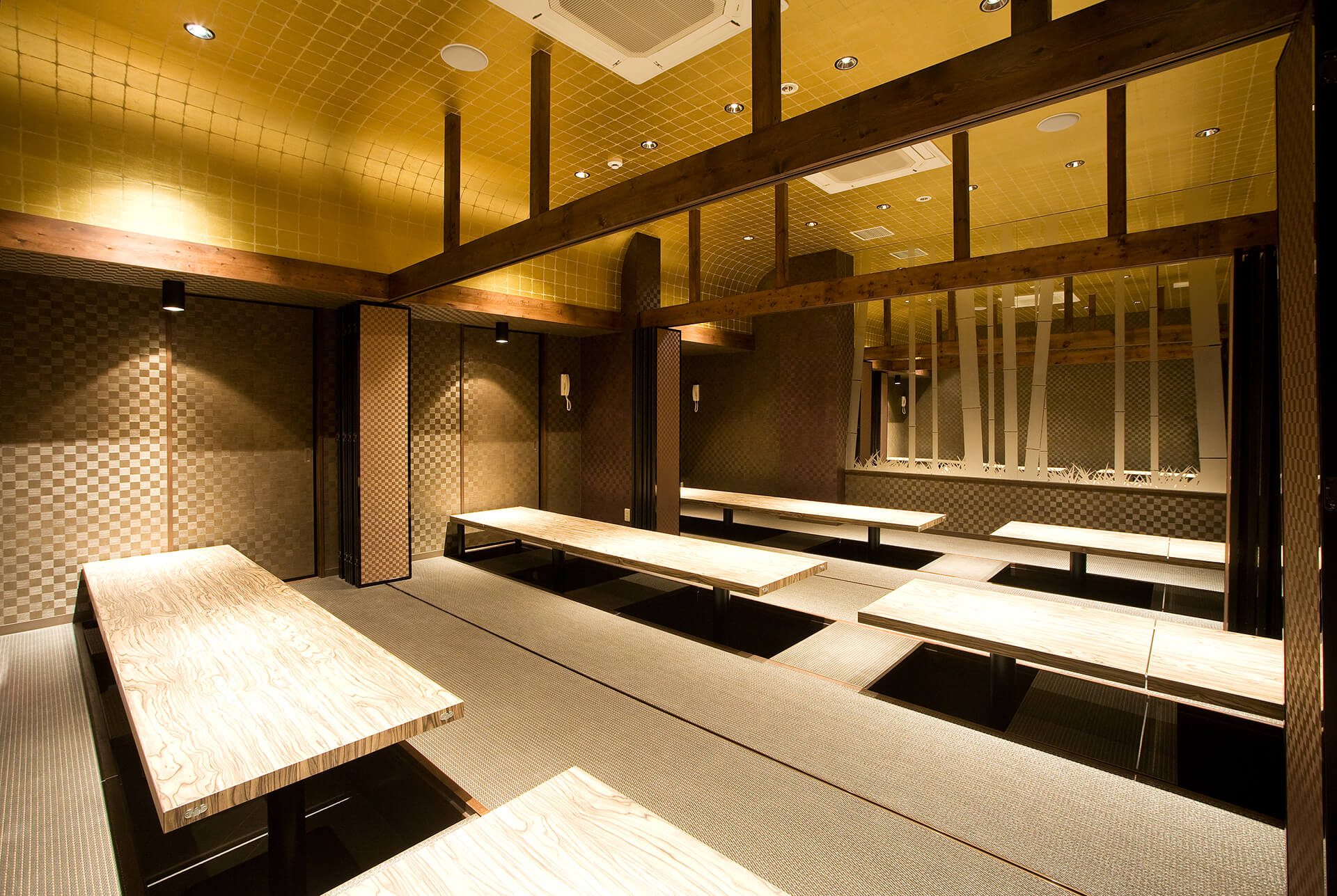 At Tsunofuri, the banquet hall is hidden behind a mirror with a printed pattern. It also offers the possibility to be divided, using foldable partitions. Photo: Courtesy of KTX archiLAB

Each restaurant needs to accommodate its customers according to their needs. This means that each restaurant needs to provide a variety of spaces while also providing the services required in each of them. The layout is a strategic use of spaces that takes into consideration not only design needs, but also customer flow inside, privacy, serving and traffic.

The Japanese aggregated restaurant layout is rather an appealing feature than a cold system of separation which kills the atmosphere. Each cell and each restaurant has its own concept that retained throughout the design of the small spaces – adding more richness and value to each dining space, better performance, intimacy and security.

This guest piece was authored and shared with Frame by Matsuya Art Works / KTX archiLAB. It has been edited for length.