From suburban outposts to intelligent wayfinding and open-air office spaces, here are the trends from the past year that will help you navigate the future of workplace design.

Working from (near) home

As became increasingly clear over the summer, after the initial shock of home working subsided, the post-pandemic office will be distributed, not dead. Back then we referenced CBRE’s 2020 Global Occupier Sentiment Survey, which concluded that ‘the role of the city centre headquarters likely won’t disappear, but employees will have more choice over where they work. City locations may serve as a more transient cultural base for employees in a broader real estate footprint that may include an employee’s home working environment and satellite locations near workforce population clusters’. Large-scale employers such as Deloitte, KPMG, and the Bank of Montreal are figuring this new reality in terms of a ‘hub-and-spoke model’ according to Sheila Botting, president for the Americas at the commercial real estate company Avison Young.

The role of the city centre headquarters likely won’t disappear, but employees will have more choice over where they work

‘Many corporate occupiers are saying let’s have a downtown hub, and suburban west, east and north spokes, so that people can have their office close to their home if and when they want to go to the office,’ Botting told Fast Company. It’s what workers appear to want. A survey of employees based in Greater London by workplace operator Spacemade found that 43 per cent want to work in a local workspace some or all of the time in future, with the preferred option being 2-3 days a week working from a local location (61 per cent) and 2-3 days from a central office. Indeed the watchful amongst you will have noticed how WeWork shifted its messaging at the start of the summer to emphasize how it could help members decentralize their office and develop a ‘work from near home’ strategy. 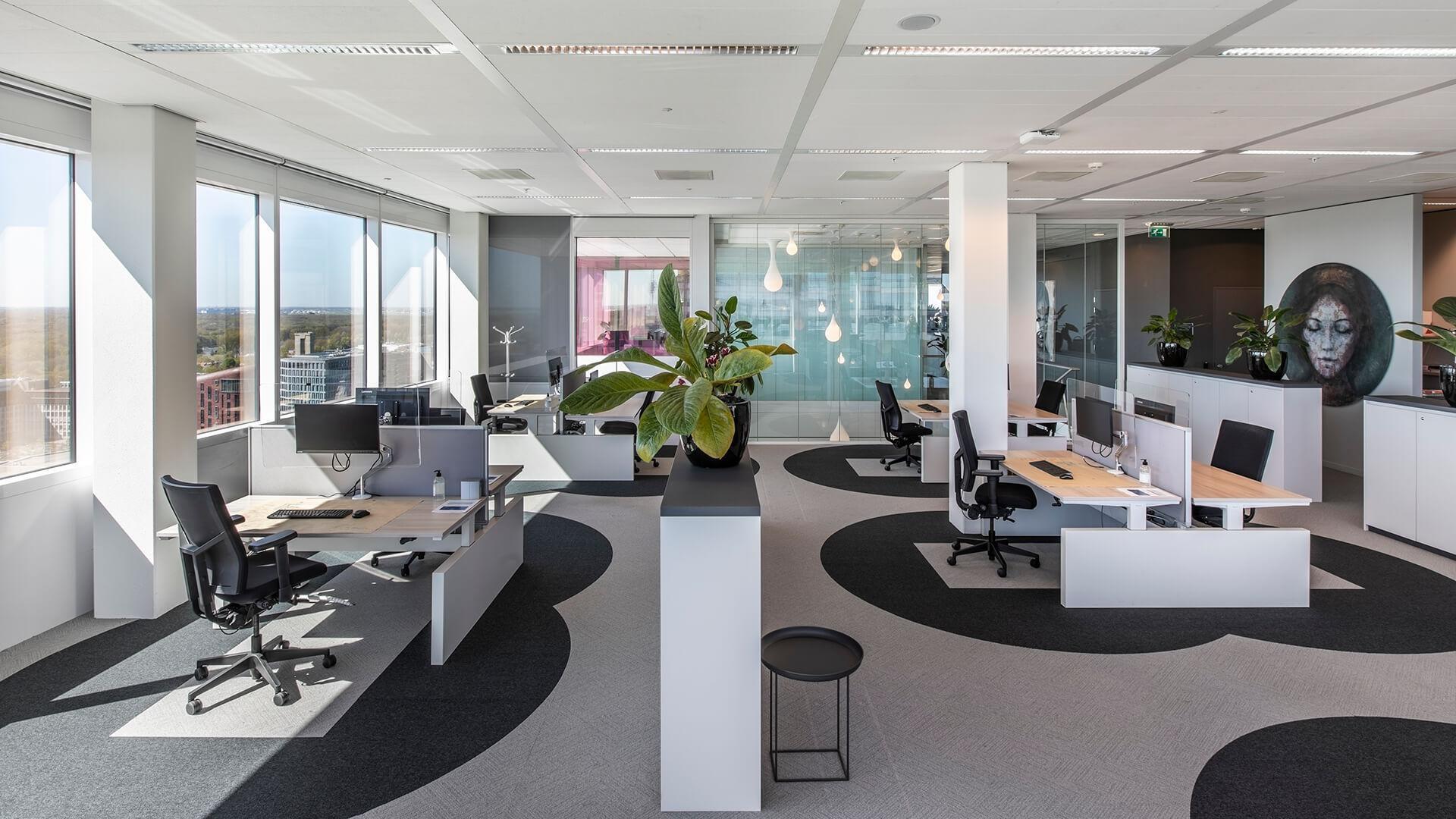 While proprietary offices will persist, what does seem inevitable is a reduced concentration of staff in such spaces. ‘I think the notion of putting 7,000 people in a building may be a thing of the past,’ said Barclays’ CEO Jes Staley. ‘And we will find ways to operate with more distancing over a much longer period of time. Keeping staff two metres apart is pretty much impossible on a busy trading floor, unless you sharply reduce the number of people in the office at once.’

As employers come to terms with operating teams that are constantly shifting between spaces, they are going to have to develop systems that help them manage where people are at what time, when they have to be together and when they can be apart. Though it has most often been used to track the underutilization of space, HOK’s director of workplace Kay Sargent believe that this will see a repurposing of sensor technologies. ‘Now it’s going to be used for the opposite — whether [space is] appropriately utilized,’ she said in a recent interview with The Washington Post. ‘Do we have the right spacing? Are there pinch points where there’s overcrowding?’

Imagine being alerted to the fact that there’s a large crowd just around the corner, and then being able to adjust your route

Understanding what audio or visual feedback can be embedded into the environment to indicate these infractions without causing stress will be an important design challenge. ‘Systems that can react to crowds, that understand where crowds are and how they’re moving, will definitely come to the fore,’ says Tim Fendley, founder of wayfinding consultants Applied. ‘Imagine being alerted to the fact that there’s a large crowd just around the corner, and then being able to adjust your route – or else wait until it has dissipated.’

Get the full story here and here.

The cost of collaboration

What sort of fit out justifies the cost of running a physical office in an age of increased remote working? When CBRE’s Furniture Advisory division ran a study with 31 internal and external partners to query what relevance dedicated workspaces still had, the answer was clear: collaboration.  An environment that supports the sort of creative communal tasks that can’t be achieved via screen is one workers will still value. According to respondents what that meant in practice was the creation of far more flexible furniture systems, ones that could adapt to differing tasks and group sizes across a freeform office space. Considerations included: lighter-scale materials for ease of reconfiguring; better acoustic capabilities; and technology integration that ensured connectivity to off-site workers. The latter also raised the need for furniture products that embed wireless or mobile power and data solutions.

Further confirmation of this shift came in an AdAge interview with McCann Worldwide chairman-CEO Harris Diamond and chief operating officer Bill Kolb, who confirmed that their reoccupation strategy would focus on spaces where ‘people can meet to participate in new business pitches, work on creative reviews or discuss other important issues’. These will be upgraded with technologies that allow remote workers to contribute to on-site discussions, they added.

All this will come at a price of course. ‘We will likely experience an overall increase in furniture costs with the next generation of furniture,’ write authors Julie Deignan, director of CBRE Furniture Advisory Service and Tina Lamkey, studio lead for CBRE Design. ‘The quantities of workstations may be reduced, but the potential increased workstation componentry and/or more adaptable/hackable collaborative furniture may offset any decreased costs.’

The need for diverse design

Spatial design has long taken account of our physical differences, but has only recently started to consider how it might address our unique psychological needs. After the events of 2020, that will be more important than ever.

‘We’re living in a time now where there is a heightened awareness of the fact that there are a lot of people that are neurodiverse,’  says Kay Sargent, director of WorkPlace at the international architecture firm HOK. ‘A staggering statistic that just came out showed that a third of the people that get COVID are now considered long-haulers – individuals that have some lingering ramification or side effects of the virus. Many of those happen to be neurological. We are going to be dealing with an increased number of people that have neurological disorders has just increased even more.’

HOK has been exploring how neurodiversity might better be served in the workplace by looking at six work modalities – concentrating, commuting, processing work, getting creative, congregating and contemplating – and defining the elements and layouts required for neurodiverse workers to succeed in each. ‘We need to look at “hypo” and “hyper” versions,’ she said, ‘and understand that we can design environments that are inclusive for all, even in small spaces . And we can create a variety of options where people have choices: they have hyper-focus rooms, but then also collaborative spaces. It’s really important that we don't design these spaces as kind of a destination within the workplace. They have to be integrated into the solution, just like we do for physical disabilities and accessibility.

While the health implications of poor air have long been known, 2020 has brought them further into focus. There’s plenty of evidence that prioritizing air quality has many benefits beyond pandemic prevention, however.  Indoor air pollution is a core contributor to what’s referred to as ‘sick building syndrome’. Last year a study published in the journal Nature showed its relationship to noticeable declines in cognitive performance. Remark Group’s 2019 survey Air Quality and Wellbeing at Work revealed that, out of 1,000 UK office workers, 80 per cent believe poor indoor air quality could be having a negative impact on their health, with the same amount reporting it could have a similar effect on their productivity at work.

One low-tech solution suggested for the future office by Darren Comber, chief executive of Scott Brownrigg, is ‘more openable windows’ that allow buildings to refresh, rather than simply recycle, air. A recent spate of offices have already taken this idea of an outward-opening workplace to its logical conclusion, softening the barrier between interior and exterior.

This shift is not just about access to clean air, but nature itself, and can be seen as the next phase in workplace design’s embrace of biophilic principles. As Macomber and Allen point out, investing in biophilic design makes a lot of sense post-pandemic. ‘The amount of indoor nature and views matter. Young adults in an office designed following biophilic design principles had lower blood pressure, lower heart rates, and better performance on short-term memory tests.’ Significantly, given the current crisis, it has also been shown to boost immune system performance.

Get the full story here and here.