Alberto Caiola grew up in Pordenone, an Italian province about an hour’s drive from Venice. In 2002 he began studying product design at Politecnico Milano, which he calls ‘a conservative, classical school.’ While learning about design theory and the great masters, Caiola immersed himself in the ‘city that breathes design.’ He and his comrades were frequent visitors to events and exhibitions. ‘We took everything the city had to offer, which was more than it offers today. Coming from a small town, I felt for the first time that I was part of the creative world.’

In 2006 Caiola ventured to the Design Academy Eindhoven (DAE), where he chose Design in Context for his master’s degree. After returning to Italy and working for the likes of Aldo Cibic, the designer made a more drastic move. In 2010 he relocated to China, and in 2014 he officially established Alberto Caiola Studio in the country’s most populous city: Shanghai. Dedicated to interiors, exhibitions and product design, the outfit has since become synonymous with new-wave spaces.

What took you to Asia?
ALBERTO CAIOLA: I followed my girlfriend. She studied Chinese, so we thought we’d give the country a try. A project for the design fair [then called 100% Design] that was meant to last for seven weeks has continued for seven years. 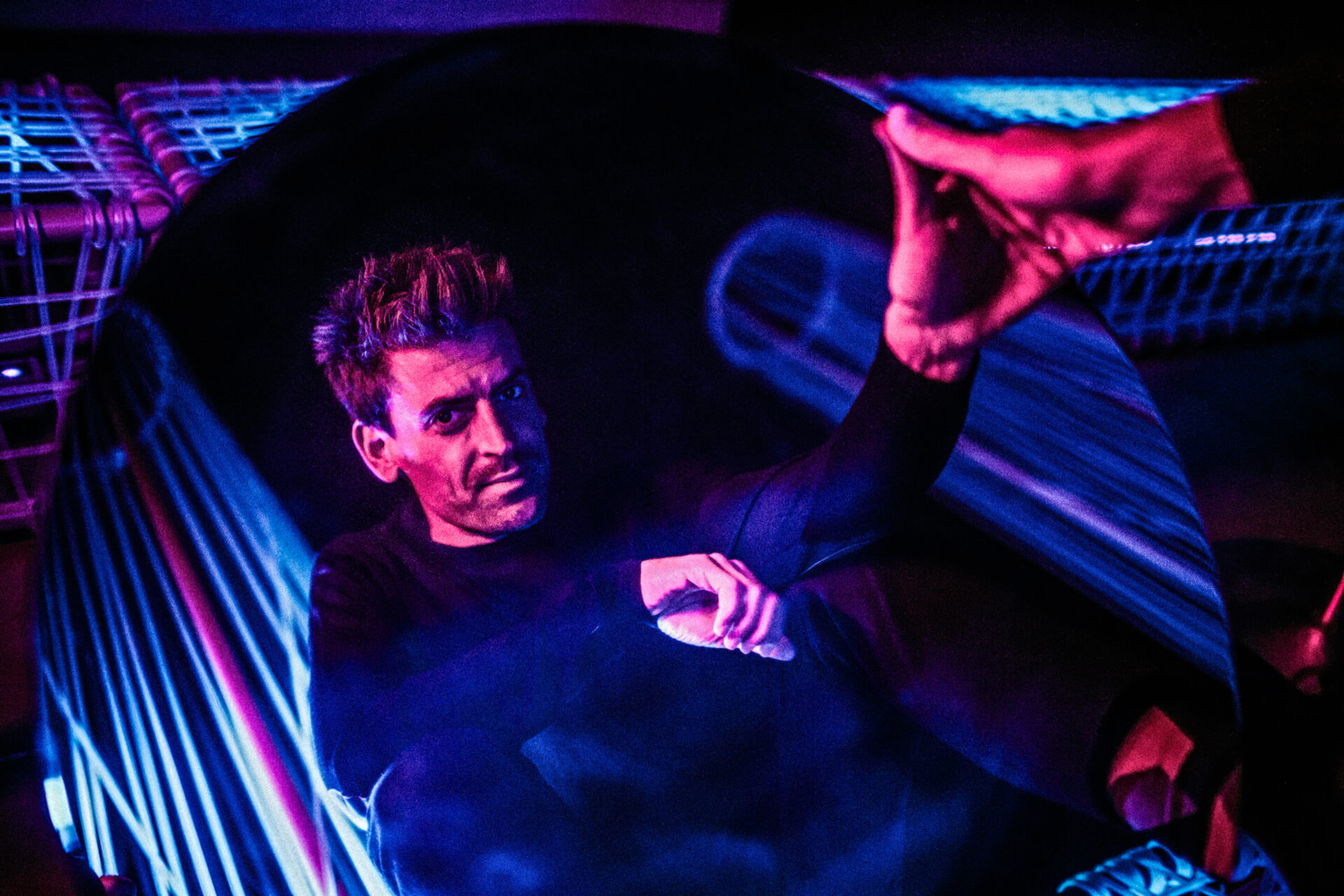 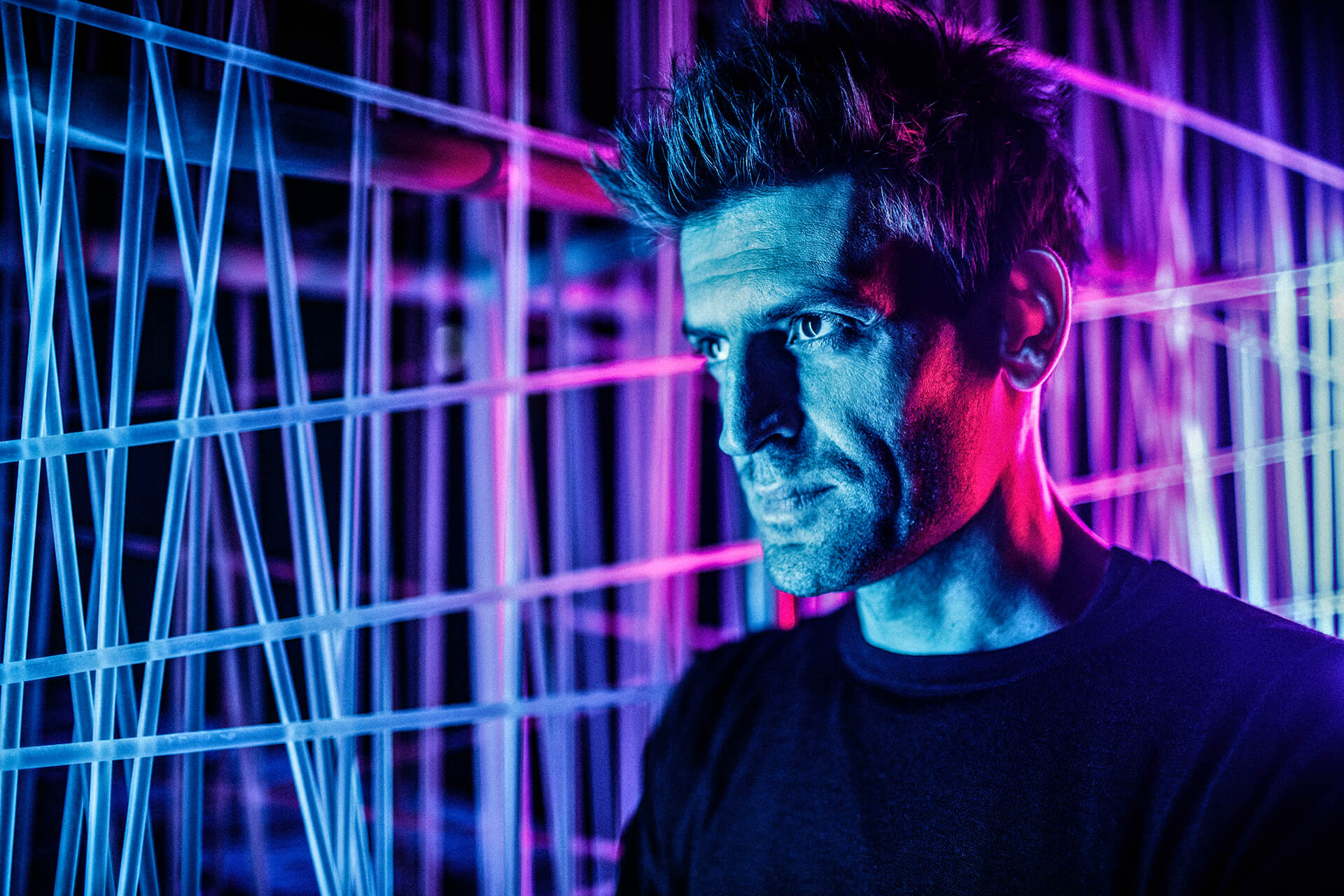 Italy has such a rich design tradition, unlike China, where buildings are often ripped out to make way for new ones. How do you find working in Shanghai as an Italian designer?
Everything changes in a heartbeat here – including the attitude towards historical space. Architects in Shanghai are starting to transform beautiful old buildings into museums, for example, while Beijing’s traditional hutongs are re-emerging as boutique hotels and retail stores.

When I arrived, I feared the market would be too different – that satisfying a client’s taste would mean abandoning my own wishes. But that wasn’t the case. Design is more explorative here. Clients are looking for something extraordinary and are willing and able to invest in it. There’s an extreme energy and positivity in China that I don’t think you’ll find anywhere else in the world right now.

I don’t want people to feel at home in my projects; they should feel like they’re on the moon or on Mars

How would you describe your design methodology, and how does it manifest in your projects?
I don’t take myself too seriously. I try to have fun – and to pass that fun on to a project’s client and users. I’m questioning the current design landscape and searching for new visions. Recently I discovered a few key phrases that sum up my work: ‘richness of meaning’, ‘unfamiliar combinations’, and ‘complexity and contradictions’. My practice is very much influenced by life in Shanghai. It’s a place of contradictions, with one foot in the past and the other in the future. I try to synthesize these ideas into my own recipes.

Something I often hear about in the design world is the desire to make things homey, familiar. I don’t want people to feel at home in my projects; they should feel like they’re on the moon or on Mars. I want them to wonder, to have new experiences. ‘Good taste kills creativity’ is a line from a documentary I watched not long ago. The notion holds significance for me.

In China, everything seems a little bent towards the selfie story 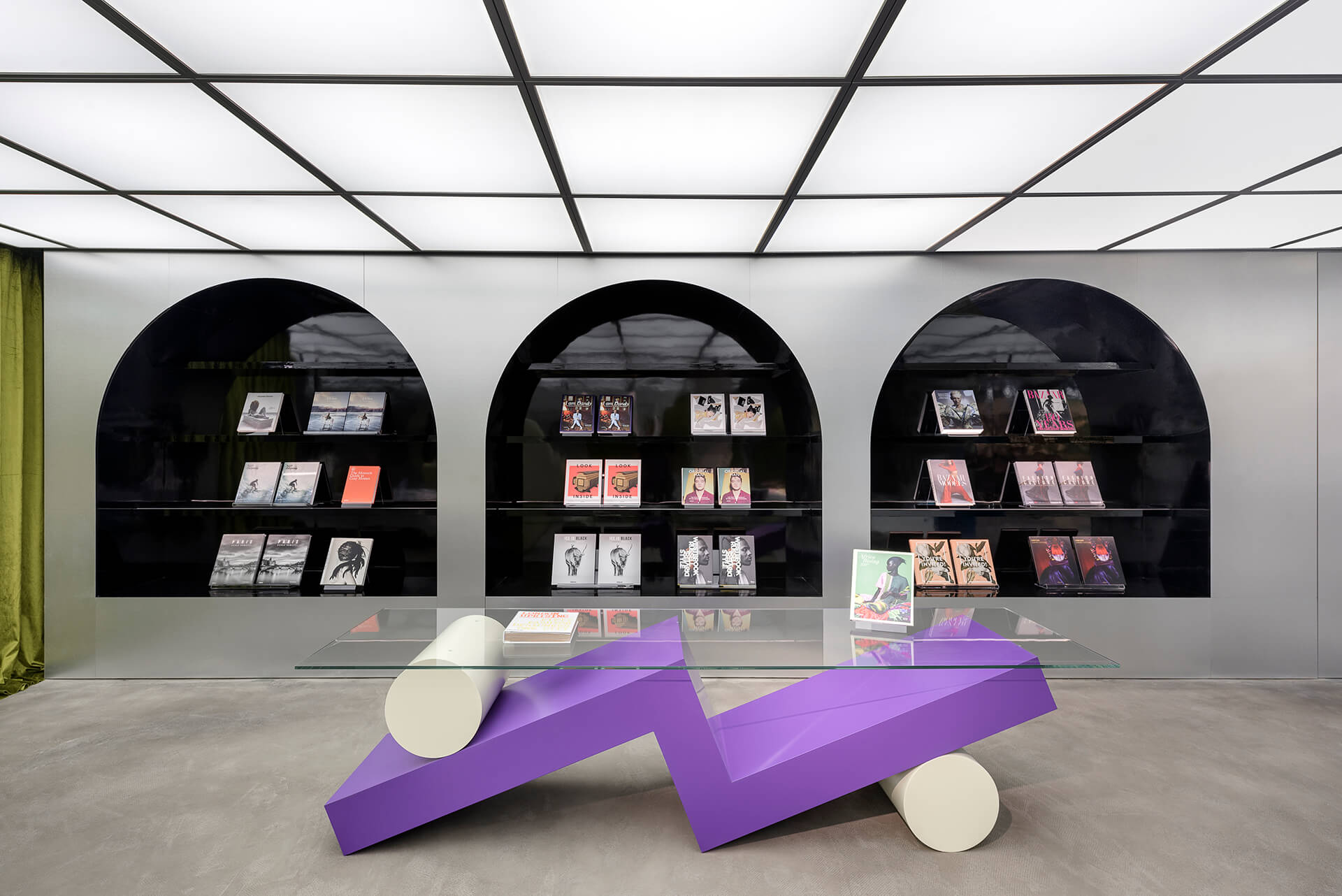 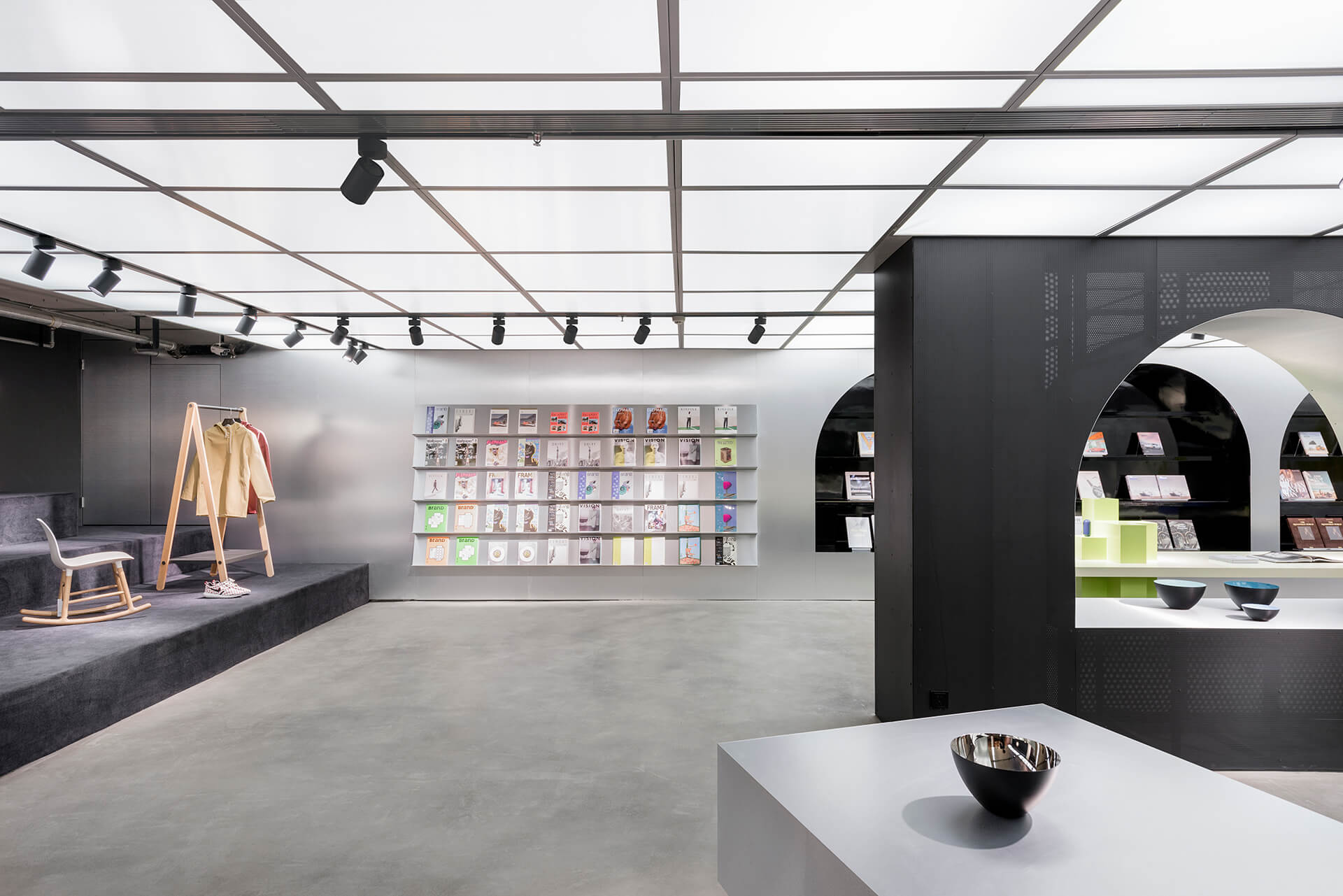 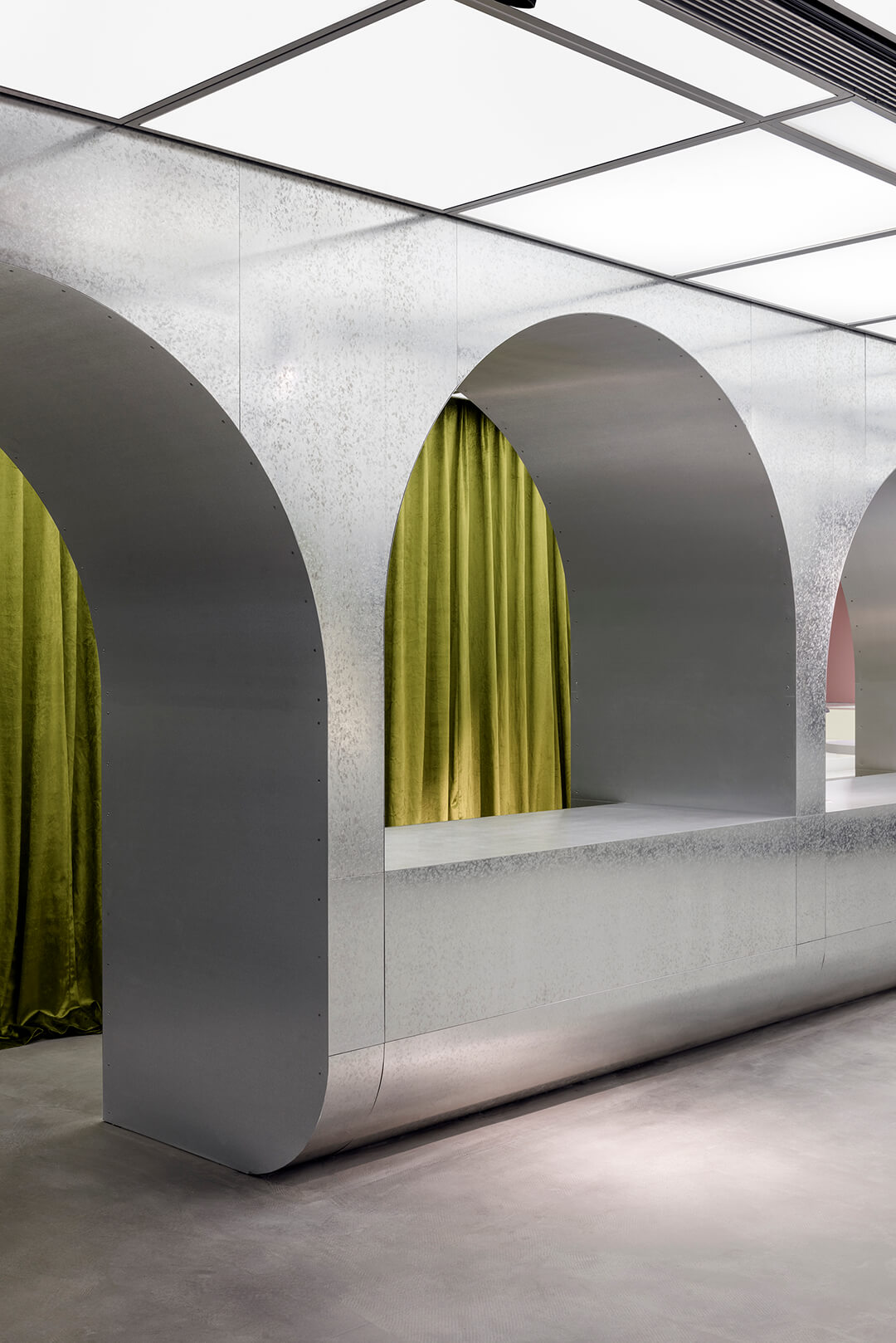 Your Harbook project joins a series of new-wave bookstores in China. If you’re trying to rethink a genre, how do you consider one that’s already in a process of reinvention?
In China, everything seems a little bent towards the selfie story. Sometimes it gets a bit superficial. Exhibition curators understand this phenomenon and deliver eye candy. People go just to take pictures, without engaging in the content or story that the artist is trying to convey. The resurgence of bookstores runs deeper. It shows that people are willing to delve into certain topics and learn more.

I find it most interesting when retail is mixed with other concepts to create cultural and lifestyle destinations. City squares don’t really exist in Harbook’s location, Hangshou, so these types of projects – places for people to meet and talk – fill that void. Harbook comprises a bookstore, a café and a Normann Copenhagen furniture showroom. By including influences from the Italian urban landscape – such as the covered archways that line plazas – I was able to re-create the city-square atmosphere in an abstract way.

This is an excerpt of a piece originally published in Frame 126. If you’d like to read the full version, you can purchase a copy here.