Bord Studio bottles a big atmosphere into a small stadium

In the industrial suburb of the Hungarian capital, division one side MTK Budapest FC has a new ground. Hidegkuti Nándor Stadium hosted the first football match for its home team in October 2016, only nine months after construction started. The building’s namesake previously featured on the team-sheets for his town and his country but local architecture firm Bord Studio has another name for the 5000-seat stadium: The Football Capsule. 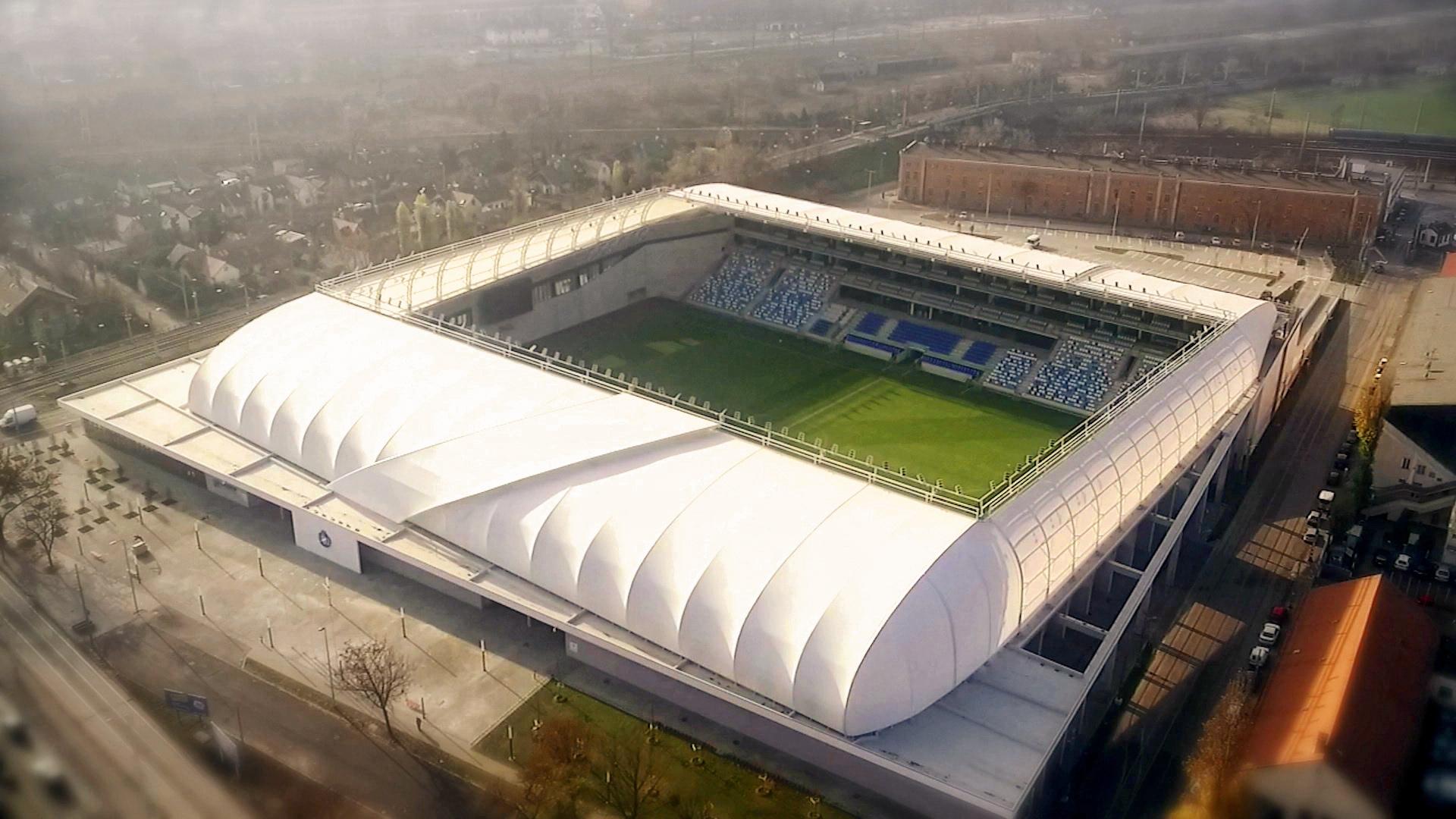 ‘Stadia planned for less than 10,000 seating capacity are considered as small-sized or “mini” arenas,’ the architect considers. ‘The notion of the “football capsule” is a new category on the palette of building types. It is a venue created for football events with a lower spectator capacity but that still meets the functional, geometrical and acoustical requirements of big, modern stadiums and is, therefore, able to provide the desired “real arena” atmosphere.’ Contending with this idea, the stadium incorporates commercial areas, retail spaces and camera boxes within the volume and is characterized by a slanting concrete plate over which the membrane-sheet roof is stretched. 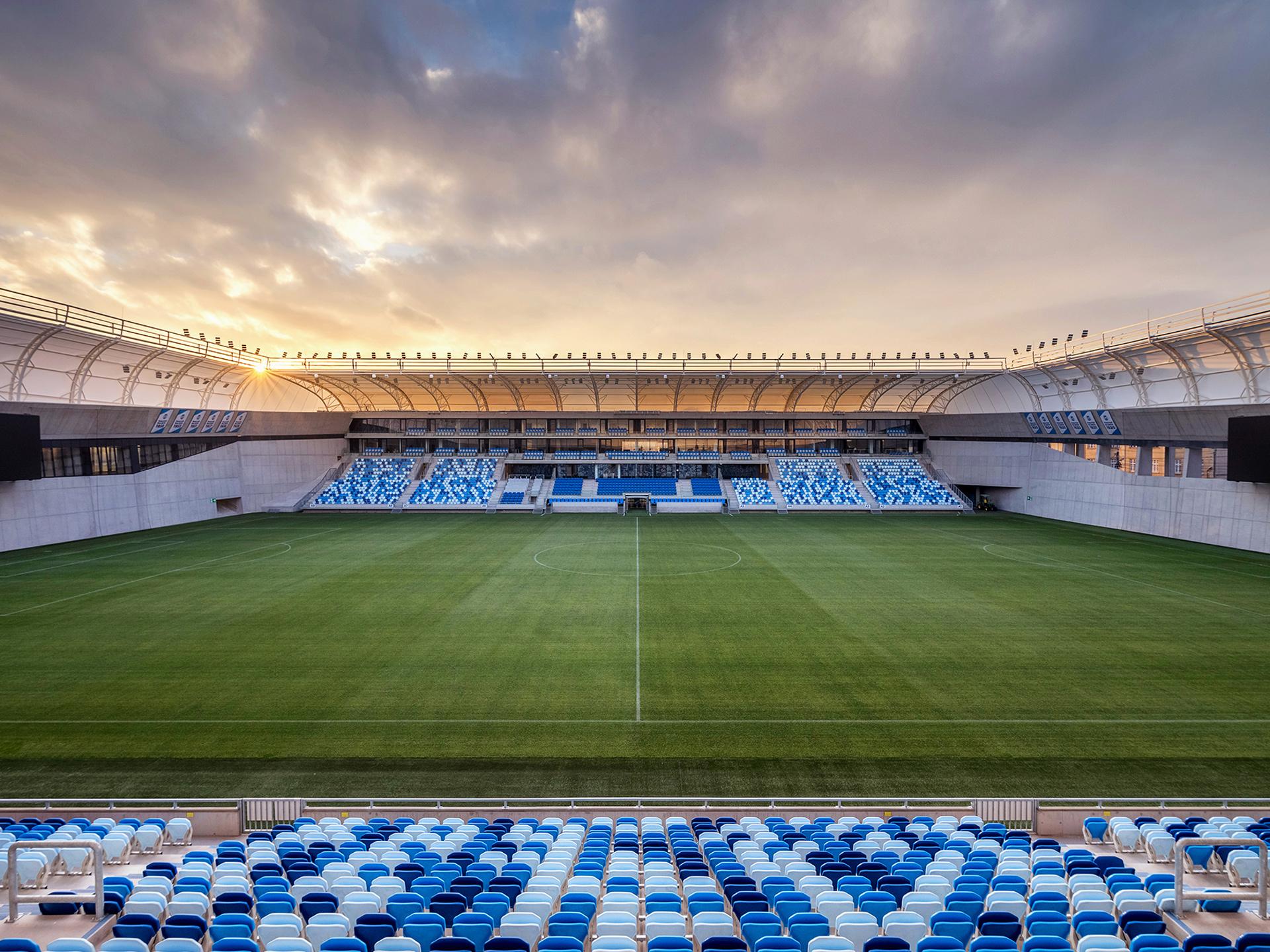 The new structure is situated on the same site as the former MTK pitch. Originally built in 1918 – with an athletics track around the periphery to dampen the atmosphere – the field’s elongated footprint could only fit on an east–west axis. ‘The optimal axis for a modern stadium is north–south, with the main stand on the west side for better sun-protection for the VIP guests and the camera stands,’ the architect explains. From the outset, the main design goal was for the pitch to be rotated to align with the modern standards of any big club but changing the orientation wasn’t without its complications. ‘The rotation of the axis effectively left us with a very narrow site and that was the reason we decided that we would not put seats on the shorter sides of the stadium.’ As such, the spectators are split between the two long edges of the pitch and behind the goals are plain concrete walls. 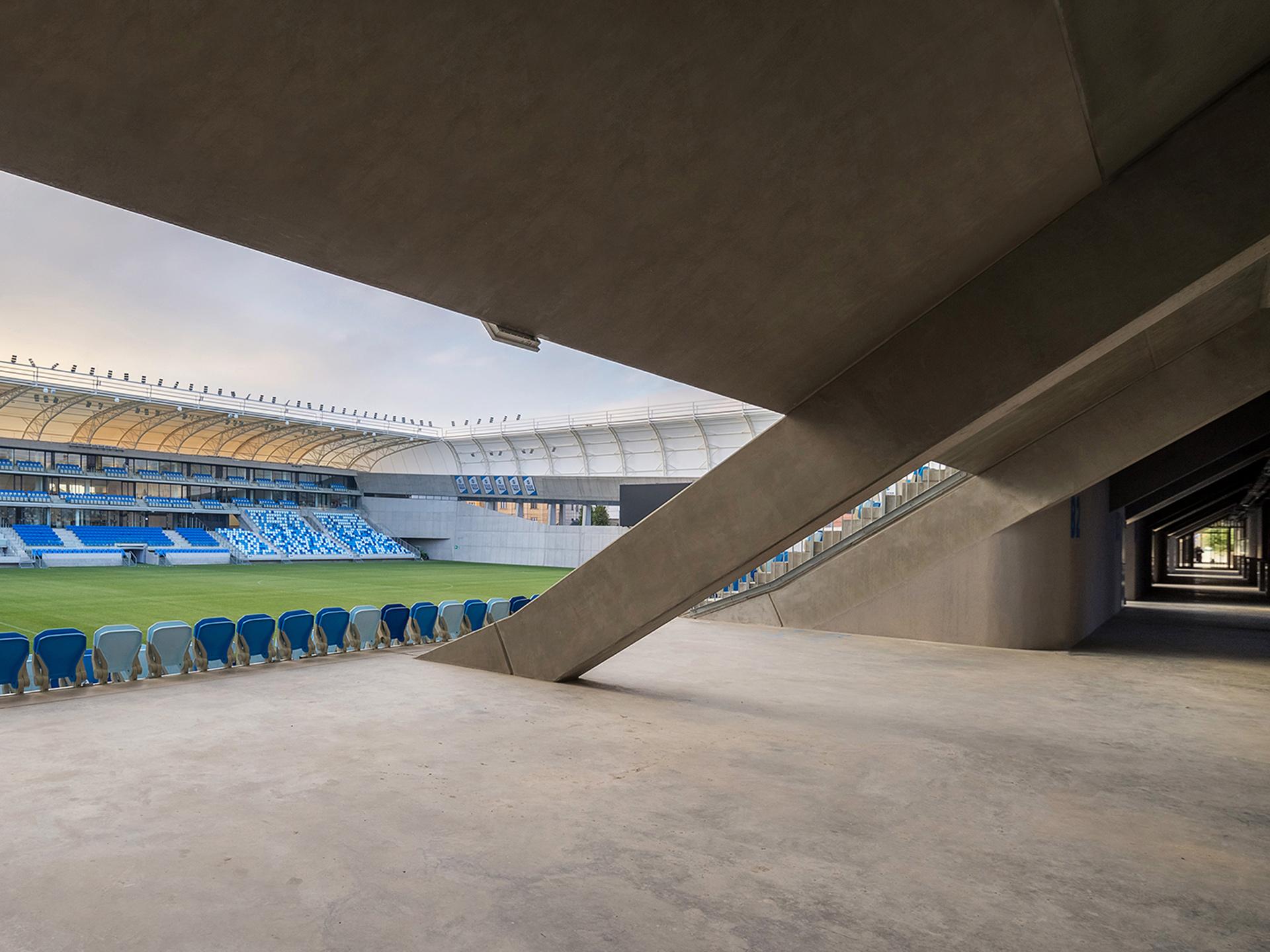 It is true that clubs down the full scale of the hierarchical league pyramid are beginning to think more about competing with bigger arenas to generate a better atmosphere and match-day experience for supporters (anyone who has seen the plans for the new all-timber stadium of British football team Forest Green Rovers, designed by Zaha Hadid, may have wondered how a non-league club could possibly need something so fancy) but it’s not the size that matters. Fans of larger clubs might give little thought to a stadium with a mere 5000-seat capacity but perhaps Bord Studio is seeking to add a sixth category to Rod Sheard’s ‘Five Generations of the Stadium’ for the benefit of the smaller teams whose grounds may not be as big but whose fans nonetheless deserve a home to be proud of. 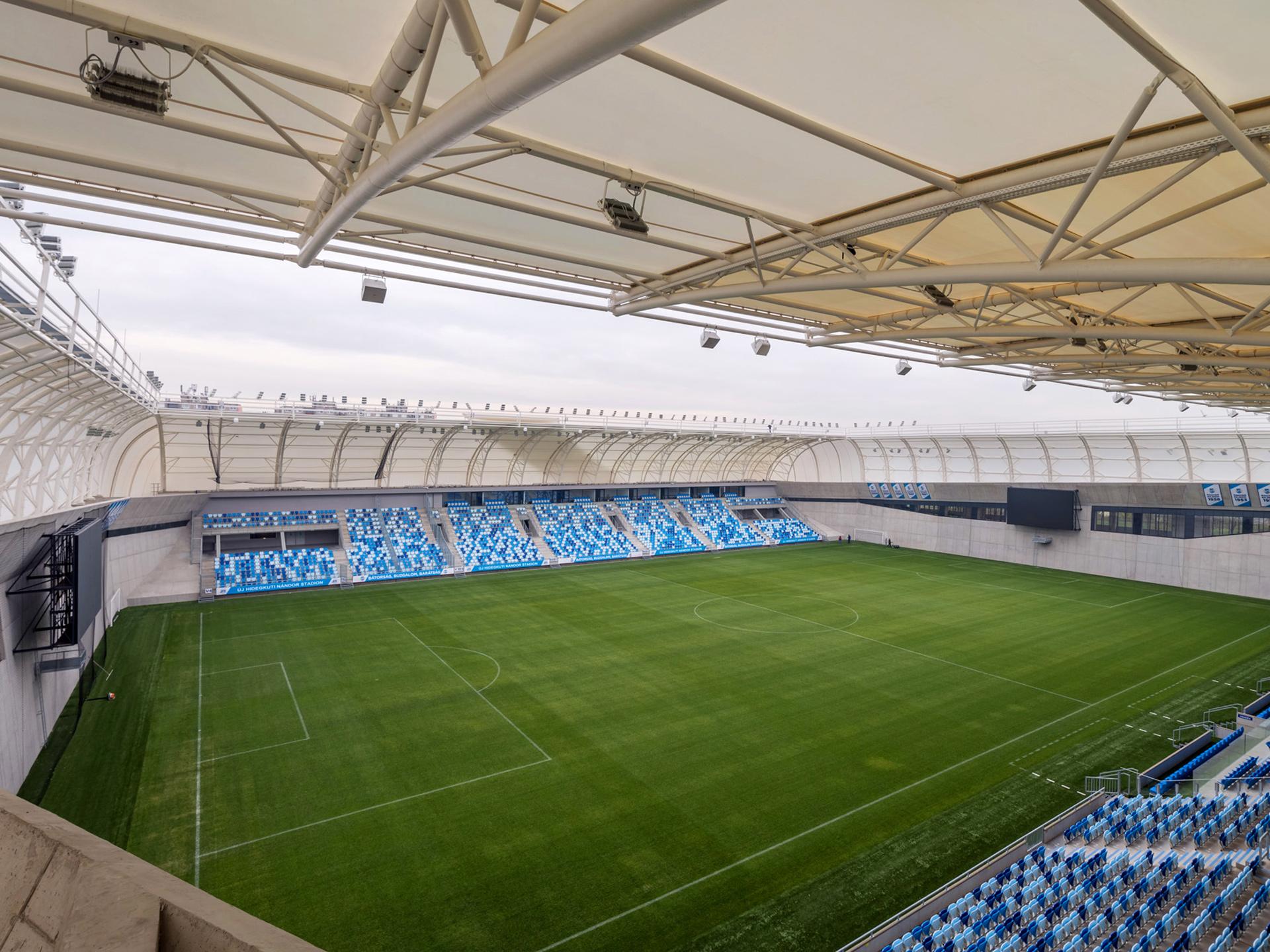 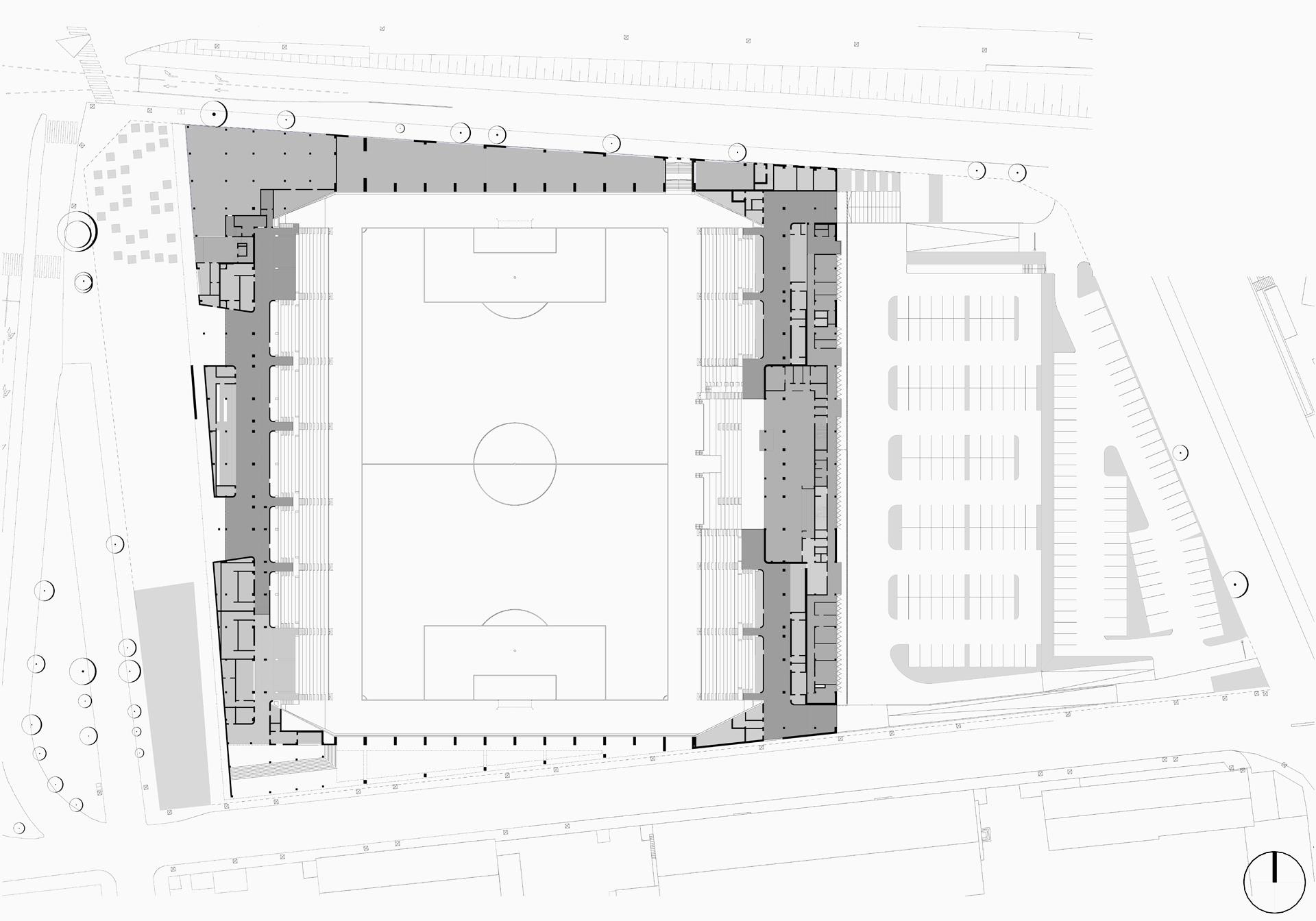