Italian beverage company Gruppo Campari raised a glass of its crimson liqueur at the opening of the Campari Canada headquarters in Toronto. Occupying 890 sqm of the city’s Liberty Village neighbourhood, the office is the brand’s second in North America and its 24th worldwide. In 2014 Campari acquired the Forty Creek Distillery in Grimsby, Ontario, and its latest strategic move allows the brand to place an even firmer foot in Canada. 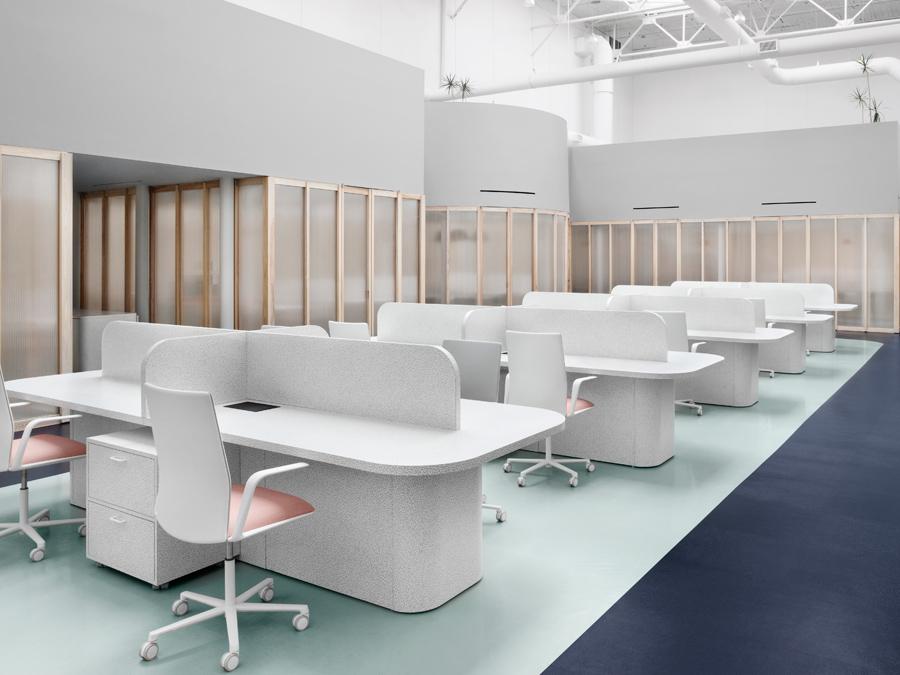 Situated at the end of a cul-de-sac, the new office covers two floors of a former film studio and foundry. Like the liqueur, the interior is anything but subtle. A design by local firm I-V, it adds a dollop of mint to Campari founder Gaspare Campari’s 156-year-old cocktail. ‘The brief was simple’ says lead designer Emil Teleki. ‘Our client wanted a space that would capture the spirit of the company and inspire the people who use it.’ He began by researching his client’s history. ‘We were captivated by Campari’s iconic posters, particularly those by Italian futurists Fortunato Depero and Bruno Munari – and fascinated by Campari’s secret recipe, known by only a handful of people.’ I-V distilled the two aspects – posters and recipe – to create a cohesive office interior. 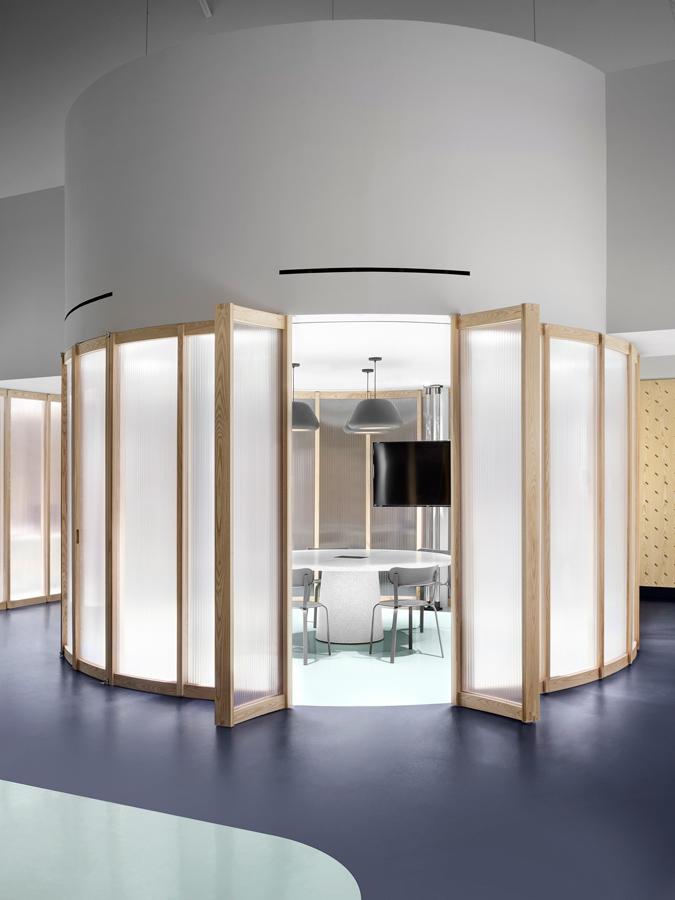 The team approached the project as if it were a collage. ‘We abstracted colours, patterns, textures and shapes from both posters and ingredients,’ says Teleki, ‘and layered them until we achieved a balanced 3D canvas.’ In addition to the standard office must-haves, the workplace includes a tasting bar, flexible open spaces, and formal and informal meeting areas. The result is a graphic mishmash of its disparate components, a project that Teleki stresses is ‘all about materials and colour’. 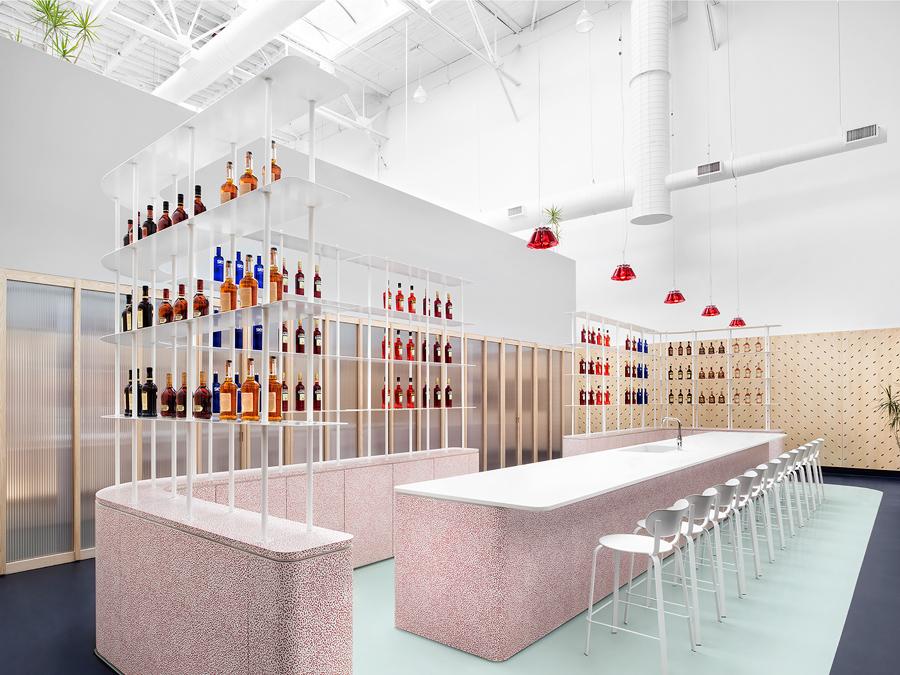 I-V’s lush palette of pastels features peachy-pink furnishings from Sandal and white swivel chairs from Stua, both Spanish manufacturers. Johnsonite rubber flooring defines each work zone. The highlight, a 5-m-long bar, is clad in a peppered pink Balterio laminate, a design by the late Ettore Sottsass. Above the bar are Ingo Maurer’s Campari pendants, each comprising ten Campari Soda bottles. A reference to the cochineal, an insect used to produce Campari’s famous hue, is the sinuous Memphis motif on the ivory surfaces of I-V’s custom-made workstations. ‘The transition from brand to space was quite fluid and organic,’ says Teleki, ‘because we filtered our decisions through the lens of bold, vibrant and experimental design.’ 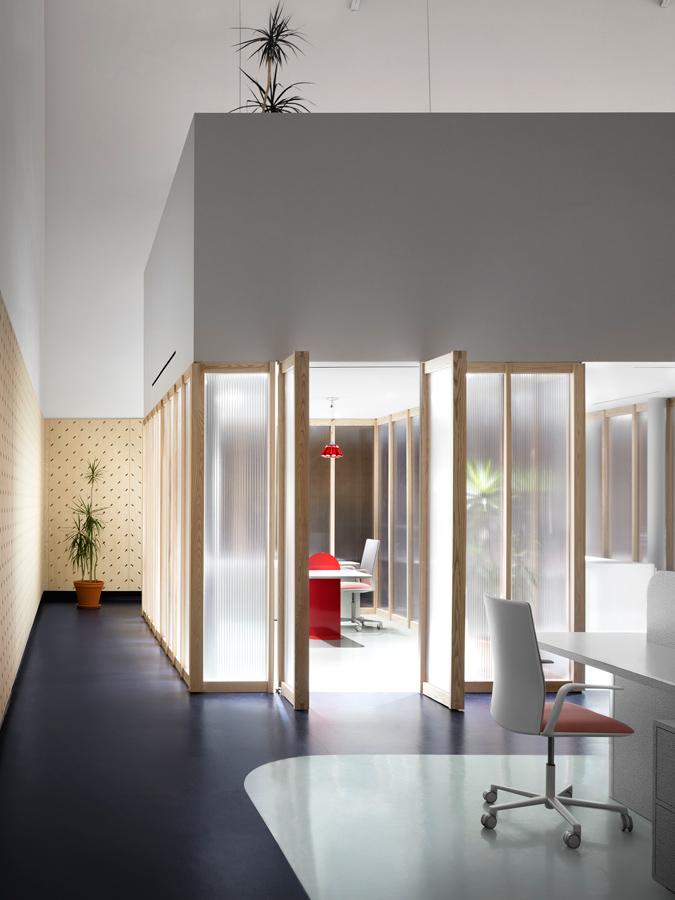