Your future remote workplace is half VR, half carefully positioned real-life objects

Can remote workers be as productive as face-to-face teams in companies that rely on knowledge-sharing? The answer is still no – non-verbal communication, unplanned interactions and bodily proximity are often the fuel of innovative proposals.

But during this year’s Frame Lab, a VR project by London-based designer Paula Strunden showed us how the tech can meet this problem halfway: it can create a virtual space that also makes tactile sense thanks to a set of carefully positioned objects. You know where we’re going with this: What if two different offices had a set of identically placed items?

She originally came up with Micro-Utopia as a response to London’s housing crisis – hers was a dream home made of architectural near-nothing and virtual near-everything. Can this sense of expanding collective domesticity be extended to the workplace? As Quartz’s Ashley Rodriguez pointed out in a piece about immersive VR theatre, the technology’s storytelling potential has been held back ‘by the lack of real interaction.’

We spoke with Strunden to discuss the potential of this type of intangible projects to create a very real layer of comfort for the future workspace.

As exact measures can be replicated in two different environments, and face-to-face contact is so important for companies based on knowledge-sharing, do you see any applications for this project beyond the home?
PAULA STRUNDEN: Definitely. The concept of creating virtual environments through the body’s interaction with real-world objects can be applied to various fields. In fact, supported by the Stimuleringsfonds, we at Soft Bodies are currently working on a collaborative location-based VR experience titled Weightless Bricks and Other Stories about the Future Prospects of Virtual Work Environments. It challenges contemporary forms of co-working and its communication tools.

Work today is the most ephemeral and nomadic it has ever been, so how can our workspaces catch up? Our ubiquitous tools, the computer and the smartphone, have subsumed all forms of interaction, making our primary methods of communication speaking and writing. We see immersive technologies as a tool to explore what can’t be communicated in this way, and seek to find out whether there is room for intangible communication. How might these spaces look, smell and feel like? 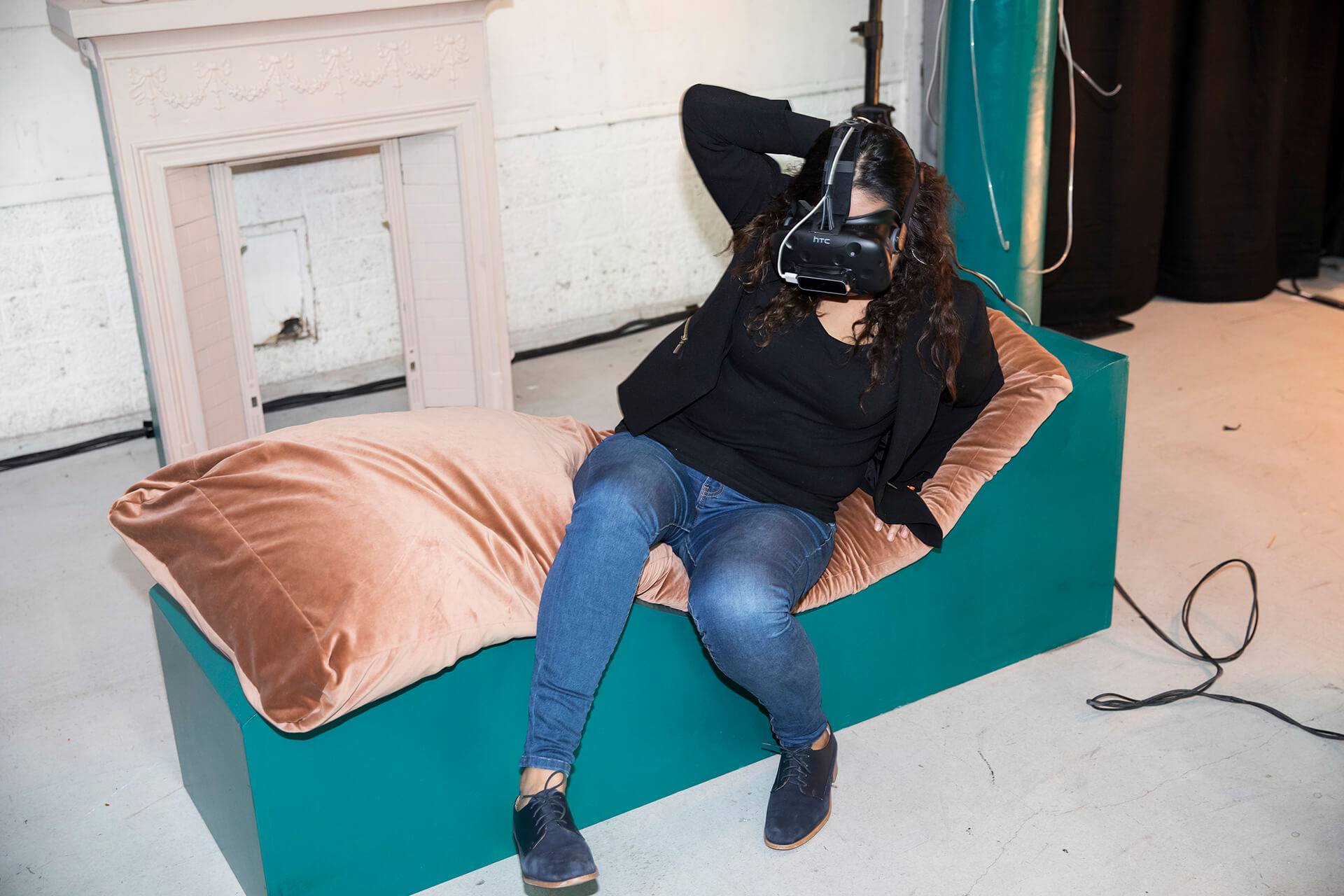 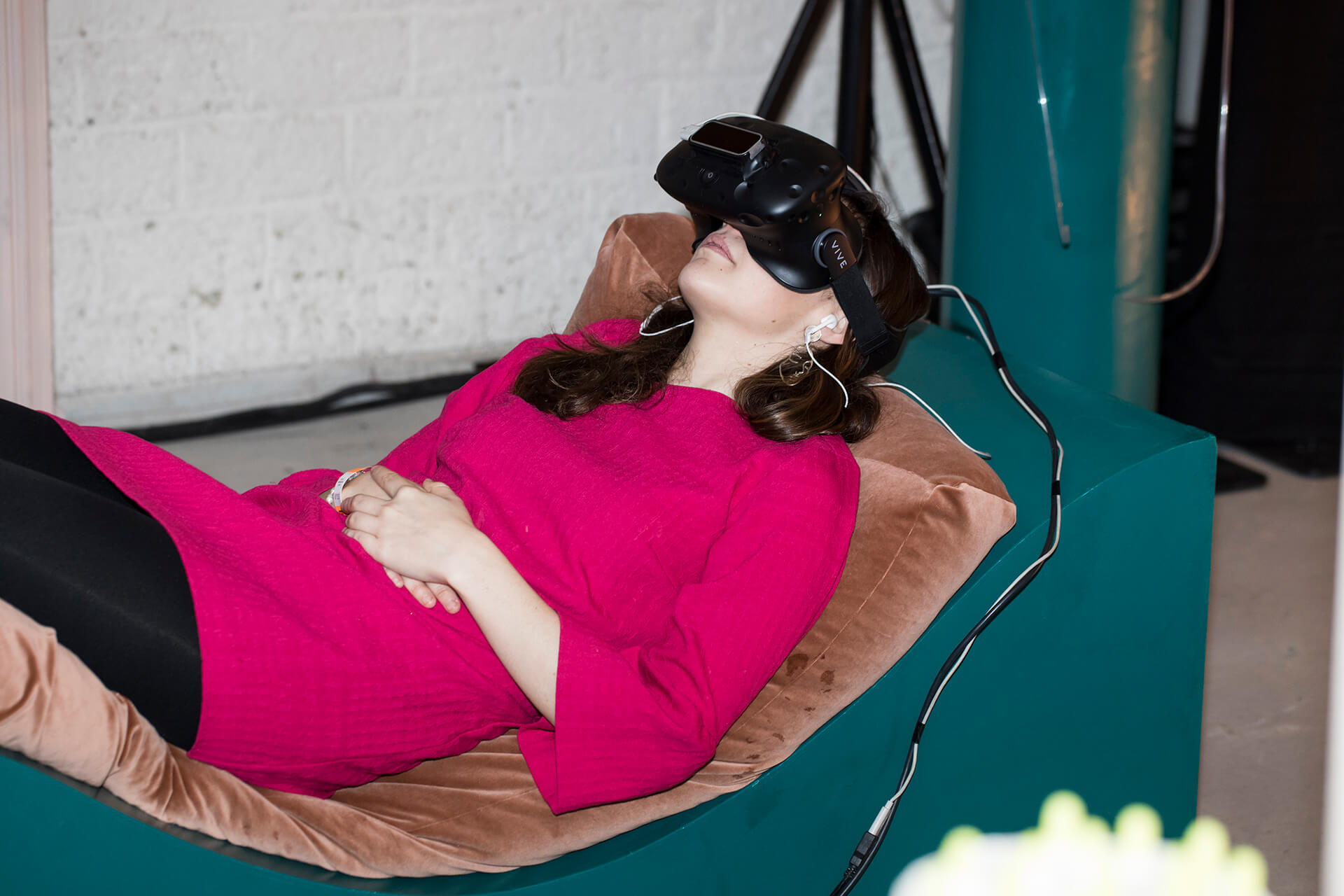 Why, having this particularly complex landscape, did you choose a private space as the base of Micro-Utopia as opposed to something more public?
I often ask myself how to react as a designer to the radically changing landscape of domesticity that is gradually turning our most private realm inside-out. Within the present urban condition, the desire to have a space of one’s own stands for many of my generation on equal terms with the right of self-determination and autonomy. The unprecedented globalised labour market and our consequent state of mobility, paired with the chronic failure of successive governments to provide access to stable, affordable and secure housing in urban metropolises, has created within my generation a deep longing to belong. So Micro-Utopia is my attempt to create a space of one's own within an infinitely shared infrastructure.

What do you consider the highest barrier of critical-mass adoption for VR?
VR experiences are often associated with isolation, given that they can rarely be shared and are often difficult to communicate fully outside of the experience. There is a huge potential for researching and developing social interaction within a shared VR space, where the viewers can become productive and communicate with another’s presence in multiple ways, especially through more intuitive and intangible means.

For many, VR is understood as a visual technology that is only perceived through a head-mounted display. To us, this is only its current manifestation. Virtual Reality is an alternate spatial experience beyond our physical world, regardless of the technology used to access it today. The technology is already moving faster than us. Instead of worrying about it, I think it’s necessary to create critical content to contribute to public discourse and conversations about our speculative futures. It's an incredible chance for everybody to start shaping it. 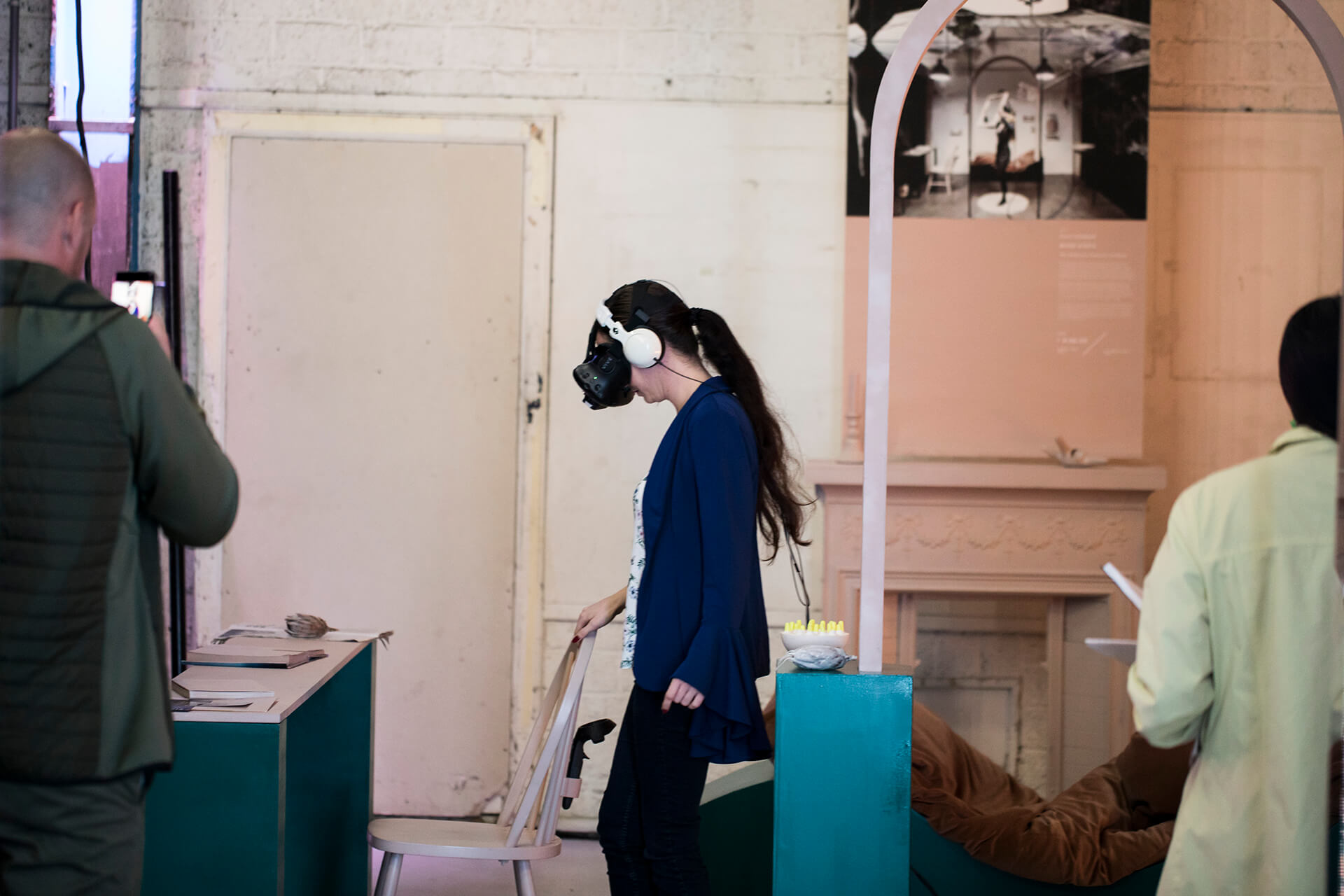 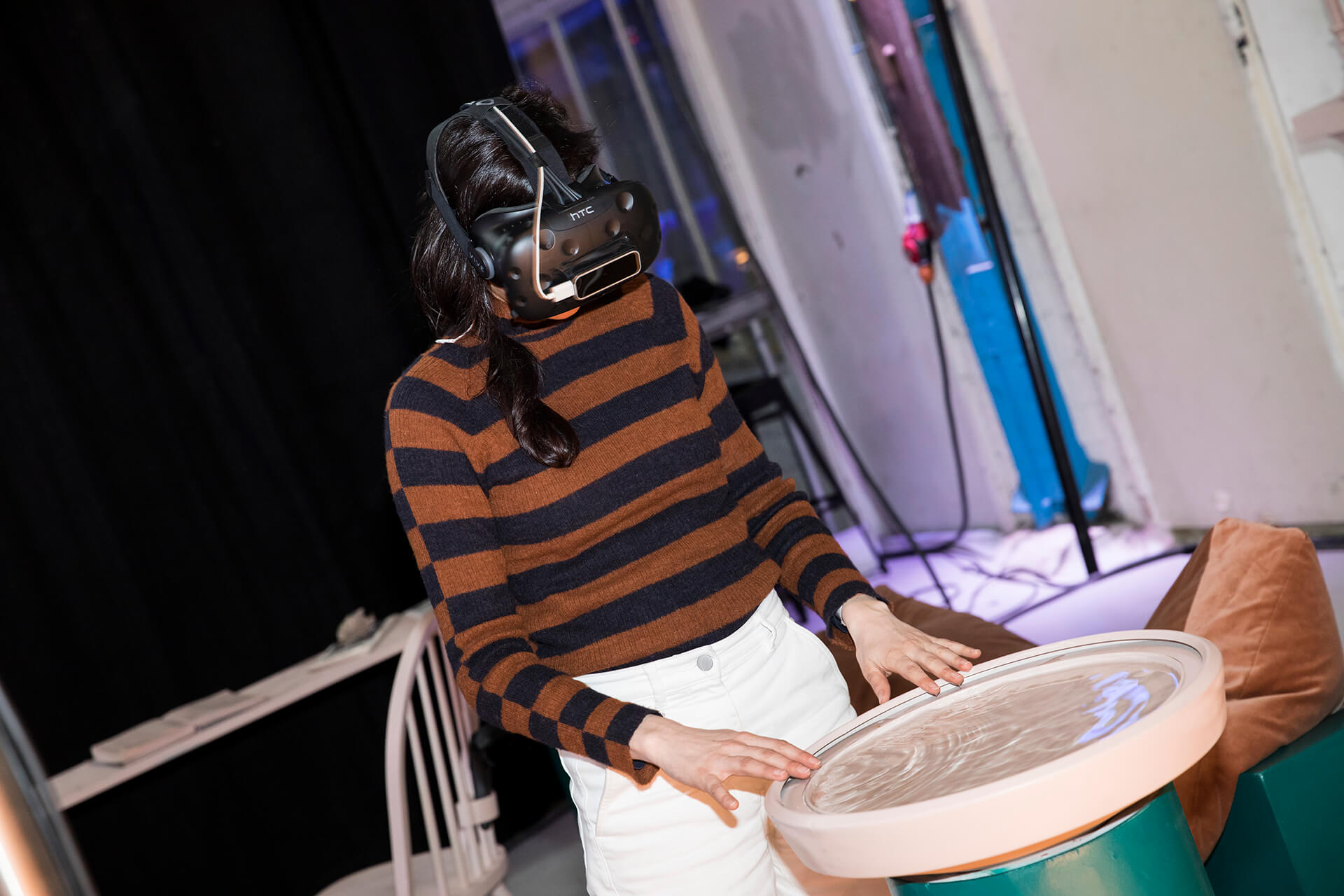 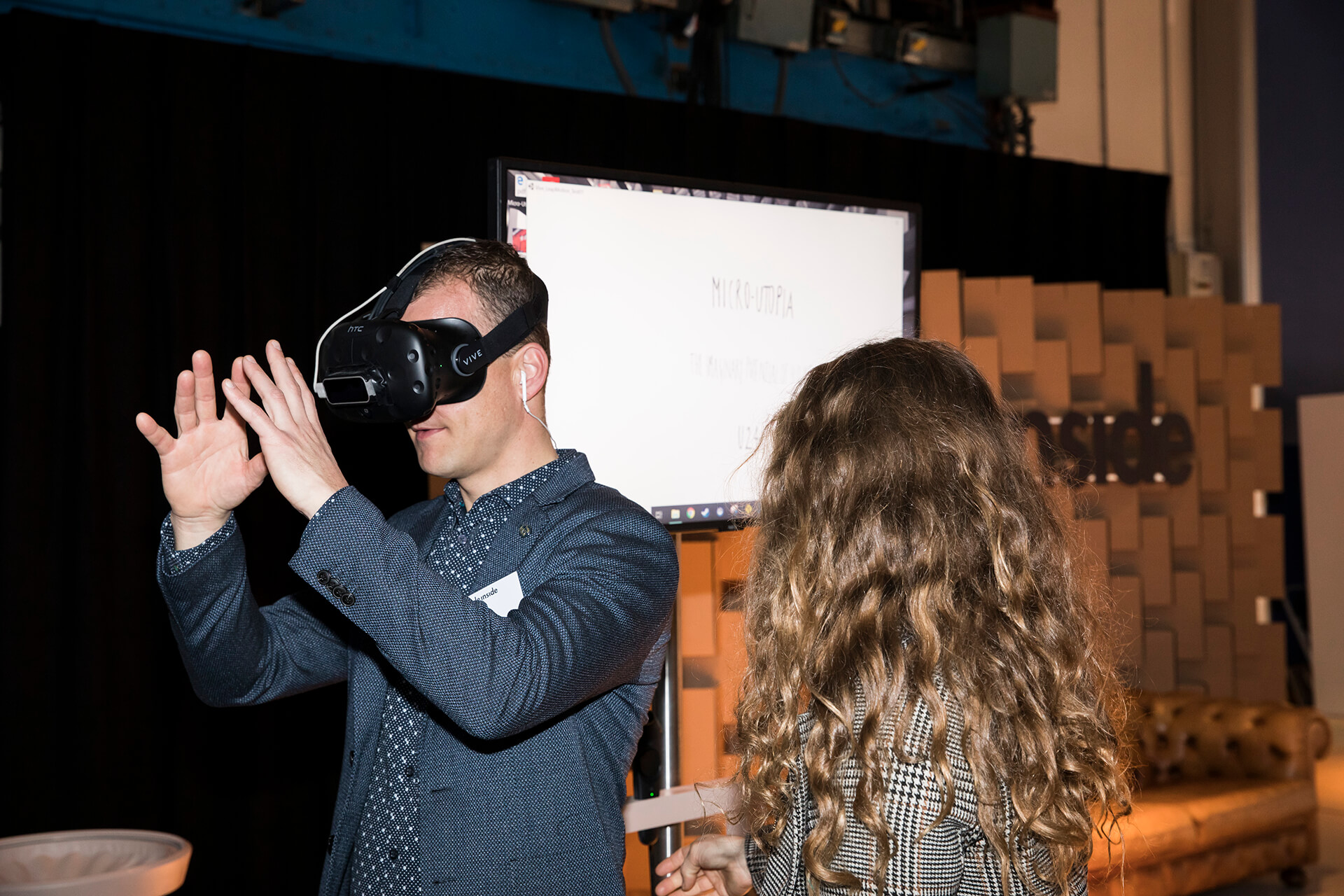 What if the new virtual workspace was an environment you could trust?

So, given that chance, which spaces are we currently not thinking of when it comes to VR compatibility?
I prefer not to think about the spaces that already exist, but imagine speculative environments that resonate with our dreams, memories and emotional spaces. What if, for example, the new virtual workspace was an environment you could trust? Would it react to your habits and emotions to ultimately construct a space that is always stocked and prepared to support you, regardless of physical location? What if it were a space with the ability to intrinsically teach new skills through independent work carried out within? Or maybe even a new home for craft? Can emotional value and a sense of ethical provenance be added to the creation of virtual assets?