The newest Rimowa store is almost good – and believe me, that’s a compliment

Sometimes, one of your project pitches sent to the Frame editorial inbox touches the core of one of our editors, and case-study pieces turn into op-eds. This is one of those times.

In March of last year, luxury suitcase brand Rimowa cancelled every dealer contract, in order to homogenise its physical retail standards across the globe – here in the Netherlands, for example, 27 retailers were cut from the list. That was one of LVMH’s most radical sales-oriented decisions since taking over the brand in late 2016.

So, as the company’s new retail concepts have come to life in places like Ginza 7, Rodeo Drive and now the Berlin flagship, I’ve waited to see what the fuss was all about.

I am still waiting. But mind you, this is not an entirely negative position. 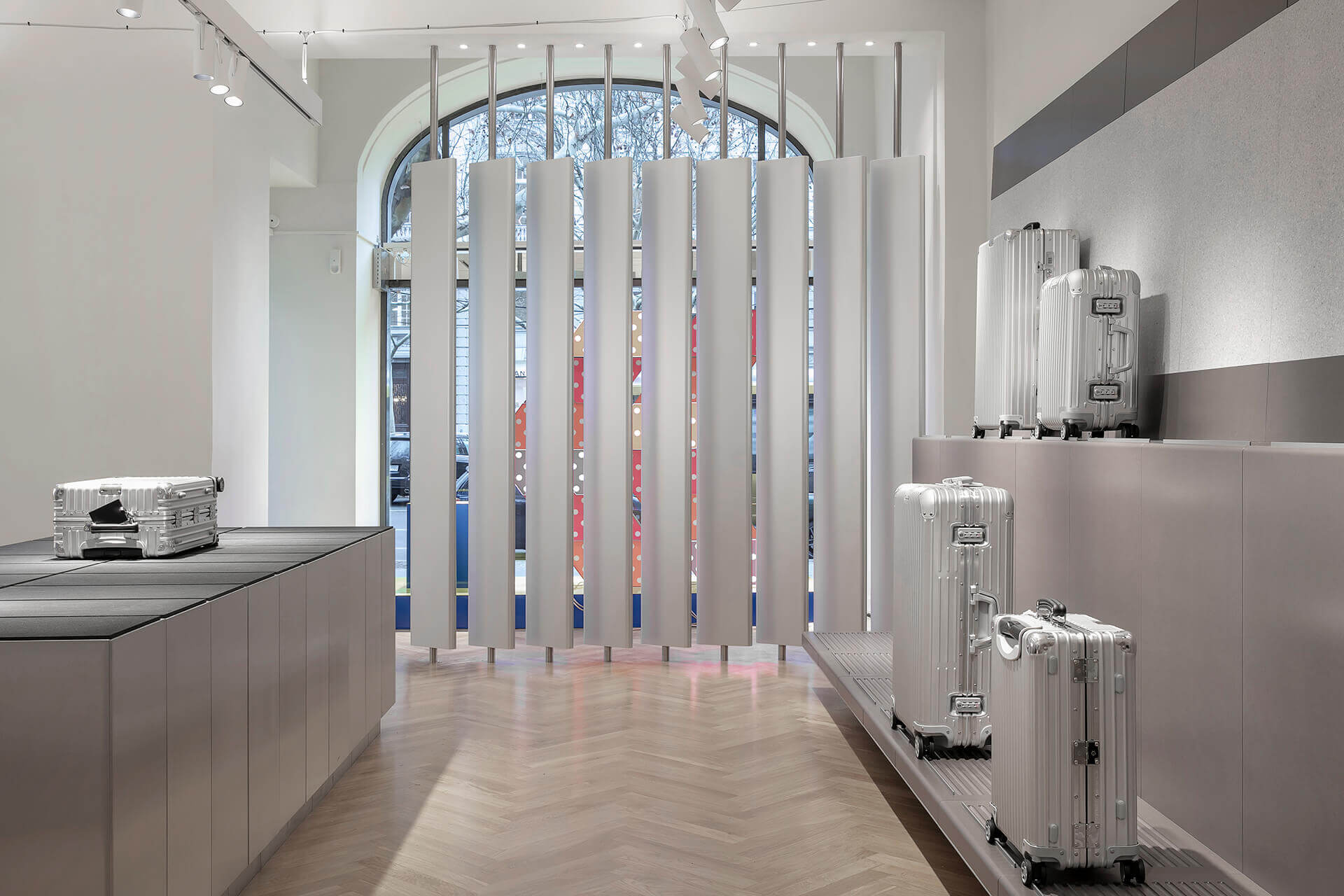 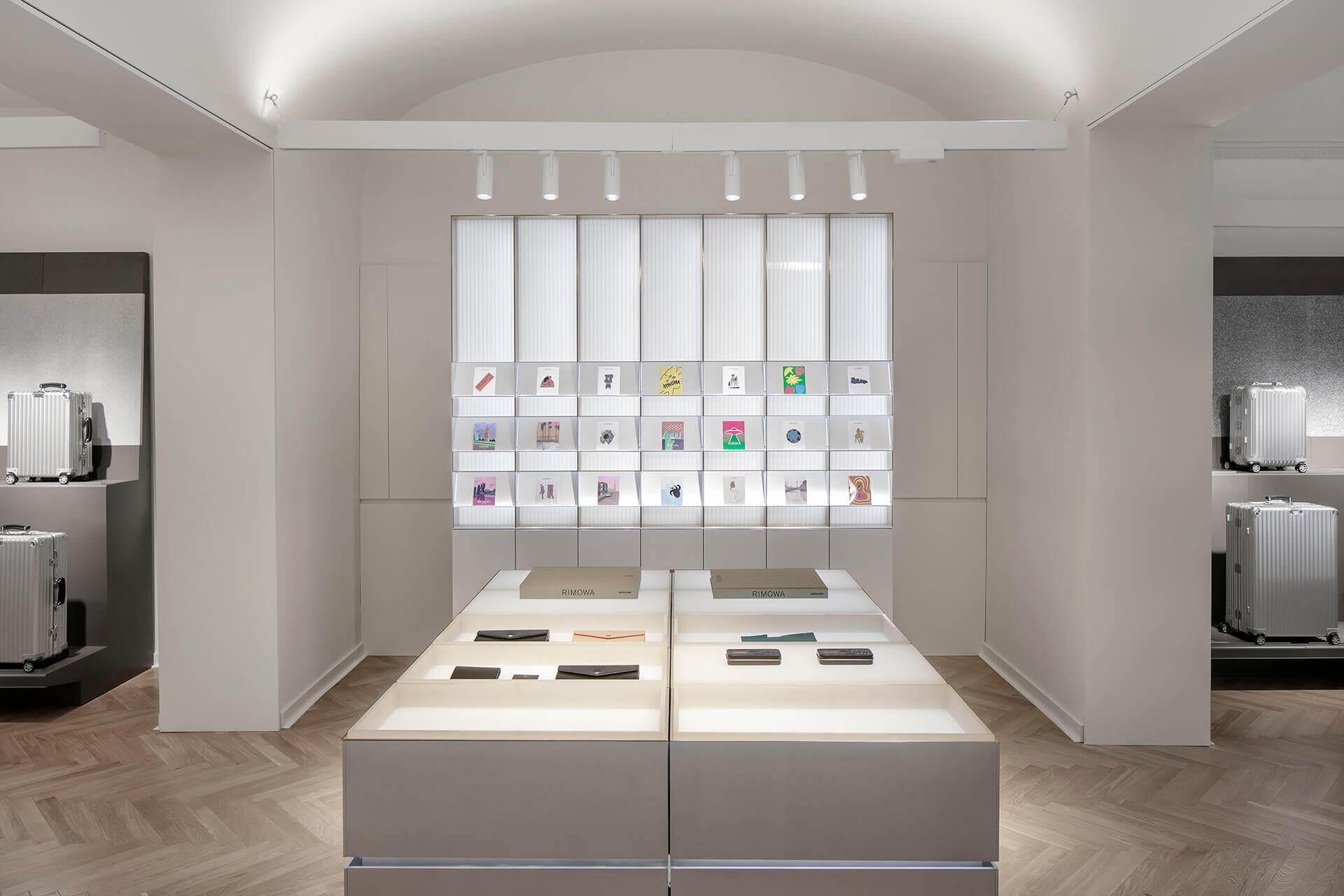 Before Alexandre Arnault became the CEO of the German manufacturer, it was mostly favoured by precious parents or by film crews with precious equipment. It was the Céline Dion of suitcases: pleasing and likeable in a traditionally elegant way. Modest, yet extremely high-quality. Dependable, strong and unbeatable – a Rimowa aluminium suitcase could strike an iceberg and its heart would still go on. But after her lifetime partner and manager passed away, the previously underlying Dionaissance came out in full force. To the casual fan, it appeared that out of nowhere she was serving unfettered extravagance in Paris to the lens of Vogue Videographer Von Steiner. Being genuinely called adventurous. Becoming a #mood by crying at the recent Valentino show. Through her sustained quality and hard work, your gran’s favourite 50-year-old songstress has earned the right to live her best sassy life. Mariah could never.

As a Rimowa consumer from pre-Arnault times, I initially mourned its transition from a reserved quality signaler to yet-another-Hadid-peddled thing – there’s nothing like attaching an Instamodel to a respected brand in order to dilute its patrician worth. I gasped at the logo-heavy Fendi partnership – the suitcase’s original logo-shy design passed relatively unnoticed to all but those in the know. I did my best Chrissy-Teigen-at-the-Golden-Globes impression when I saw that other “collaboration.” News of the Köln Travel Kit, an Aesop toiletry bag, made me think that I had had too much internet for the day. I don’t want to talk about the red one. But then came the Olafur Eliasson stickers, meant to increase awareness of the impact of the Anthropocene by attaching them to the object most associated with travel, a rather carbon-intensive activity.

That’s when it became clear: this was high-level straight-faced trolling mixed with neo-luxury earnestness. Horizon Studios could never. Away and its Rashida pink could never. Globe-Trotter and its cute Chufy deal won’t ever. Through its sustained reputation for engineering quality, Rimowa has earned the right to live its best sassy life. Now that I’ve seen the light, I can’t get enough of Arnault’s subtle wickedness. A few days ago, after the most recent Louis Vuitton show in Paris, he posted a photo of Virgil Abloh’s light-up-in-the-dark LV bag with a joke about perhaps doing the same for Rimowa. I wholeheartedly smiled… and then I let out a sigh of disappointment after realizing he wasn’t going to be pushing out those clown bags next. That would have been lit.

On the client side, there’s a schizophrenic dissonance between the product’s new soul and the retail space it inhabits

Which explains my other disappointment regarding the new Berlin store, designed by Universal Design Studio. Meant to emulate the look of  the brand’s core range, the space features theatrically large aluminium elements with signature grooves that pull double duty as display spots. As this new retail strategy is inspired by their Never Still brand motto, shopkeepers can guide customers through a customization process walking along three rooms, called Immerse, Pause and Arrive. In other words, the brief the studio received was beautifully fulfilled. ‘It entailed creating a physical experience inspired by the brand’s legacy in craftsmanship and engineering, whilst embracing a new generation of customers and re-thinking what traveling means in the 21st century,’ explained UDS co-director Hannah Carter Owens. As an execution of that request, it is a perfectly decent example of a retail space that is pleasing and likeable in a traditionally elegant way. Modest, yet extremely high-quality.

And yet, on the client side, there’s a schizophrenic dissonance between the product’s new soul and the retail space it inhabits. Those stores seem to be made at best for both the old and the new Rimowa consumer, which means it's for nobody at all. The sole Google review on the new Berlin location, from a seemingly life-long consumer, states that 'for me the holy bond with Rimowa ends with the abandoning of the Witt family business. I will look for other similar products now. No extra value in Rimowa left.' Yesterday, after the predictable arrival of the iPhone cover case, I joked that the brand was going to capitalise on 90s nostalgia by dropping a special set made up of a purple Check-in L with a tiny Essential Lite in red in honour of the Tinky Winky Teletubby. Some of my colleagues here at Frame weren't sure whether I was being serious. That's what people have come to expect of the brand today  – just look at this LV-Ablohmowa turducken.

Consider this: earlier today we ran a piece on Demna Gvasalia’s casino carpeting at the new Balenciaga store in Milan. Streetwear-luxe is reportedly getting close to belting its swan song, but the Georgian designer is still trying it with some Bellagio-inspired spatial clowning. It’s funny and fun but ultimately misguided, mainly because cynical realism can only go so far. Gvasalia can’t back it up with some self-conscious respect for consumer pockets or, when in Vegas, with some Venturi-like earnestness. That’s the type of combination one would expect to see emanating from Rimowa Redux, an iteration that seems to be quietly lamenting the fact that it didn’t get the chance to do the IKEA-luxe tote bag right. 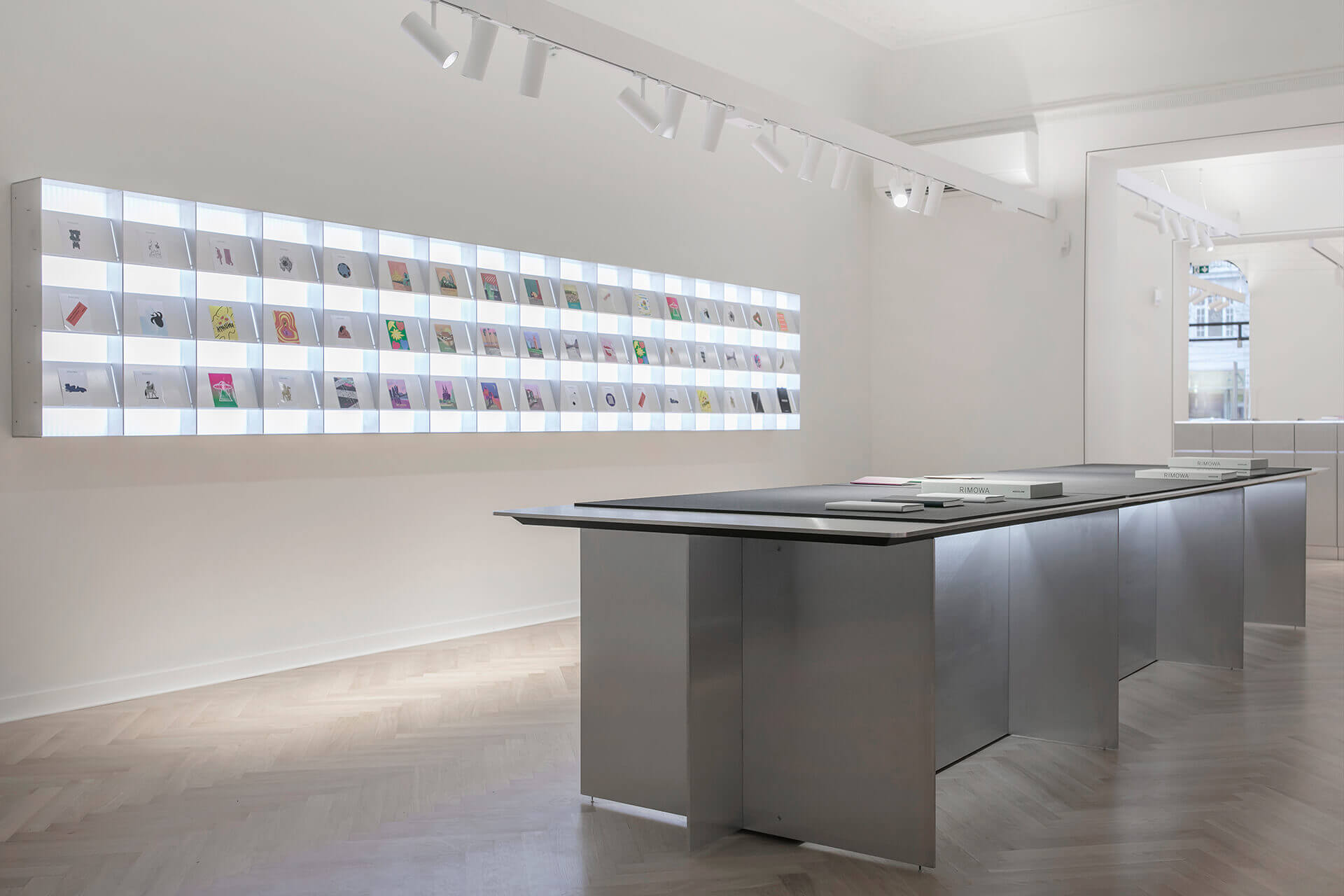 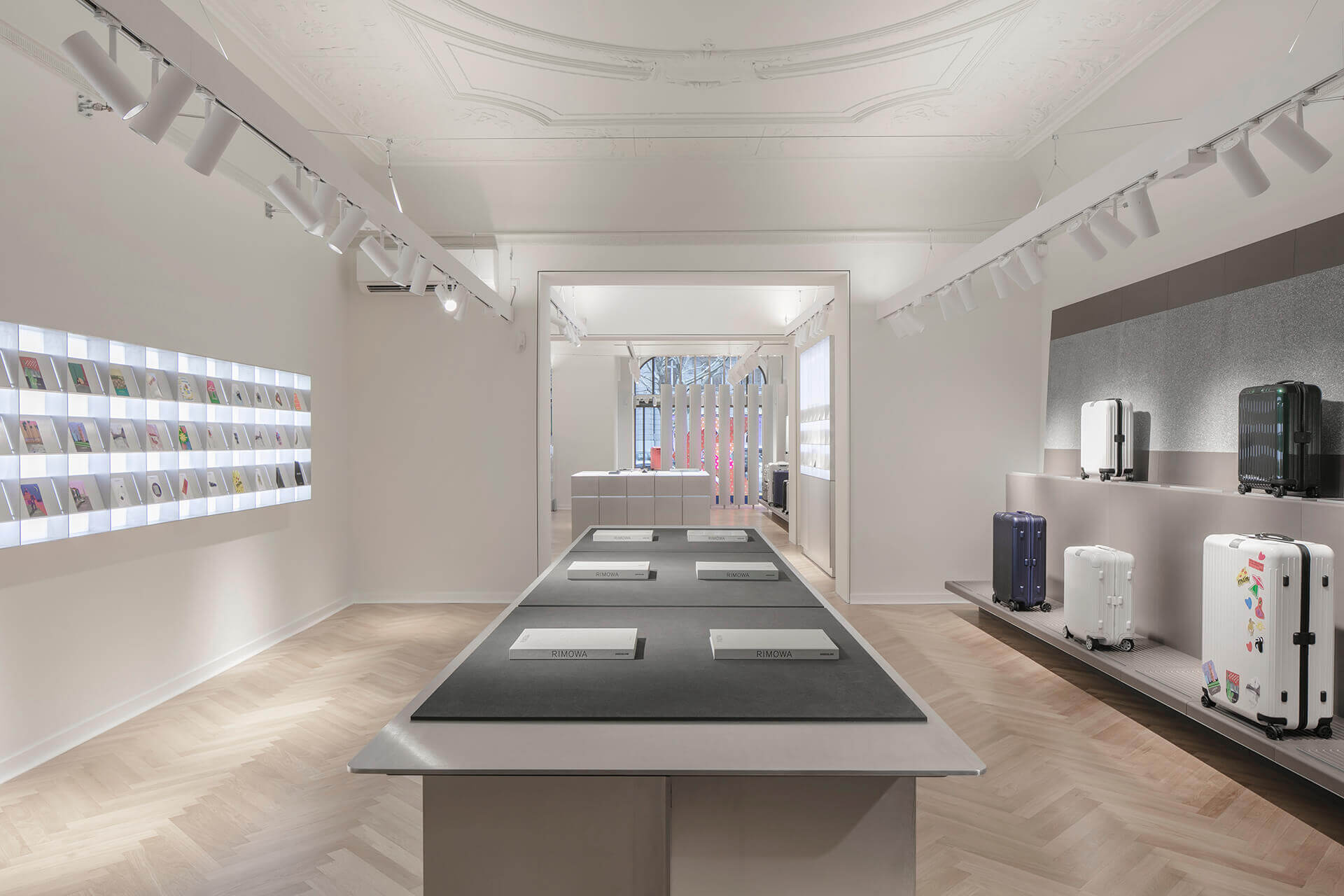 Indeed, Arnault’s Rimowa seems to be joyfully savage, and the world is understandably embracing the way he has reinvigorated that other four-wheel luxury product – in barely two years the brand has seized the millennial fascination with travel and accessory rotation to spearhead a gold rush in the creatively stagnant category. But as many large luxury purveyors face the challenge of eliciting durable excitement within their physical outlets, this would be a great opportunity for a true retail Rimowassance. For the past five years, many stores have focused on making their consumers look hip by providing photo-friendly setups. But I am saying this in the middle of a pendulum swing: as tension of all kinds has become a part of every commercial transaction today, blessed be the brand that can make its consumers smile with joy first. So by all means: be more Neymar, less Roger Federer. Let your retail spaces live up to the cheeky extravagance that your product development team is now known for. Surprise us. Too many luxury brands leave us underwhelmed or simply whelmed with their store translations. So go ahead, because you’ve certainly earned it: overwhelm us with your shops.

As much as we want to downplay their importance, consumer objects and the spaces they’re attached to speak louder about our self-image than a mirror ever can

That doesn’t mean I’ll be visiting one anytime soon – I’ve given up as a purchasing consumer, instead choosing to sporadically consume the brand’s product development news as entertainment. As part of the aspirational-for-whom cycle, modern discerning shoppers usually change their essential tools if they become overexposed – LVMH has indeed been a victim of its own success before with the Louis Vuitton three-second-bag, a nickname it earned for the amount of time it takes to see one on the street.

As much as we want to downplay their importance, consumer objects and the spaces they’re attached to speak louder about our self-image than a mirror ever can. That’s why, when a beloved brand switches gears, it hurts like a breakup. But then again, as the saying goes: if you love a suitcase, let it go.