COLOGNE - Frame magazine collaborates with biennial event IMM LivingKitchen for its inaugural KitchenLab. Curated by Frame, the new exhibition – which explores the production, processing and consumption of food – showcases innovate ideas from 14 Dutch designers. The likes of Studio Makkink & Bey, Sabine Marcelis and Juliette Warmenhoven will share their visions for the future of edibles in an eye-catching pavilion.

Hand-picked for the occasion, the participants will offer their perspectives on how a kitchen could look if food becomes a self-sufficient affair – something even city-dwellers can achieve. While sharing their views on such agenda-setting topics, the designers will highlight how innovation and aesthetics can work in tandem. 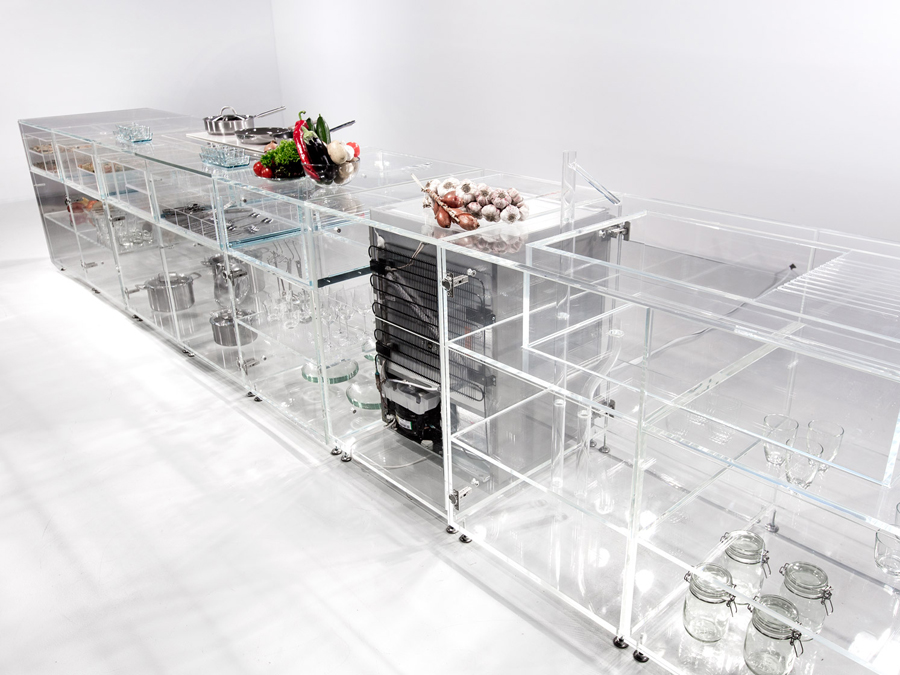 MVRDV’s Infinity Kitchen aims to improve cuisine by making the processes that occur within it quite literally transparent. Originally launched at the Venice Biennale, the project addresses everything from what foods we choose to how much we have hidden away. And, perhaps more importantly in this day and age, how much waste we’re creating. Despite its deeper relevance, Infinity Kitchen also celebrates the act of cooking.

Wenchian Shi will discuss MVRDV’s Infinity Kitchen at one of the events during Frame’s KitchenLab
www.mvrdv.nl 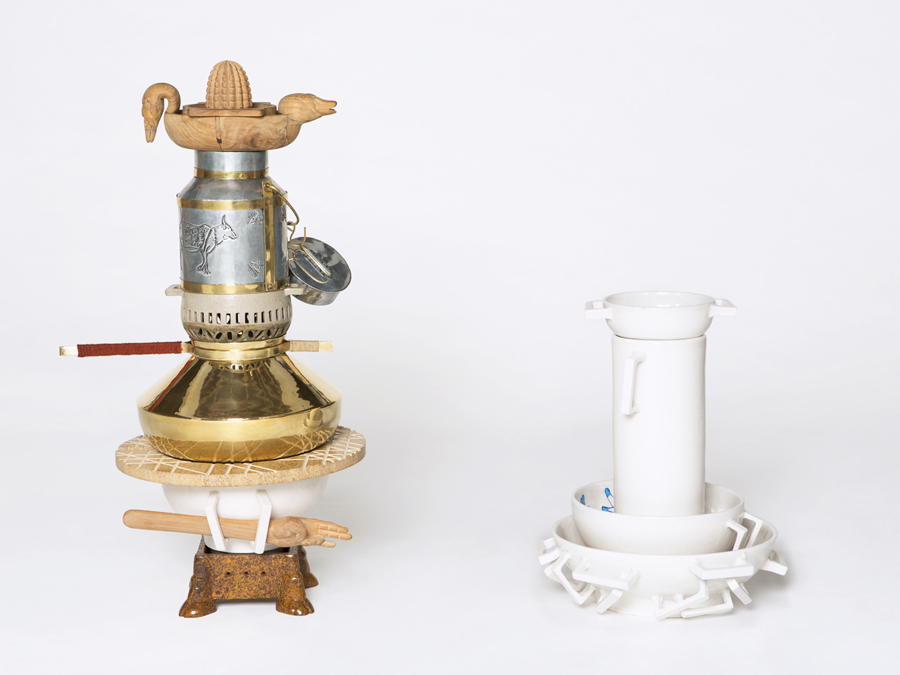 Studio Makkink & Bey merges design, education and craft from the Netherlands and India in Cheese Maker. The project comprises a stack of objects to make cheese at home: a juicer, milk jug, spoon, cheesecloth and colander in various materials such as wood and ceramic. Inspired by the surprising similarities in the cheese-making traditions of both countries and the history of ceramic craftsmanship, the duo builds on themes of knowledge transfer and education in the work.

Something Sweet by Tessa Geuze 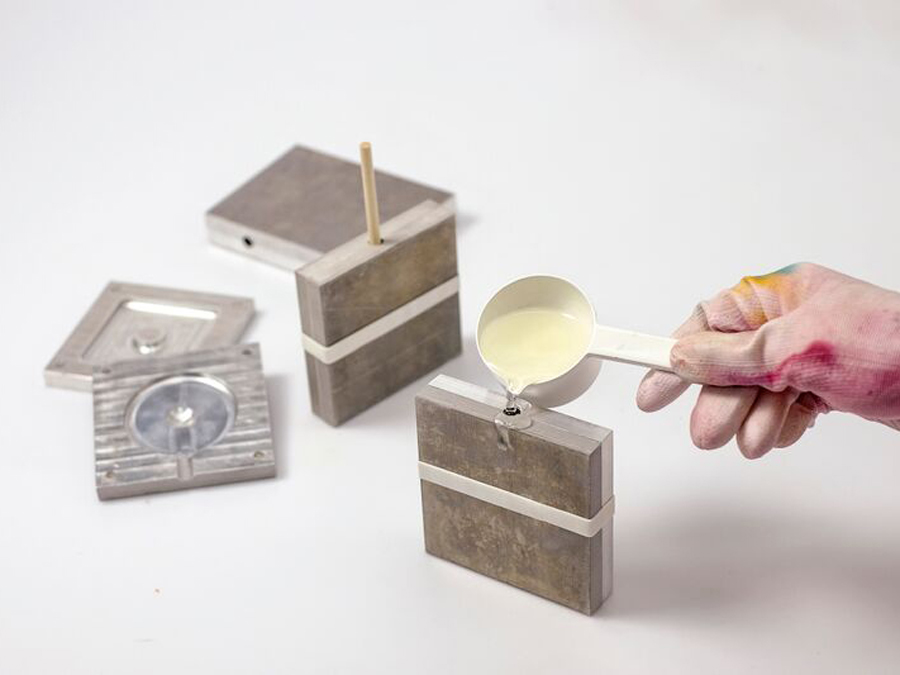 Tessa Geuze wants to challenge our modern relationship with candy by harking back to the golden days of sweets. In line with Geuze’s overarching approach of interrogating how we relate to the products surrounding us, the miniature confectionary kit provides tools, moulds and storage to inspire people to get outdoors, find fresh ingredients and make their own seasonal sweets by hand. The designer seeks to salvage the artisan method of producing candy – and the lost art of enjoying it as a luxury. 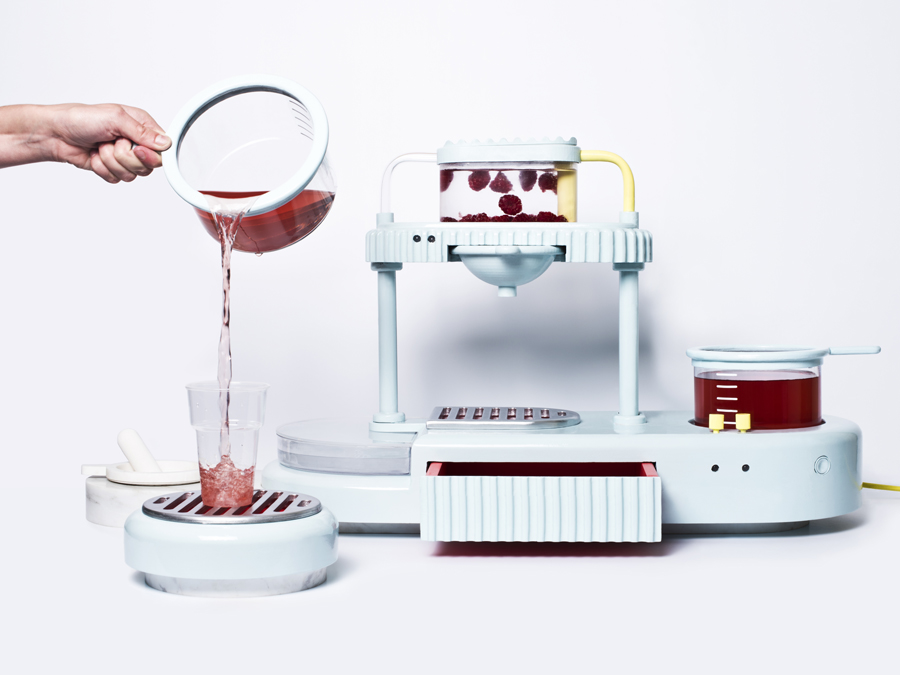 Renske Rothuizen works with childlike wonder and curiosity to forge a fusion of sophistication and playful design. Inspired by the classic children’s tales of Pippi Longstocking, Lemonade Factory is a gadget that presents the whimsical delight of making lemonade in a practical and visual way. Although it looks like something more suited to a science lab, the device is at home in the kitchen, where it transforms the sour yellow fruit into a palatable beverage. 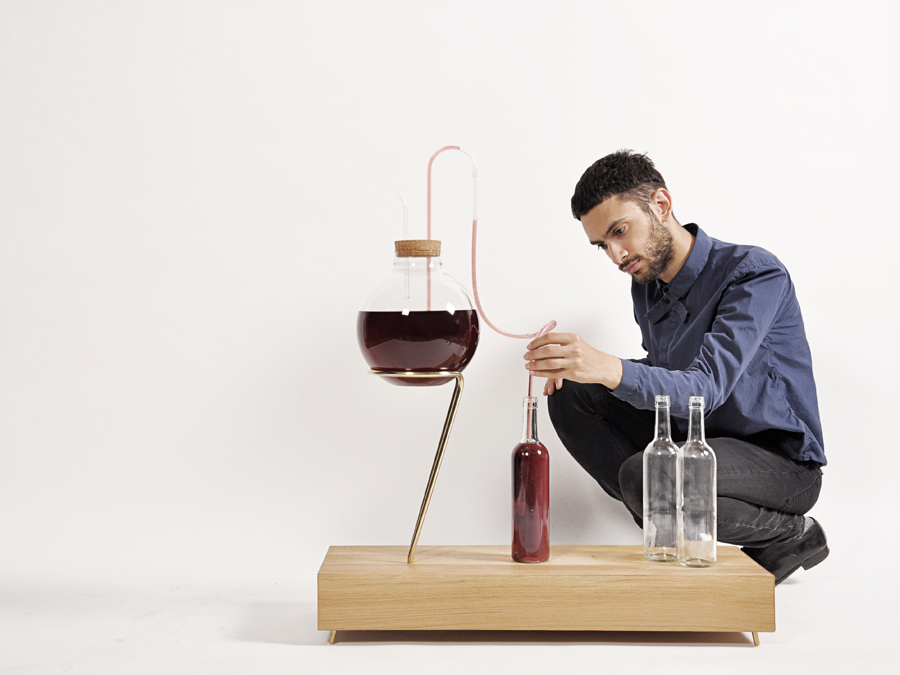 We tend to revere the end product of winemaking without giving much thought to the process behind it. In a residential situation, winemaking is often relegated to garages or basements. With House Wine, designer Sabine Marcelis created an all-in-one home-brew installation to bring the process into the living space. House Wine brings nurturing, care – and a sense of calm – to winemaking. 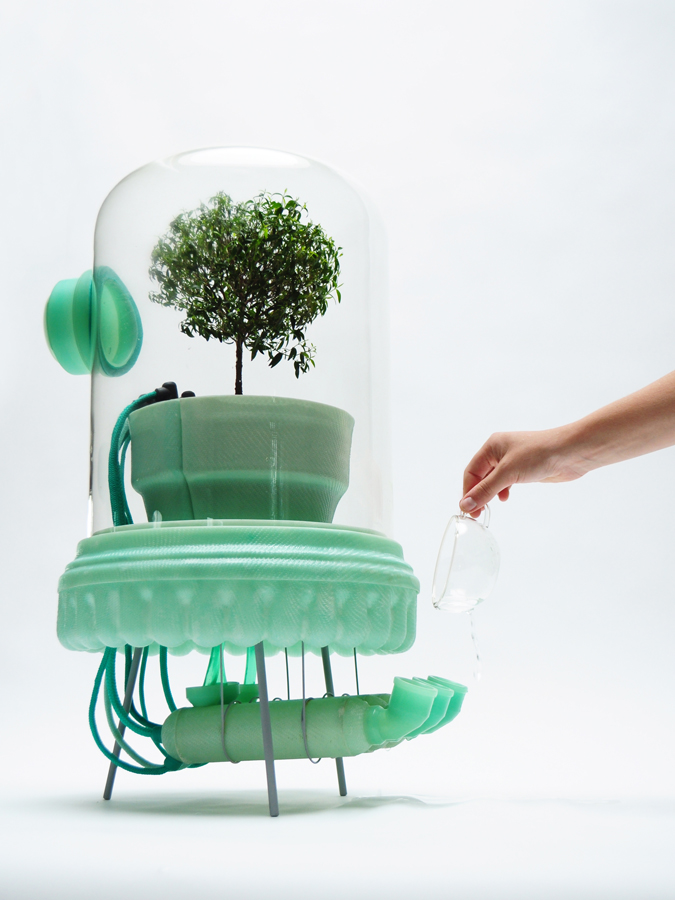 Juliette Warmenhoven grew up in the Netherlands’ so-called ‘bulb district’, where her father was a flower farmer. Inspired by the industrialization of tulip production in her homeland, Warmenhoven developed a series of small botanical monuments that pay tribute to the humble and imperfect beginnings of plants. Everyday Growing features miniature plants in strange and interesting vessels – such as a bonsai incubator, plant-cuttings holding tank, water-supply device and music box – which are all handmade by Warmenhoven. The designer explores the tension between the natural and artificial worlds by dissecting both. 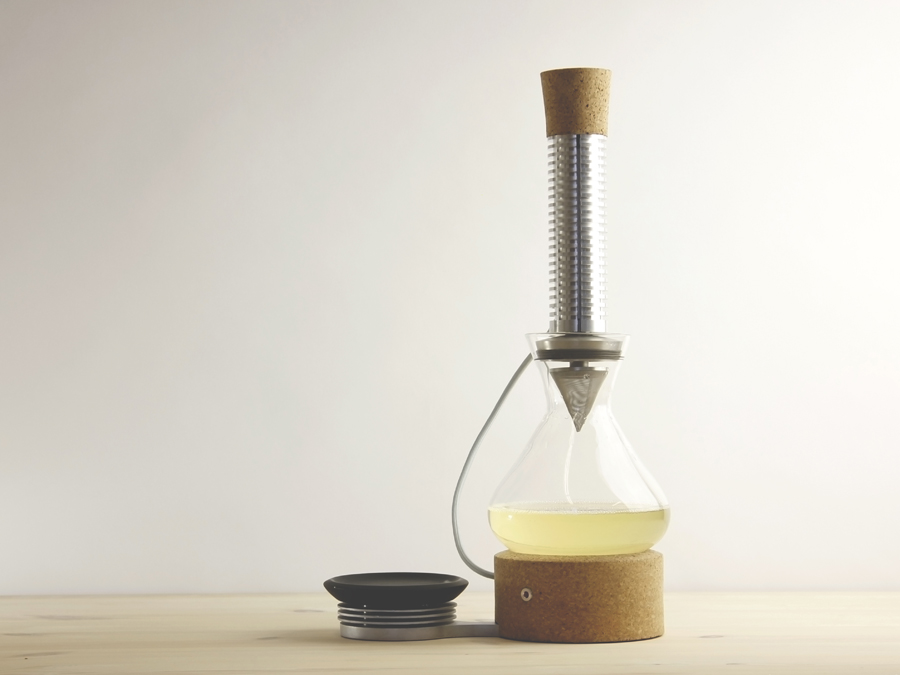 Hailing from a family of home brewers, Roald Sooijs shifts from beer to spirits with Ginly. The designer developed a botanical vapour infuser as a workaround for the distillation of spirits like gin without a professional permit. The infuser enriches any spirit with crisp flavours of herbs, fruit or vegetables.

All you need to do is fill the basket with the aromatics, pour in some vodka and hit the start button to initiate the infusion. 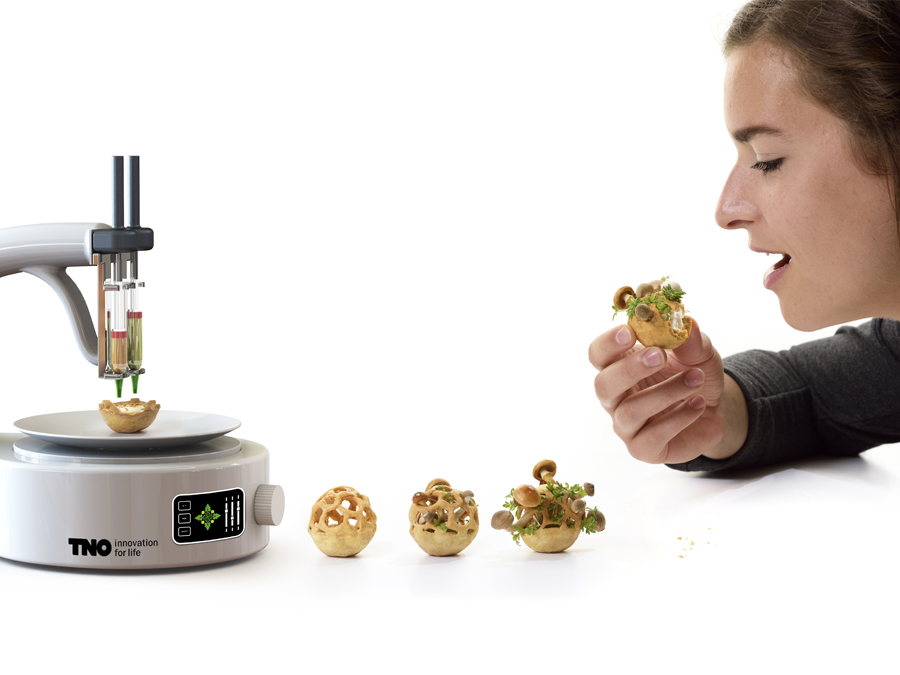 Chloé Rutzerveld’s Edible Growth merges new technologies and authentic practices of growing food. Asking the question of how we can use new technologies to enhance the food production chain and support natural growth, Rutzerveld created a fully edible 3D-printed ecosystem. The designer’s breeding ground supports seeds, spores and yeast, and lets plants and fungi mature. Consumers can decide when to  harvest their fresh, nutrient-rich edibles. The critical project explores how people are concerned about the quality and realness of the food they consume.

Chloé Rutzerveld will present her ideas about food at a cooking event during Frame's KitchenLab
www.chloerutzerveld.com 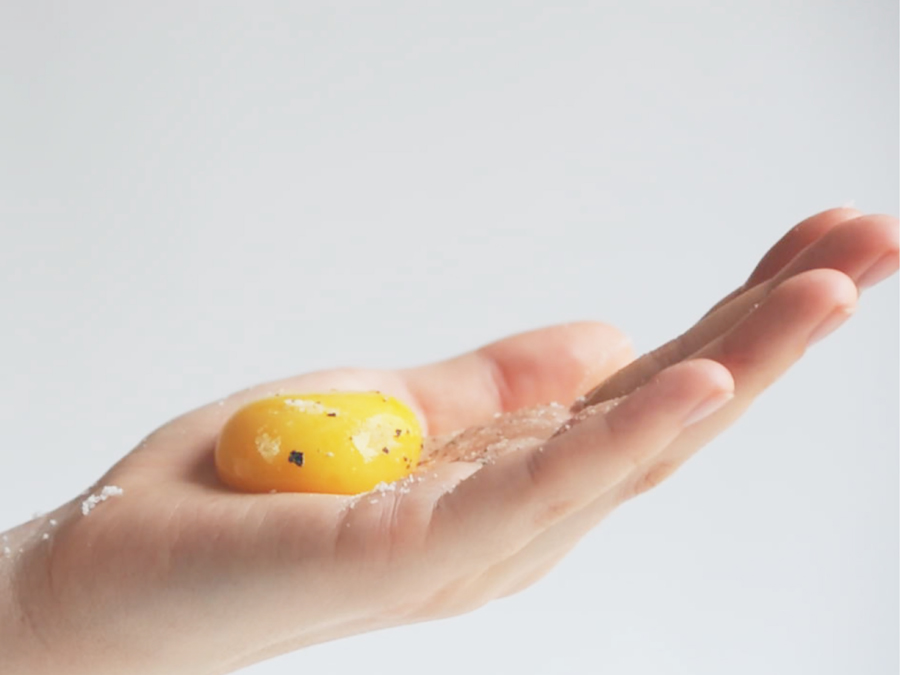 Taste and touch are inextricably intertwined, a connection Giulia Soldati plays with in her project Contatto. Taking a new approach to the materiality of food – its preparation and consumption – Contatto removes unnecessary components in the human-food relationship. The hand itself becomes a surface for food, allowing the action of serving to become an intimate gesture between the toucher and the taster.

Giulia Soldati will demo Contatto during a Trend Talk at Frame's KitchenLab
www.giuliasoldati.com 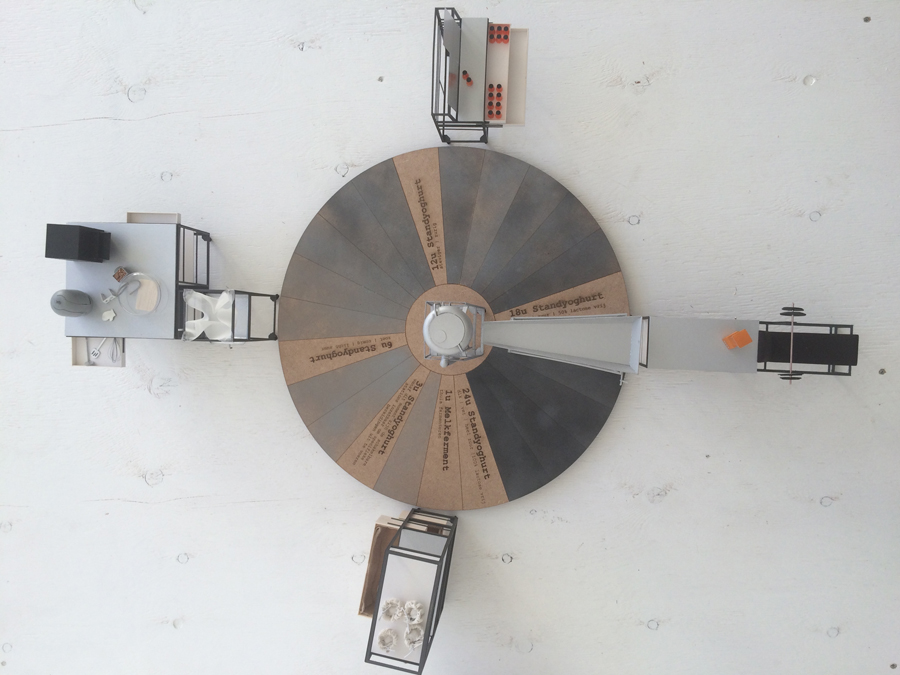 The yoghurt-making process is straightforward: bacteria is added to milk, which breaks down lactose and converts it into lactic acid. After 24 hours, you have yoghurt. But dissecting that process into a 24-hour clock results in other possibilities along the way. Stopping fermentation earlier results in such products as whey shakes, yoghurt-based cosmetic products and yoghurt flakes. Foodcurators began Yoghurt Clock as an independent research project and is now looking for possibilities for the industry together with a dairy producer.

Explore Yoghurt Clock during a tasting and demo at Frame's Kitchen Lab
www.foodcurators.nl 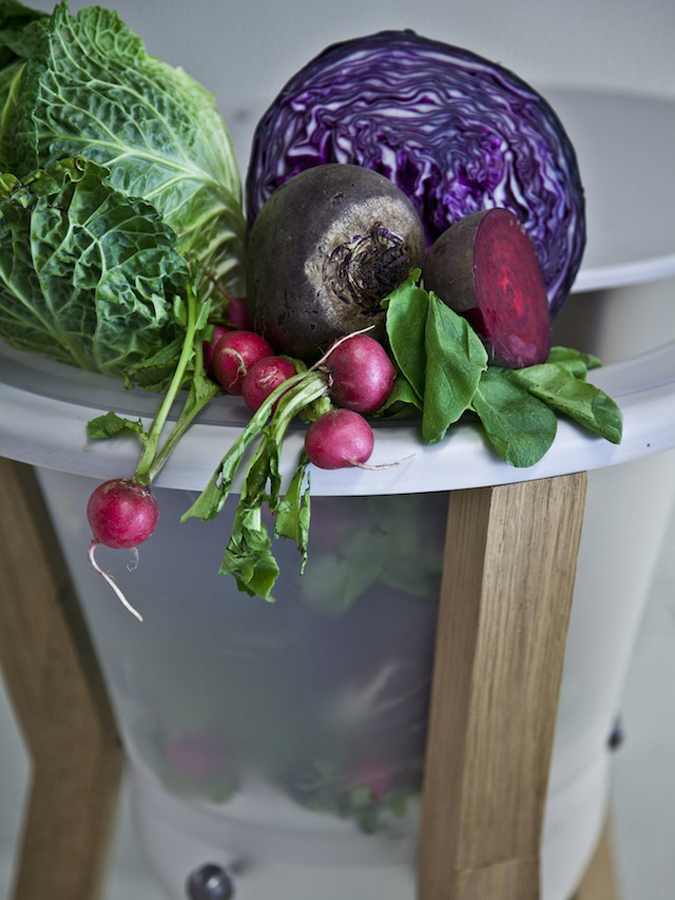 Inspired by her own childhood experiences with kitchen gardens, Naomi Bijlefeld designed a hand-operated processor that removes soil, unwanted leaves and peels from fruit and vegetables before chopping them into pieces. Bijlefeld’s DIY processor prepares the urban gardener’s harvest for immediate use in the kitchen or storage in the freezer. 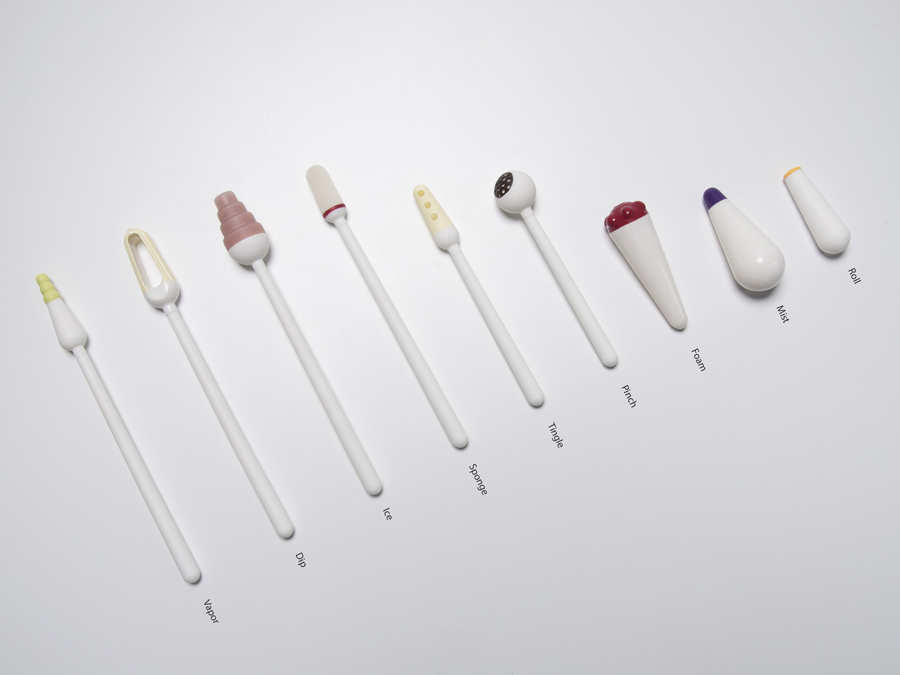 Motivated by the plights of those unable to physically eat, Louise Knoppert devised an alternative way to experience and enjoy food and drinks. Aware of the social aspects surrounding dining, the designer developed a series of tools that reflect a variety of sensations, flavours, emotions, movements and actions. Elements like vapour, foam and mist can be matched to the meals of others at the table, allowing non-eaters to be part of the dining event.

ME by Emma van Eijkeren and MOAK Studio 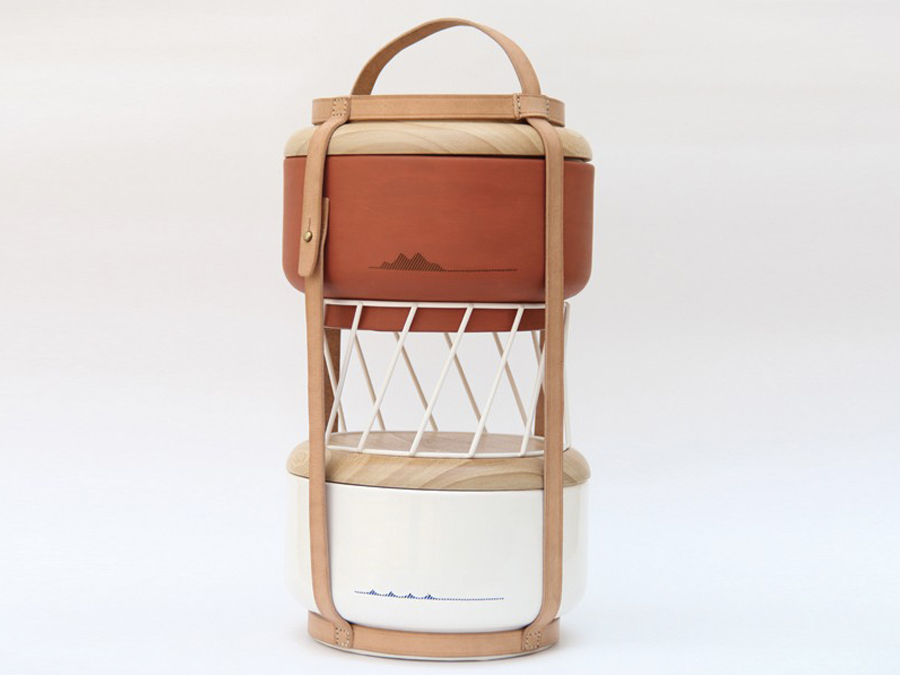 Focusing on portability and flexibility, ME is a set of kitchen equipment than can be assembled into a holdall. A project by Dutch designer Emma van Eijkeren and Colombian MOAK Studio, ME was developed during an exchange programme between the two countries. The partners aimed to create a versatile product that unites families and friends and incites shared meals. ME combines various kitchen appliances into one unit. Each compartment plays a different role, opening up various interpretations for use. Foods can be roasted in the clay bowl, for instance, while the wooden lid doubles as a chopping board.

MTic-design founders Marie-Thérèse Woltering and Bas Sala will present ME and give Trend Talk about design innovation through cultural collaboration at Frame’s KitchenLab
www.mtic-design.nl

The Real Thing by Helmut Smits 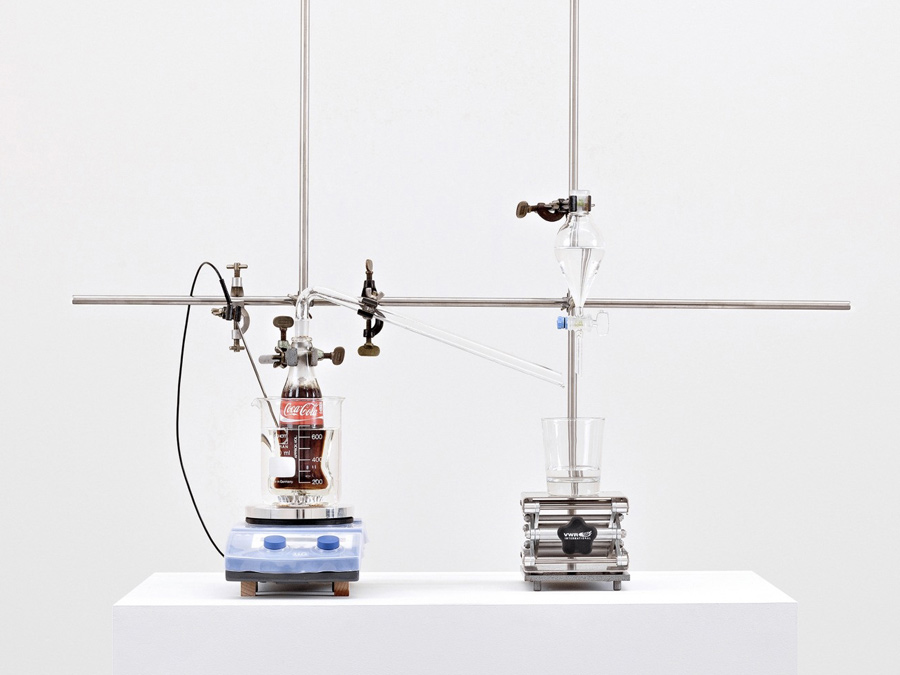 A device by Netherlands-based multidisciplinary artist Helmut Smits, The Real Thing turns Coca-Cola into clean drinking water. Smits’ research revealed that up to nine litres of H2O are used to produce one litre of Coca-Cola – a fact he describes as ‘absurd’. The artist notes the soft drink’s resemblance to dirty brown water. It therefore seemed fitting to filter it, like waste water, back into clean drinking water. Minerals are added at the end of the process to ensure its potability. In a world in which the soda pop is often easier to come by than safe tap water, Smits hopes his installation will incite reflection on how humans impact the surrounding environment.

KitchenLab 2017 is a collaboration between Frame and Creative Holland: an initiative to empower the Dutch Creative Industries.