COS x Studio Swine play with the philosophy of bubbles

In a darkened cinema theatre, a silver metal tree bears fruit. Bubbles bloom and burst, or fall to the ground like mystical pearls.

New Spring is this year’s COS Milan Design Week collaborative installation with an artist or design studio. A few weeks ago, Frame revealed that the 2017 edition would be in partnership with Studio Swine, an artistic collaboration between Japanese architect Azusa Murakami and British artist Alexander Groves.

The studio created an engaging, multisensory experience in the decommissioned theatre Cinema Arti, in central Milan. The installation centres on a modernist sculpture of a lamp-like tree reaching six metres in height and constructed nearly entirely from recycled aluminium. The imposing structure emits mist-filled blossoms that glow from within while still attached to the tree, then fall as round bubble-fruit that burst on contact with skin but that survive when met with textured fabrics, allowing visitors the chance to interact with the installation.

The bubbles represent the fragility of life but also the resilience of nature’s reproductive abilities, blooming from the metal tree, encouraged by modern technology.

New Spring is the successor of Forest of Light by COS x Sou Fujimoto in 2016, which utilized light as a medium for architecture; and Snarkitecture’s work in 2015 using thousands of meters of white ribbon to create an immersive experience for Milan Design Week guests.

Studio Swine drew inspiration from the city of Milan and its significance in art and design history.

‘We were immediately drawn to the Murano chandeliers housed in private Milanese palazzos and, by contrast, the tradition of modernist Italian design – these helped inform the central structure of New Spring,’ says Studio Swine. ‘With a desire to create a communal experience, another key reference for us became Italy’s public fountains, one of the country’s greatest luxuries.’

Studio Swine set out to create a cinematic mood with New Spring in homage to the decommissioned cinema in which the installation resides, drawing upon Kurosawa’s sakura blossom scene in Seven Samurai (1954) and the candelabra scene in Fellini’s Casanova (1976).

New Spring evolves from mid-century cinema to modernist design in its sculptural element, taking cues from the spherical bulbs and sweeping arched lamps of classic Italian lighting. The dark environment surrounding the focal sculpture also refers to the darkness of cinema halls while providing visual contrast. 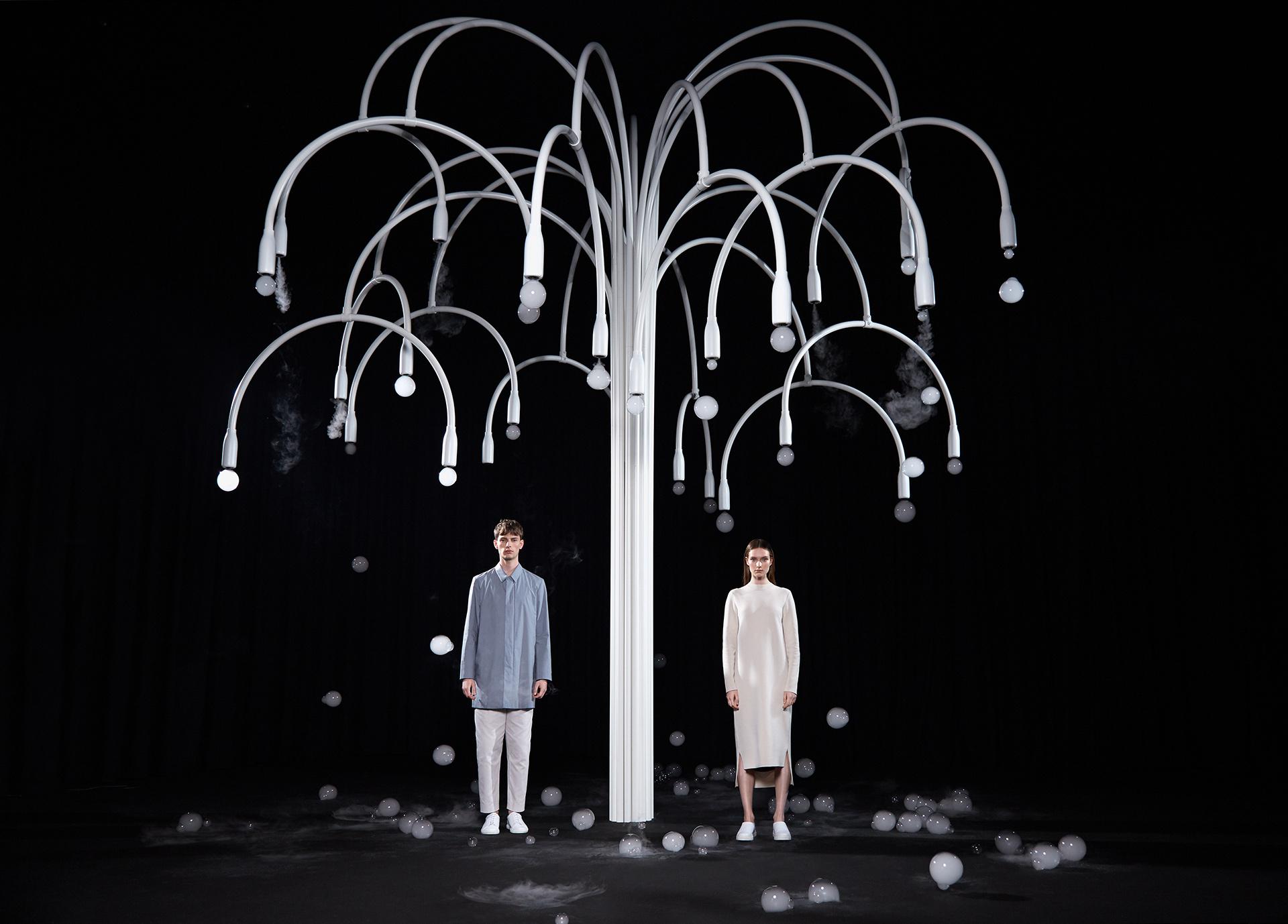 Karin Gustafsson, Creative Director of COS, says ‘I hope that this year’s installation will capture the imagination of those who visit’.