Global conflicts and the resulting worldwide division have not gone unnoticed in the design scene. Neither have they been unaddressed; Brexit triggered a competition to design the new UK passport, the refugee crisis urged two Dutch designers to envision how lifeboats and safety vests could be transformed into backpacks, and Trump’s open call for proposals for the construction of a wall between Mexico and the United States received hundreds of entries, many of which were protests against the president’s plan.

More and more, creatives are entering – and often triggering – discussions regarding socio-political changes. The Jerusalem Design Week organizers are some of these individuals: through this year’s theme ‘Islands’, they address the complexity of a city that has been fragmented into multiple cultural, religious and social factions. Nonetheless, they praise the local environment as a breeding ground for interesting creativity and design – and exhibit work influenced by this complex and divided landscape. These artists set out to transcend borders and initiate collaborations that 'redefine the notions of political, cultural and social barriers' within their environment.

Pictured above is a very topical installation by Israeli designer Rami Tareef and Netherlands-based designer Maurizio Montalti, who created a wall that defies those political leaders who preach division. The installation turns a wall, a symbol of separation, into a mushroom plantation; inviting people to come together and harvest the mushrooms.

Close-up of the wall, a symbol of separation, overgrown with mushrooms. A collaboration between Israeli designer Rami Tareef and Netherlands-based designer Maurizio Montalti.

Visiting a studio such as Magenta Workshop's, where Israelis and Palestinians join forces, shed light on how designers from different ethnic and religious backgrounds can harmoniously work together, despite the alleged separations.

When we spoke to Ran Wolf, managing director of Jerusalem Design Week and the Hansen House – Center for Design, Media and Technology, he elaborated on the role of design in contemporary Jerusalem, as well as its ability to transcend borders. If design can divide, it also has the power to connect – and the exhibitions at Jerusalem Design week were a case in point.

How did you come up with the concept of ‘Islands’ for this year’s Jerusalem Design Week? How does it relate to contemporary Jerusalem?
RAN WOLF: During the last year, many global events have pointed to a new trend of inward movement towards imagined comfort zones, trying to create islands of homogeneity and like-minded people and identities. In this context, we see Jerusalem as created out of a landscape of islands, lying amongst the hills of the city – with its boundaries constantly contested.

Jerusalem’s walls, both ancient and new, hold between them the political, cultural, religious and social issues of the city, but also its diverse and distinct communities. The city was planned and designed to create this separation, islands on top of hills, making Jerusalem the perfect setting for maintaining this type of homogeneity within larger political and social structures. However, we believe that design can also be part of the solution, enhancing our understanding of situations and providing us with innovative solutions and surprising cooperations. 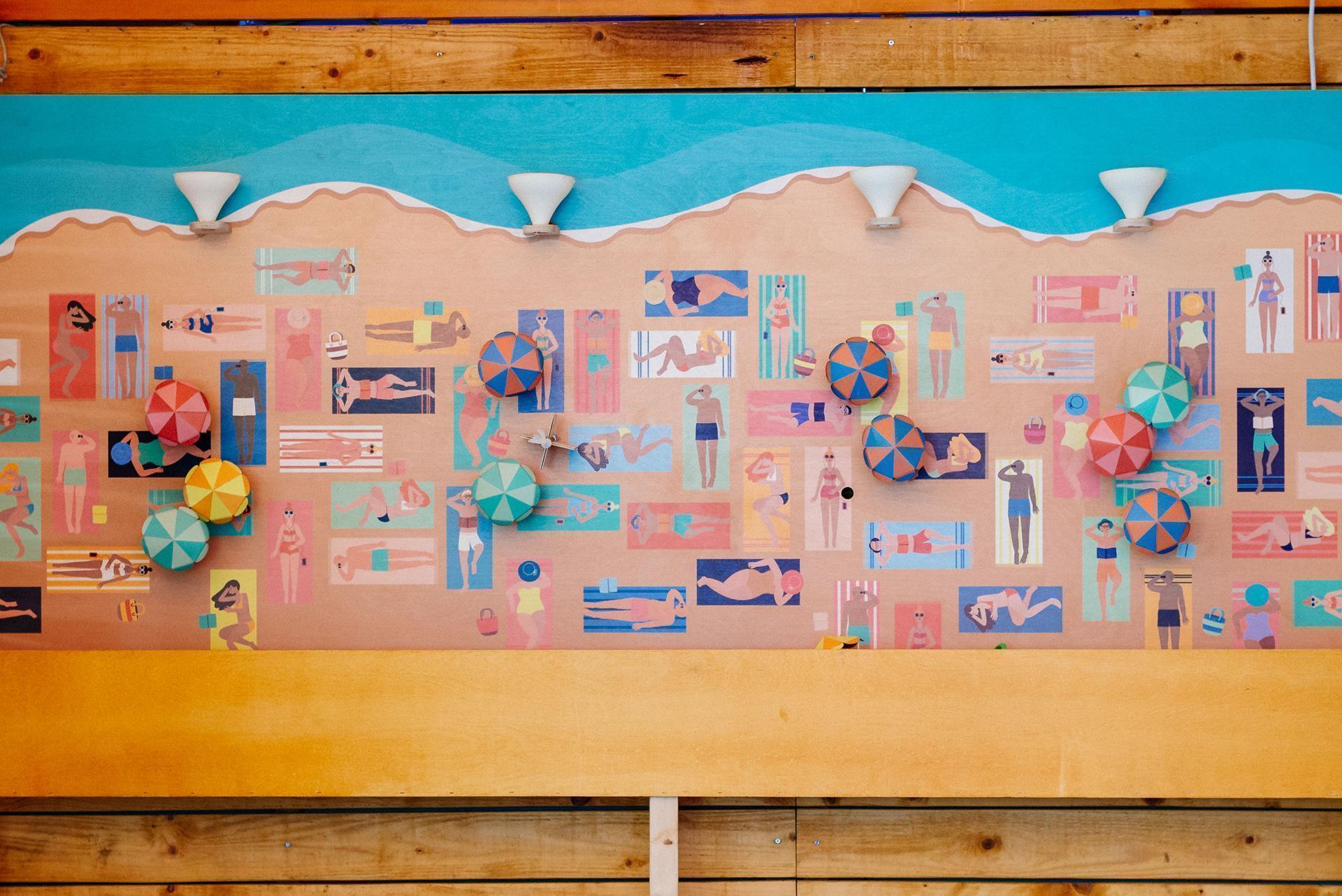 An installation at Azza Bar and Restaurant by Daniel Nahmias and Noa Kelner, who are part of the Jerusalem Design Cooperative, a Jerusalem-based studio that strives to create a community of local designers.

In what ways do you think the complexity of a place like Jerusalem influences designers and their work? And what is the role of design in such an environment, or what should it be?
As the spiritual centre of the world’s three major religions, Jerusalem is a very diverse and emotional place. It is the focal point for the politically charged, sensitive issues that are occurring here in Israel as well as internationally. Yet we see innovative and inspiring design created here, and I think that is because complexity breeds creativity. To be able to solve, or at least understand or address a complex problem, one needs to be highly imaginative, and the unique situation and complexity of Jerusalem fosters a special atmosphere for creativity and design.

I think designers, with their ‘out of the box thinking’, play a very important role in trying to find functional solutions to various problems. I think more people now realize the strong impact that design can have on our day-to-day lives as well as on some bigger issues. 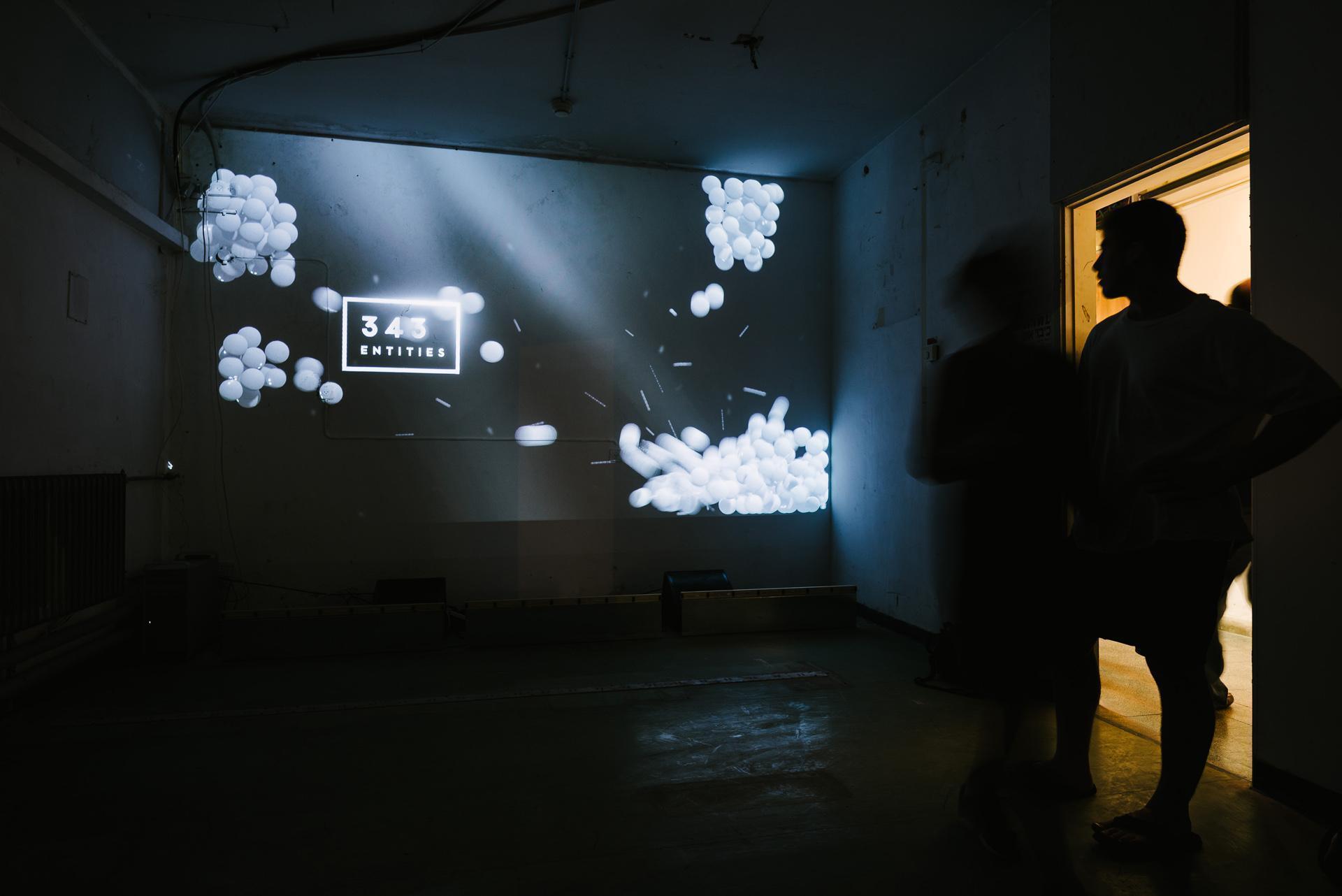 Israeli interactive designer Matan Stauber collaborated with illustrators Yaniv Torem (Israel) and Bee Grandinetti (Brazil) to create an interactive installation that addresses the notion of community formation, as it constantly reacts to the presence of stangers/visitors.

In my opinion, people should work together and exchange knowledge and expose themselves to new ideas. The International Team Programme is therefore an excellent platform for cultural exchange and dialogue. It’s about making connections and bringing together people from different backgrounds to create and design something meaningful to them. I feel the works presented in this year’s Jerusalem Design Week reflect the values of pluralism and forward thinking, a line we try to embody at the Hansen House as the main center for design and new design in Israel. 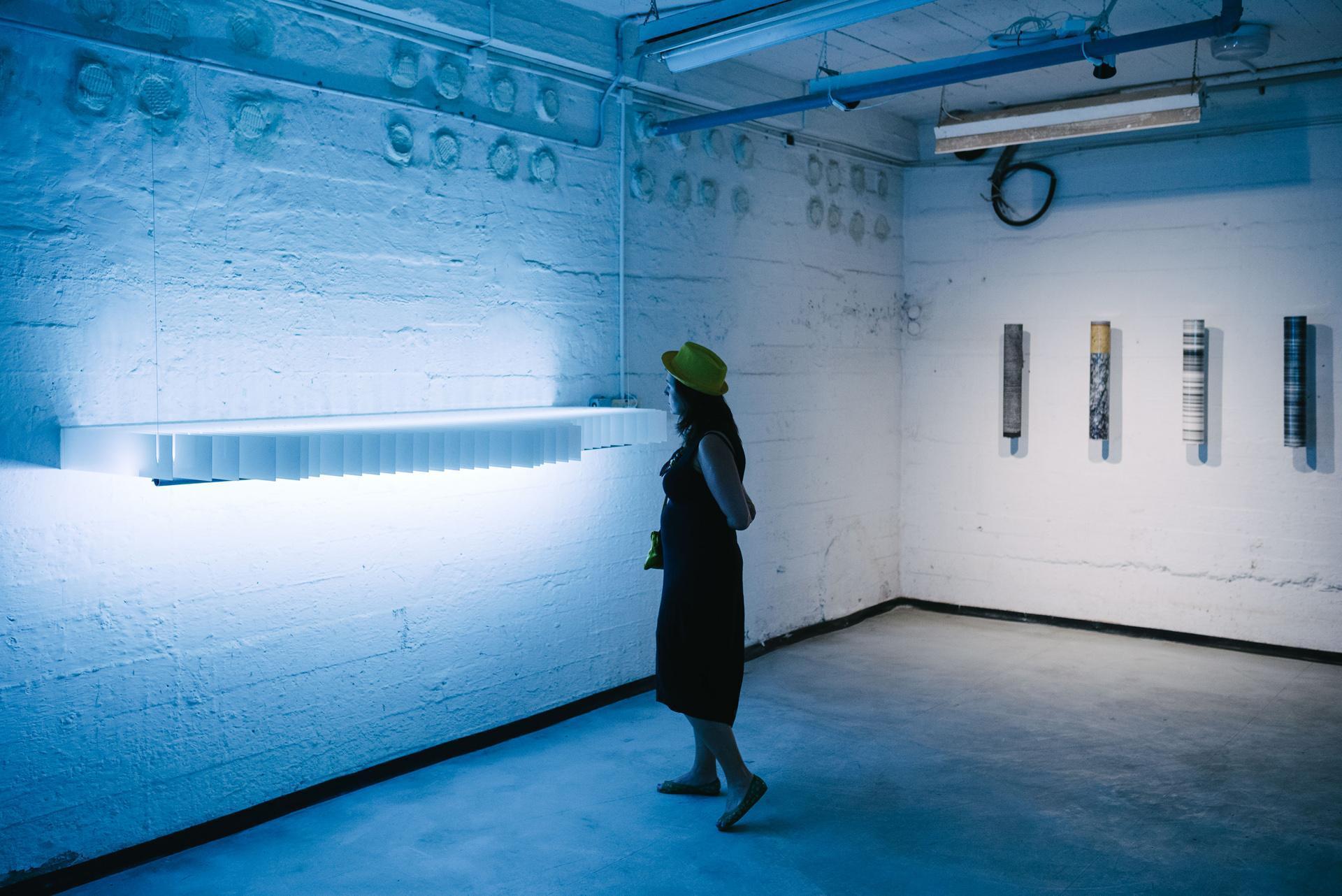 Israeli artist Johnathan Hopp and Danish designer Peter Ørntoft exhibited a utopian work that calls attention to Larsen C, an iceberg roughly the size of the westbank, which is slowly detaching itself from Antartica.

What direction do you see the Israeli design scene evolving in in the future? Who are some of the vanguards leading the way that we should keep an eye on?
Jerusalem’s design scene, and Israel’s more extensively, is very dynamic and is rapidly gaining international interest. Because of this, the government, mainly the Ministry of Jerusalem and the Jerusalem Development Authority, is starting to take notice and realise the importance of design, allocating more resources to promoting the work that is being done here in Israel.

What we are experiencing today is a trend of designer collaborations and design cooperatives where designers from different disciplines work together to create amazing work. Similar to what the Jerusalem Design Cooperative did with their transformation and creative embellishment of some of Jerusalem’s small businesses located on Azza Street, effectively turning these spaces into public works of art.

Some up-and-coming studios and cooperatives that I think are really leading the way on this trend are the Jerusalem Design Cooperative, Bakery Design, and Erez Navi. 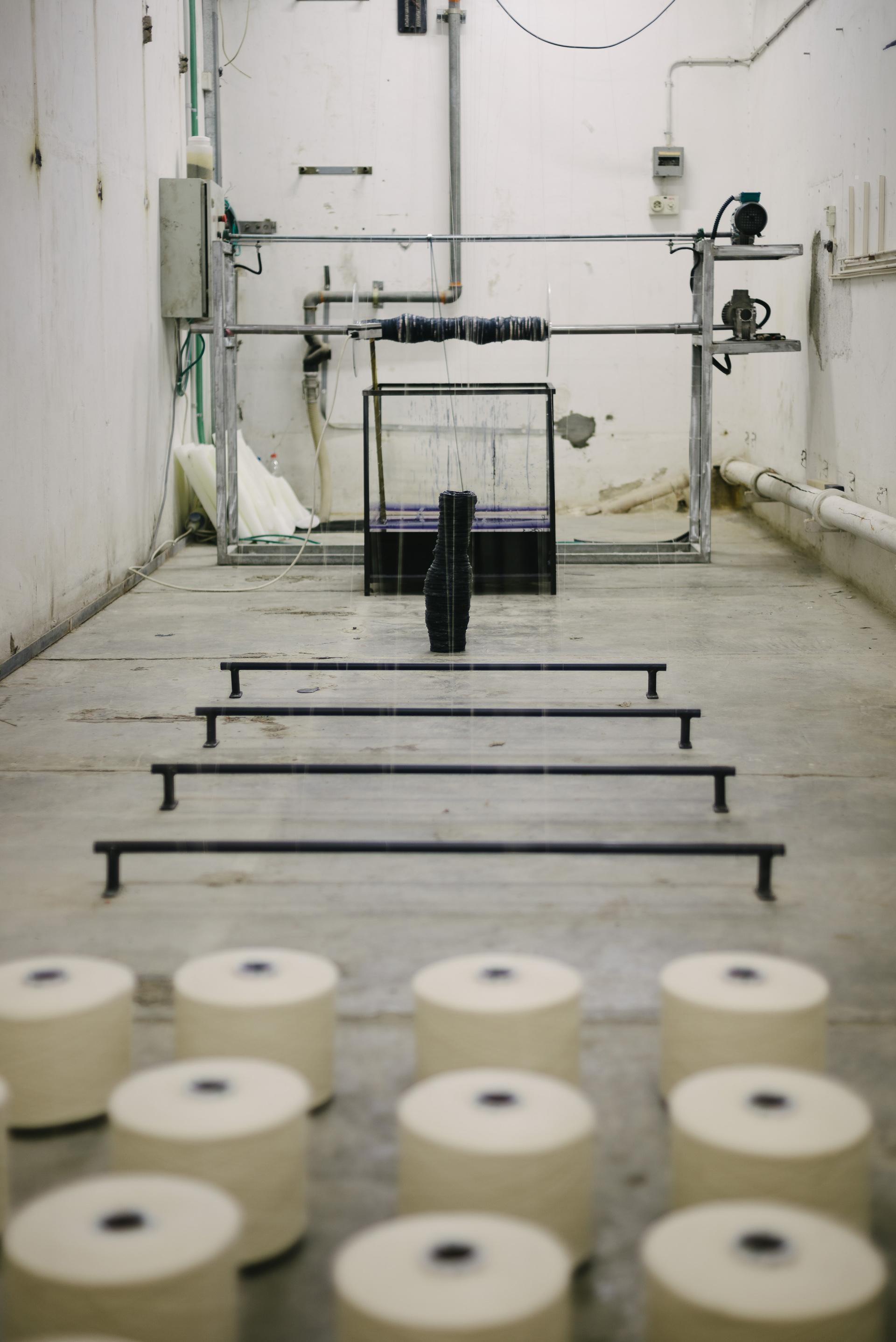 Erez Nevi Pana and Marlene Huissoud were inspired by news in our networked world, where headlines stand out for a moment and then disappear. They created a machine which produced candles that they subsequently burned.