CEBRA’s lavish copper staircase is a beacon for sparking curiosity

The Experimentarium is a much-loved science centre that has been in its current location since 1991, with a mission to ‘stimulate interest in science and to increase awareness of methods and results’ within the discipline. Less than 10 km north of the Danish capital, the educational attraction is located in a small town which is counted amongst the wealthiest areas in the country. Architecture firm CEBRA has recently completed a three-year renovation of the former Tuborg bottling plant, designed in 1923, during which time the museum moved to a temporary address in warehouses situated by Copenhagen harbour. 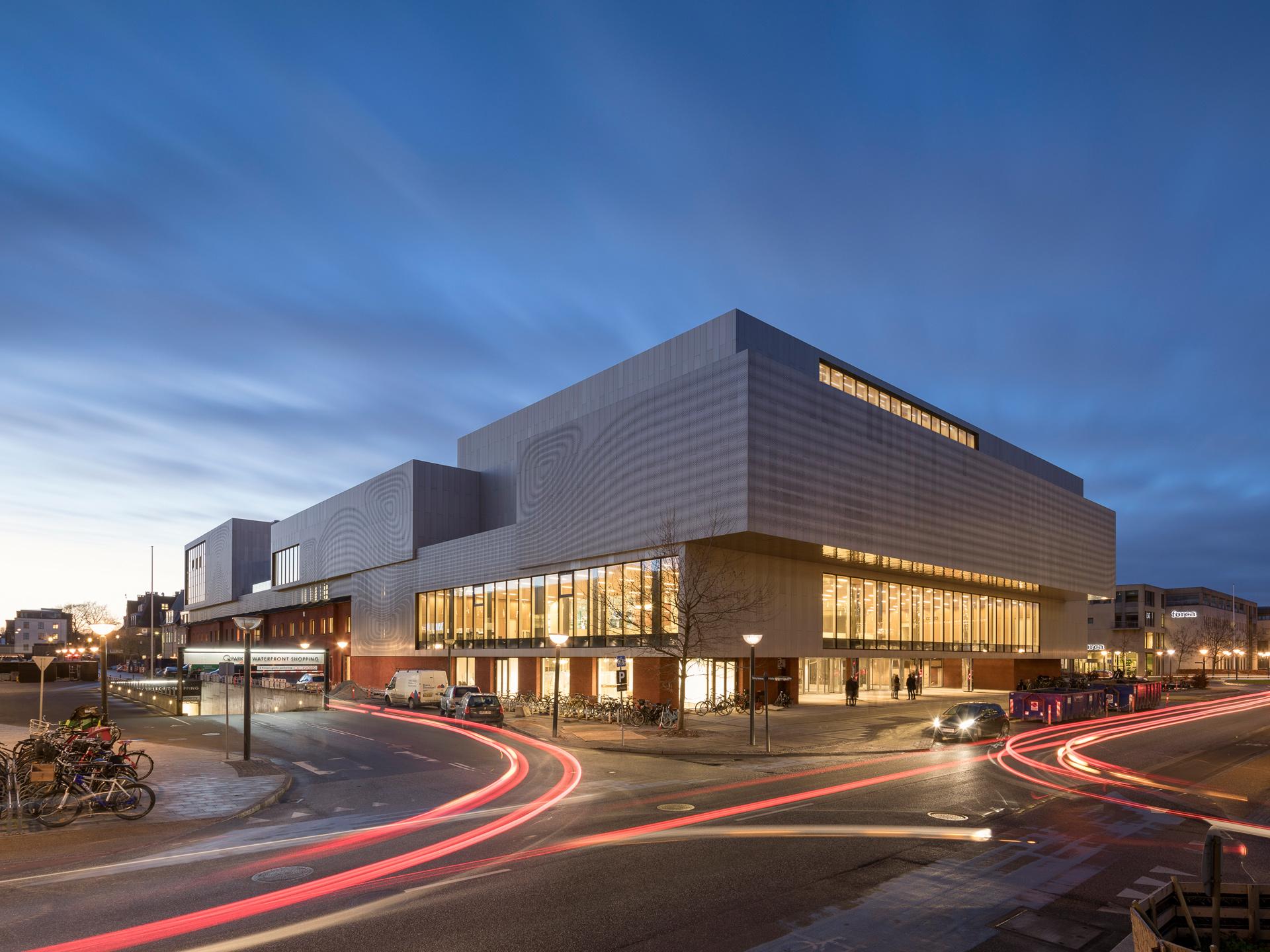 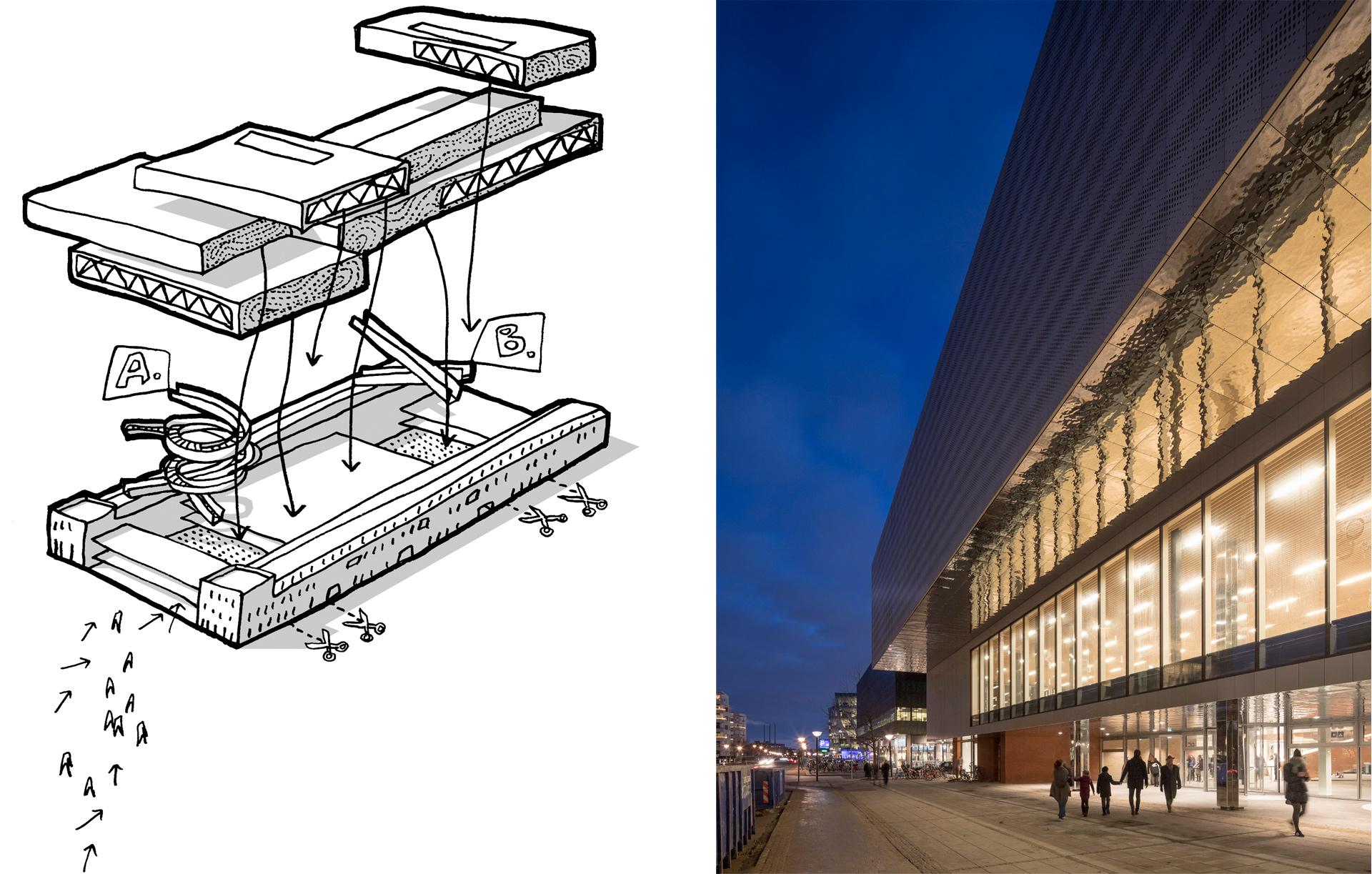 The firm has doubled the size of the centre with an intervention that resembles a series of stacked boxes, offset at different heights and cantilevers, which opens up to the surroundings with large glass windows, making the building’s different functional areas obvious from the exterior. Primarily built using prefabricated elements, the new addition was built on new foundations set inside of the existing building, with the lightweight façade of perforated aluminium panels anchored to the underlying construction. 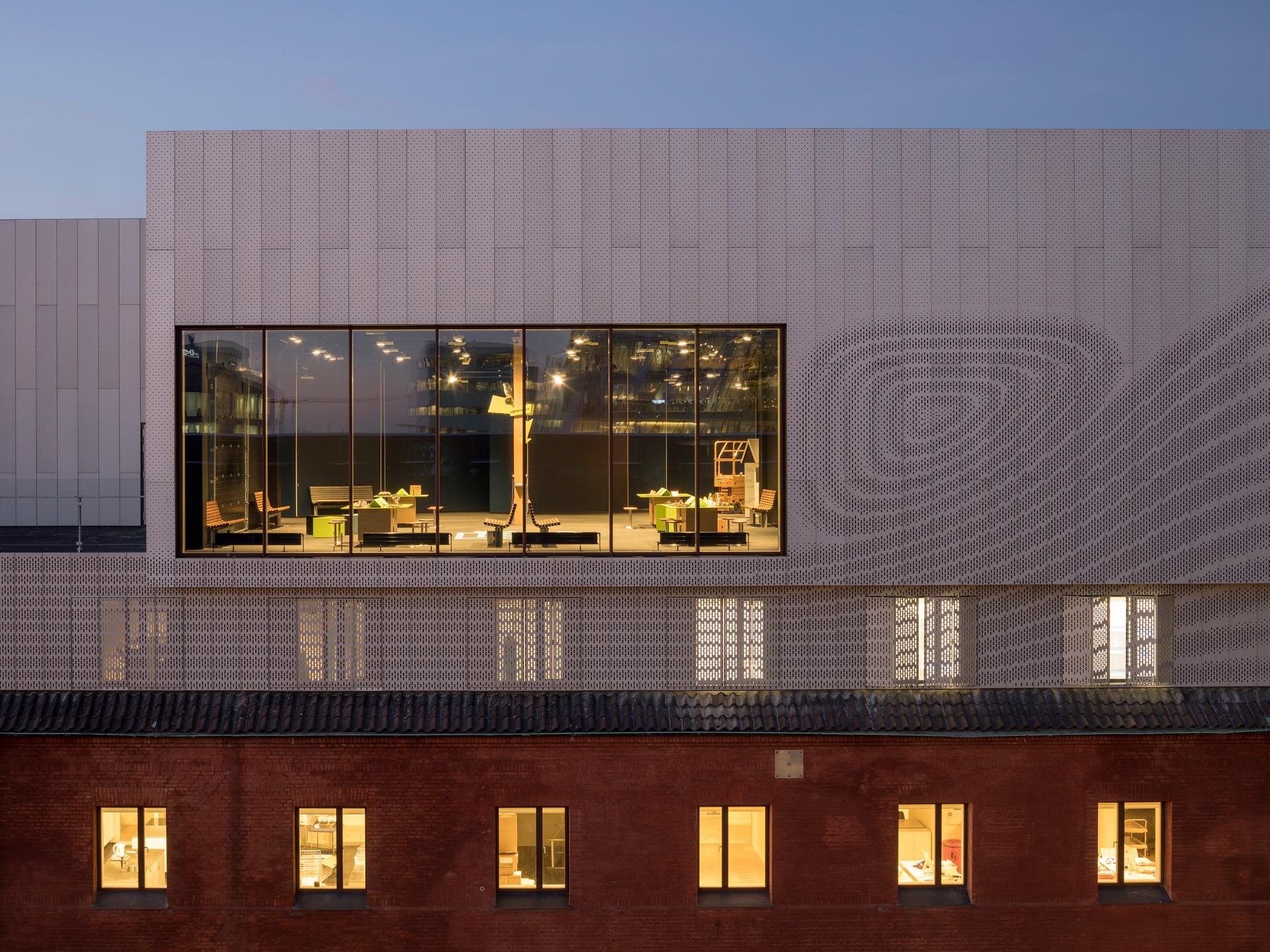 ‘We preserved the building’s original brickwork to emphasize the contrast of the old and the new,’ describes founding partner Kolja Nielsen. ‘We specifically wanted to stress the meeting between the existing and modern architecture, as it complements the radical change of the Experimentarium’s architectural design from an introverted building to now appearing as an engaging and vibrant attraction.’ 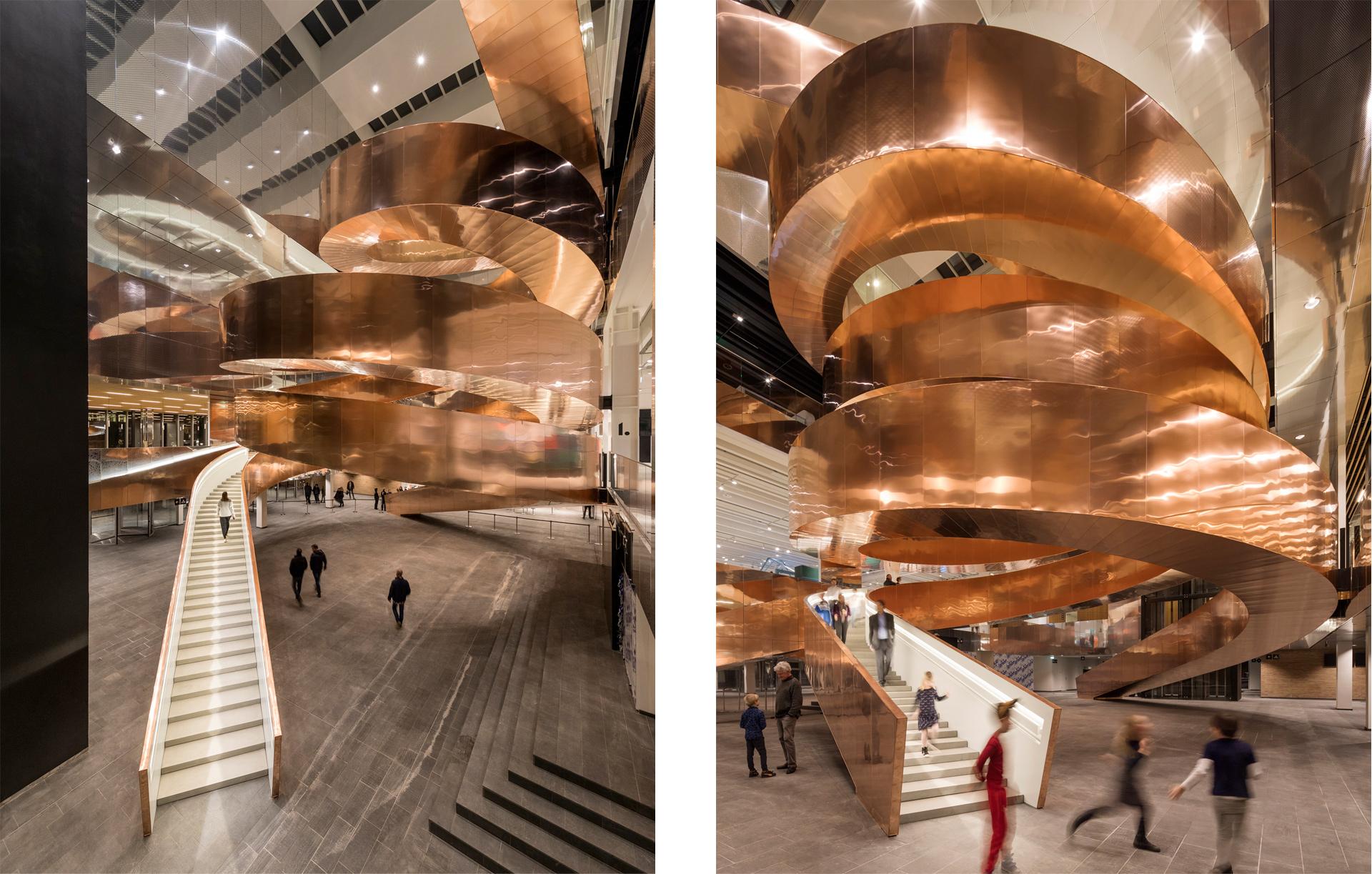 The architect makes visitors feel like wide-eyed magpies, subliminally attracted to the large, shiny structure in the entrance hall. Students are taught the general rule that ‘spiral staircases take up too much room’ but the project’s helical flight of fancy fully owns the building, as if the external structure was built around it merely to try and contain it. The lavish copper staircase – set in a hall clad with reflective aluminium composite panels – is a beacon for sparking curiosity. It is a stunning spectacle that welcomes visitors into the building and is intended to let them know right away that they have ‘entered a world of science’. 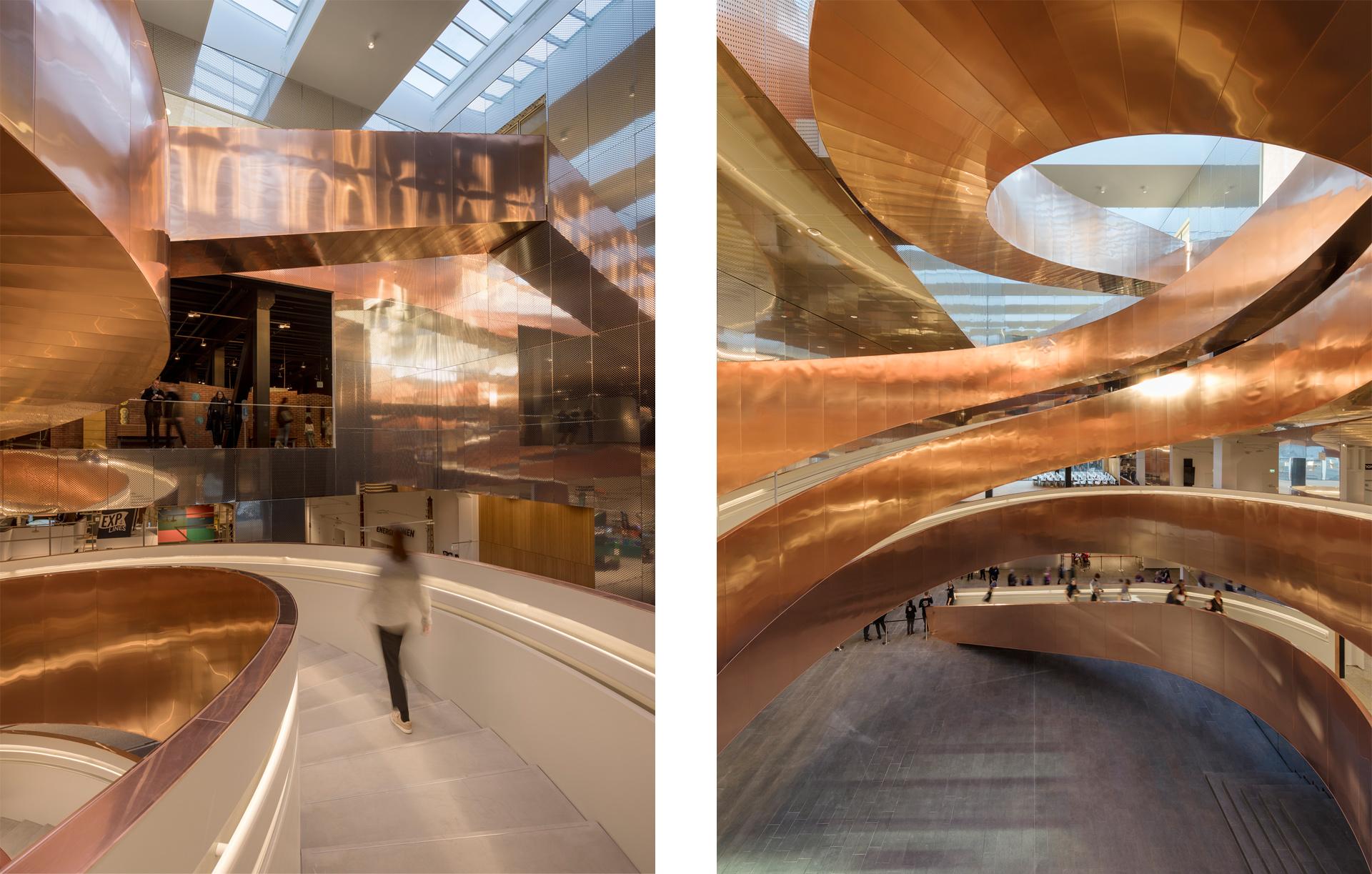 ‘In the competition phase, our proposal included a coiled, tendril-shaped staircase. During the design development, we decided to create two flows of circulation: one to lead visitors to paid-exhibition areas and the other to lead guests to the restaurant, the conference centre and to a rooftop café,’ Nielsen explains. ‘To further qualify the concept, we held a workshop with Professor Jakob Bohr, who inspired us to look at the staircase as an abstract version of the structure of DNA. This unites the two flows and, at the same time, communicates the scientific content of the building.’