There is a pantheon-like space in the middle of the reading area at the Zhongshu Bookstore in Xi’an. Placed in the center is a delicate display for a single tome, the employees’ chosen book of the month… which, due to the design of the space, can only be held by one person at a time. The floor slab is a glass floor that mimics the surface of water, and the space underneath holds a meeting room. ‘This invisible academy and the visible pantheon together form the center of the Zhongshu Bookstore – an oasis where the mind and soul can be rejuvenated and set free,’ explained Yu Ting, the chief architect behind Wutopia Lab’s proposal. 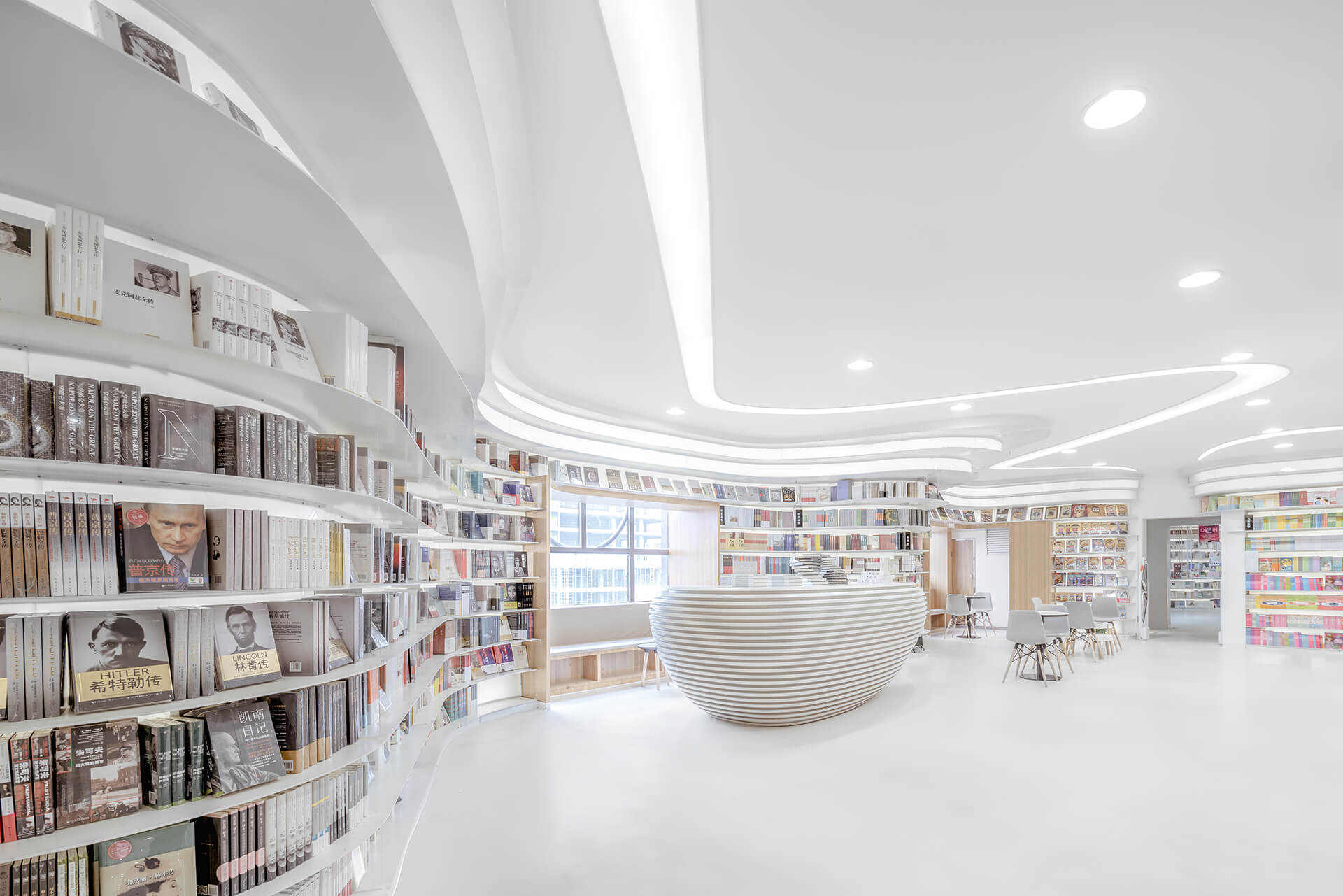 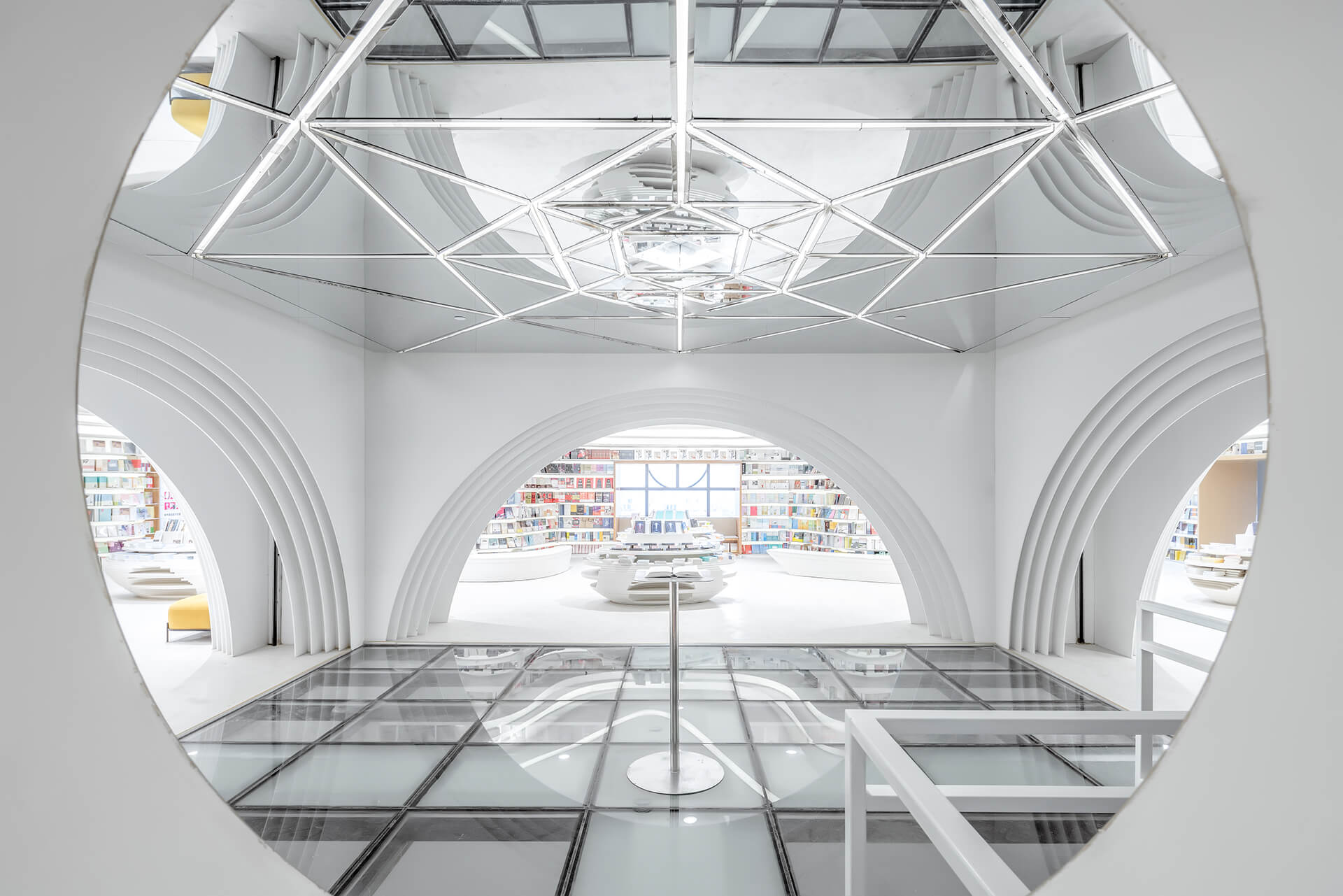 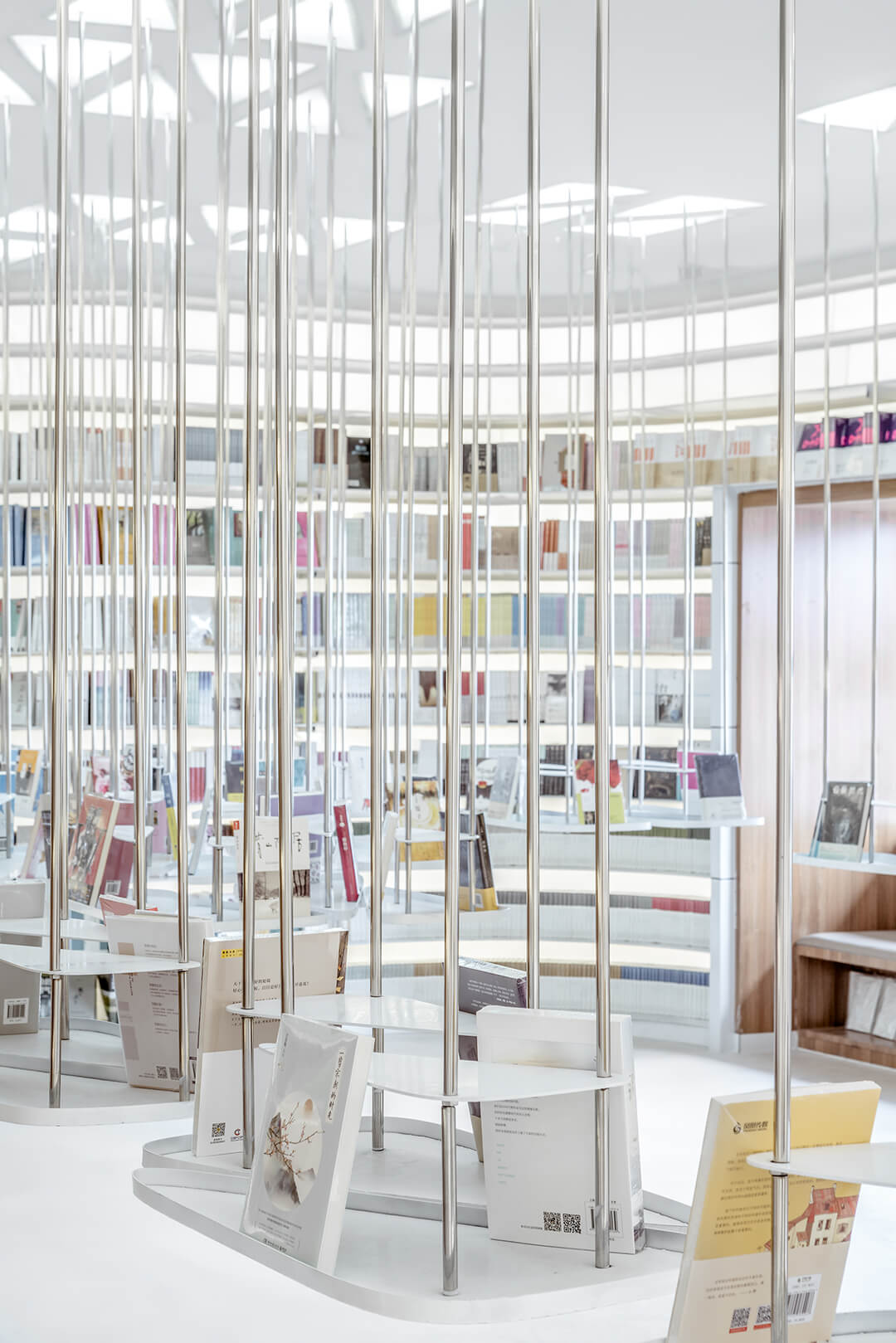 With beautifully dramatic touches such as this one, it’s ironic that the project has been named White Comedy. But the location deserves it: Xi’an the oldest of the Four Great Ancient Capitals and the home base for thirteen dynasties. As such, although it went through a turbulent political period during two thirds of the twentieth century, it is historically known for its flair for grandness – the city, after all, gave the world the Terracotta Army of Qin Shi Huang – which Wutopia Lab honoured in their interpretation of a communal reading and retail space. That’s why, instead of creating a direct entry to the store, they played with the floor slabs of the fourth and fifth floors to create a massive, pillarless white staircase surrounded by custom-made acrylic walls. ‘Readers coming from their everyday life are encouraged by the spirit of knowledge and curiosity displayed through the books around them, to enter what we’ve called a reading paradise over the clouds,’ Yu said. 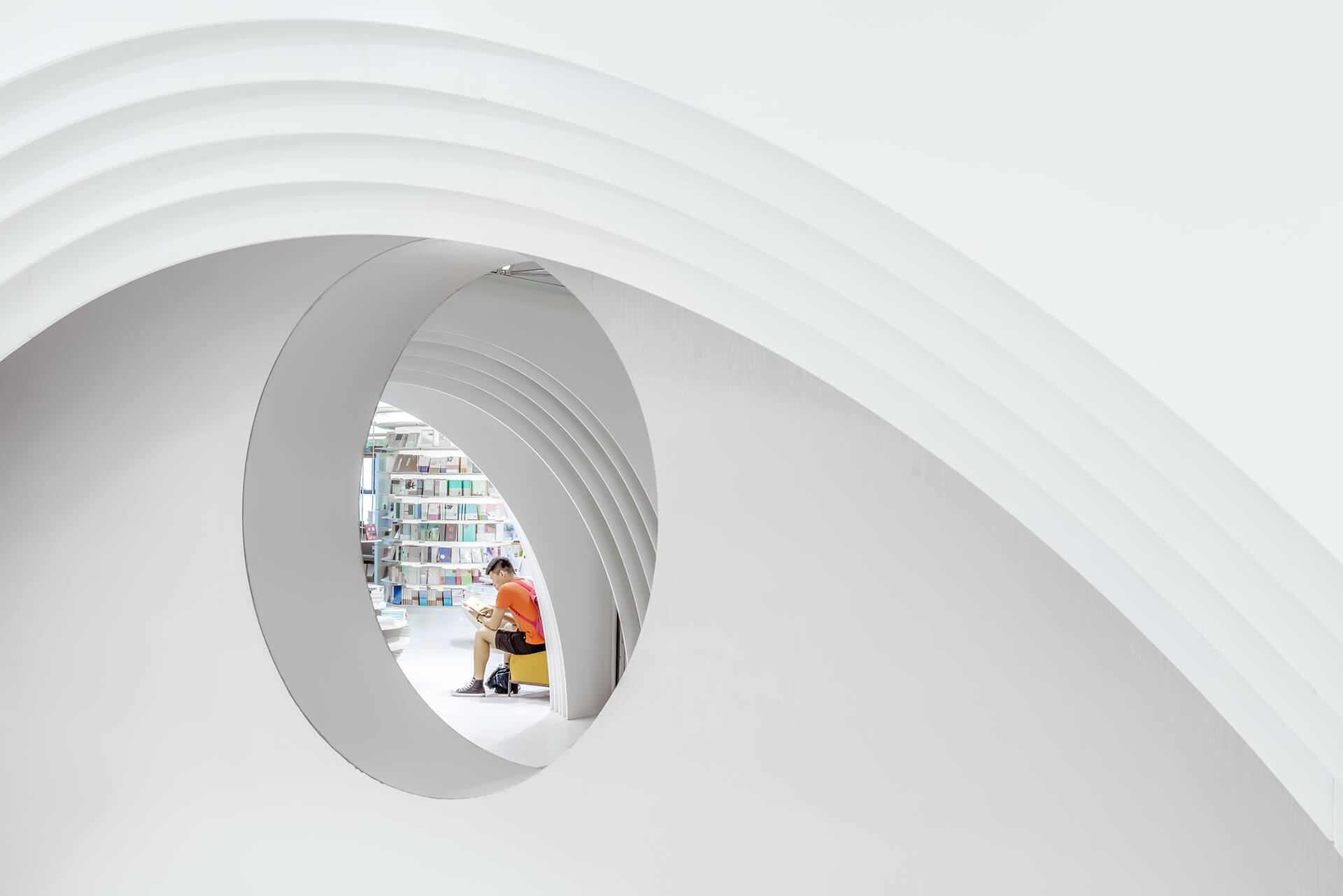 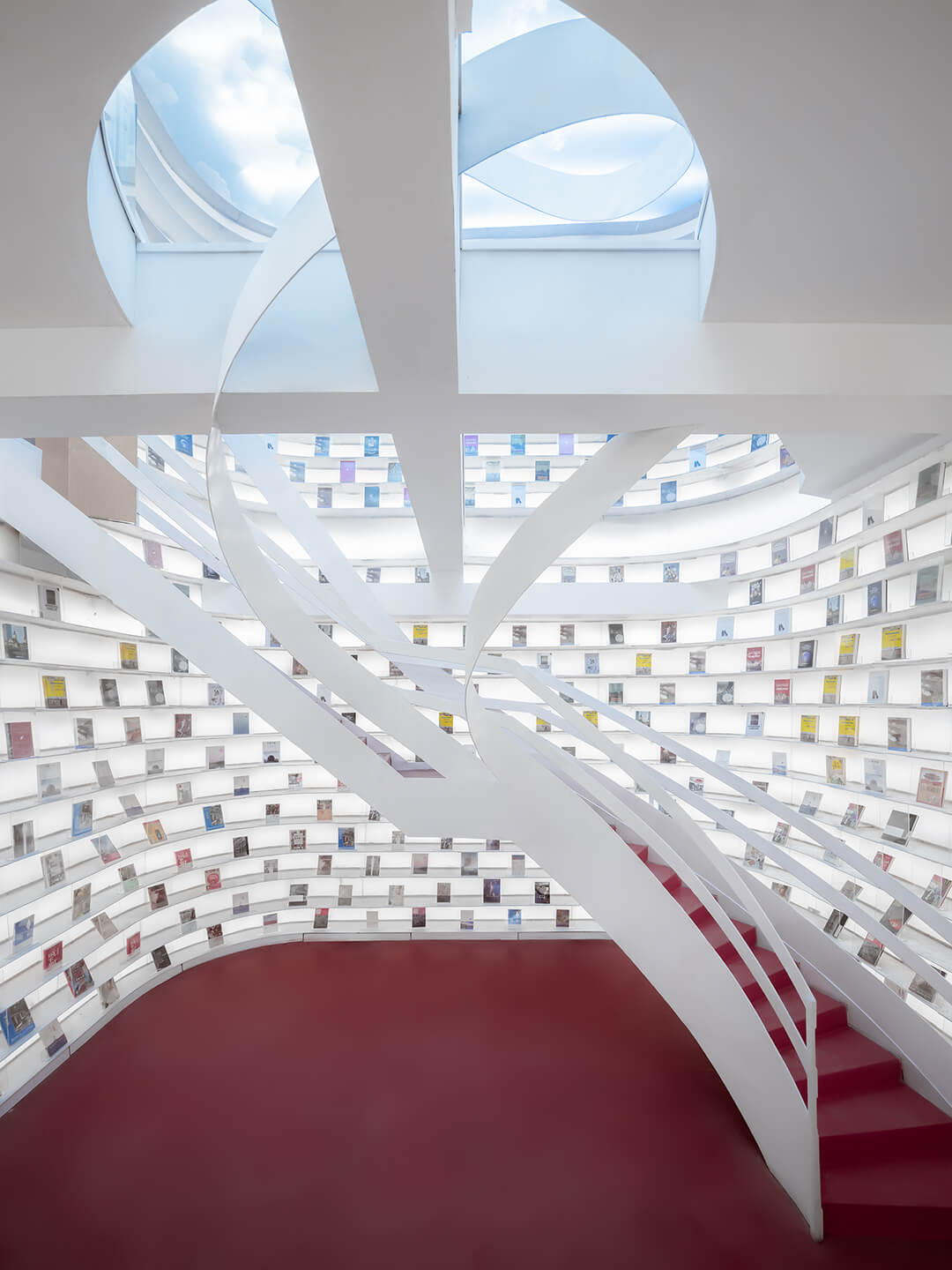 They achieved that impressive lightness through some rather hard material and layout challenges, due to fire code and building restrictions. For example, they used 5-mm-thick steel plates to create customized bookshelves that leave the space with no sharp corners; the resulting piece floats in the air as a cantilevered structure, and is part of a total 300 tonnes of steel used in the project. Each plate is a testament to a combination of technological precision and trained craft, having been processed by CNC tools and then assembled on site.

The overall result is also a testament to the swift and exponential regrowth of the city itself. ‘The design and construction of this bookstore also represents the great urban revival that Xi’an is currently experiencing,’ offered the architect. ‘The bookstore is filled with various kinds of ancient souls of various temperatures with pure thoughts, memories and hopes. Zhongshu Bookstore pays tribute [to the city] and performs a white Divine Comedy to the capital of thirteen dynasties.’